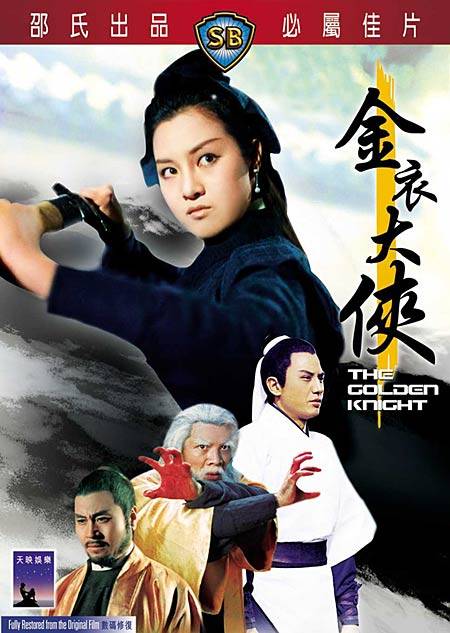 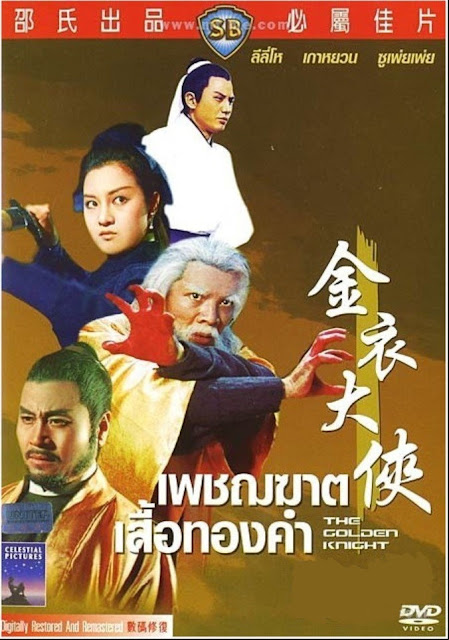 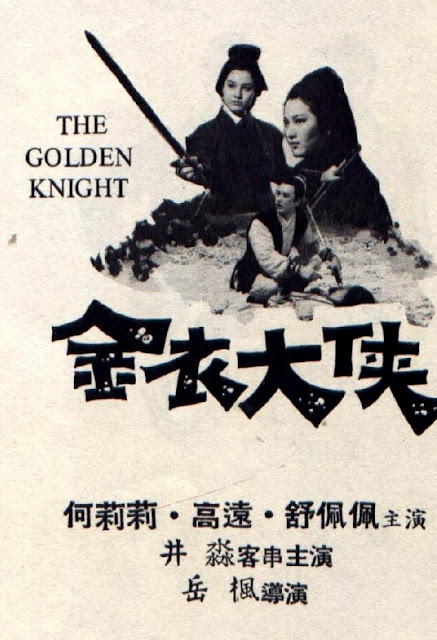 Producer Runme Shaw gives us THE GOLDEN KNIGHT (1970) a wuxia, suspenseful who-done-it with an complex script by Liang Yen (Yip Yat-Fong) [Black Butterfly 1968)] and [The Jade Raksha (1968)] co-written by Huang Feng (Wong Fung). It released April 17th and was directed by Yueh Feng [Rape of the Sword (1967)] and [The Bells of Death (1968)] with action direction by Han Kuo.  (A word about the title: in Chinese there is no such convention as adding an "s" to indicate plural nouns so the title in English could have been translated: THE GOLDEN KNIGHTS and as such would have been much more accurate considering the events of the movie. )

It is a solemn day for the Jiang Hu. The Supreme Grand Master, having been very ill and recognizing his time on earth is nearing an end, has written manuals of his six martial skills to give to six of the major heads of the martial clans. The Poison Palm, the Zen Finger, the Azura Sword, the Deadly Sabre, the Jingang Palm and the Iron Body manuals are all ready to be given to the grand masters of the six major clans on the appointed day at the appointed hour.

The Tongxin Clan Golden Knights are the court of justice for the Jiang Hu and all matters of law are brought before them. Shortly after the murder and disappearance of the Supreme Grand Master and Grand Master Yu, the Iron Body Manual was stolen from the Huashan Clan and the Deadly Sabre manual was stolen from the Kongdong Clan with members of both clans being killed in the process. There were two attempts made on the Zen Finger manual at Shaolin Temple but they were both unsuccessful, no one was killed and the manual was not stolen. Circumstantial evidence points to the daughter of the missing, Grand Master Yu Yun-Yang, Yu Fei-Xia --but did she commit these crimes of murder and theft, or did someone else?

FIGHT TIME: THE GOLDEN KNIGHT (1970) credits Han Kuo with the action direction of the movie but director (Griffin) Yueh Feng has too much of a heavy hand with his hand held shaky cam that readers of my past reviews know I am not a fan of. There were only six (6) fight scenes in the entire movie and they were not too bad for what I could see of them but the constant movement of the camera really robbed me of a clear view in many of those scenes and it was very annoying. That said, Han Kuo kept the movie's pace fast and exciting and I hardly noticed that there could have been another fight or two just for good measure. An acceptable performance.

THE GOLDEN KNIGHT (1970) is a movie that, as I think about it, is probably easier to experience by Mandarin Chinese speakers than by English subtitle readers. The double flash-back one third in the movie that is actually the movie's beginning along with the lack of detail in the subtitles about just who The Golden Knights were leaves one playing catch-up quite a bit on the first viewing. If that wasn't challenging enough if the viewer has no knowledge of the Jiang Hu then the viewer really needs to watch the movie a second time before it feels like a smooth story-telling.

If the viewer does bother to view the movie a second time and think along the lines of an episode of Law And Order Criminal Intent then they have a much better chance to discover the well crafted (but hard to translate) "who done it" scripted by Yip Yat-Fong and Wong Fung. This is one of those movies I believe would do well as a modern remake with jacked-up martial arts scenes. As it is, I can still in good conscious recommend it for ones casual viewing pleasure but as a collectible, maybe not so much. See you next time!