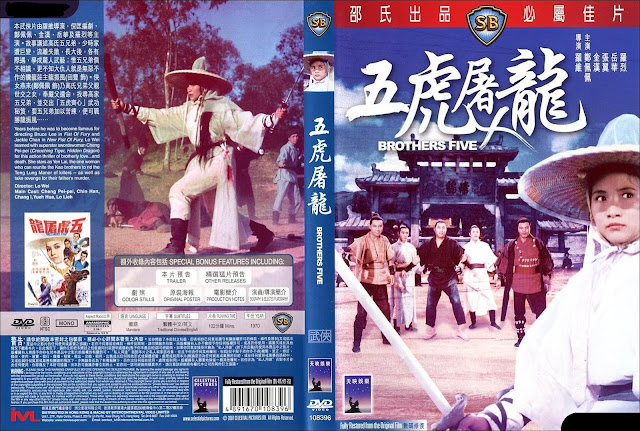 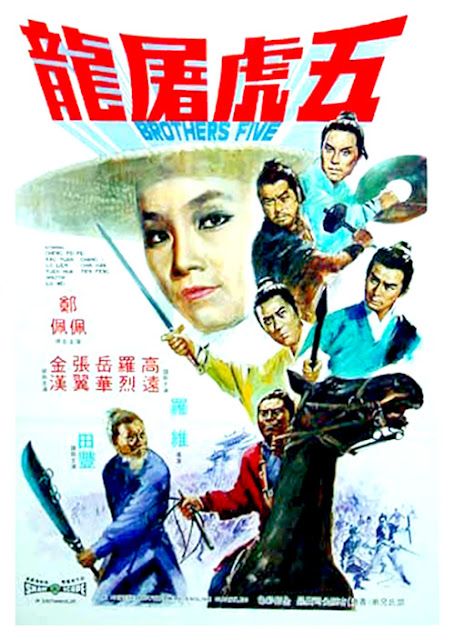 BROTHERS FIVE (1970) (released March 26th), is produced by Runme Shaw, the elder of the two brothers. It is written by Lo Wei and I Kuang, two very skillful and talented screen writers with a deep understanding of the genre. The action direction is handled by Simon Chui Yee-Ang and Chu Yuan Lung (better known as Sammo Hung Kam-Bo) and they are also very skilled craftsmen to say the least and the whole kit and kabootle was directed by the very prolific Lo Wei. Let's get busy!

However, one could not expect a man the likes of Hero Gao Shi Yu to go quietly into the night. On his death bed he he asked his close friend Yan Hang Kong to help his sons escape Flying Dragon Villa. Yan Hang Kong escaped with the five boys but they were pursued by Chief Long Zhen Feng and his men, The Four Evils of Ji Bei. Enlisting the aid of some martial art instructors, Yan Hang Kong separated the five brothers but told his young daughter, Yan Hsing Kung, all about Hero Gao and his five sons. After her father's death, she set out to find the locations of the five brothers and reunite them to take revenge with the help of a secret martial arts manual. Will she succeed?

FIGHT TIME: BROTHERS FIVE (1970) was action directed by Hsu Erh Niu and Chu Yuan Lung (Sammo Hung). I counted twelve (12), that's right twelve fight scenes which is the most fights scenes in any movie I have counted yet so far. The work is absolutely one of high quality with the under cranking expertly done except in some of the exchanges in the finale fight scenes. Nothing new but still exciting none the less.

BROTHERS FIVE (1970) has a veteran director, two of the most skillful script writers in the industry and one of the two action directors on the project will go on to become arguably one of the best action directors from Hong Kong. The actors of BROTHERS FIVE (1970) are some of the best Shaw Brothers has to offer. And BROTHERS FIVE (1970) is a good movie, in fact it is a very good movie. BUT, but... It just seems to me to be a little off Shaw Brothers' usual overall high quality and I need to be honest about it. So what's wrong? Well, it just seems to me that the movie belongs more to the Shaw Brothers of the sixties than the Shaw Brothers of the seventies. Bottom line though, it is still worth watching and I can recommend it for casual viewers of wuxia movies but for collectors --not so much. See you next time!