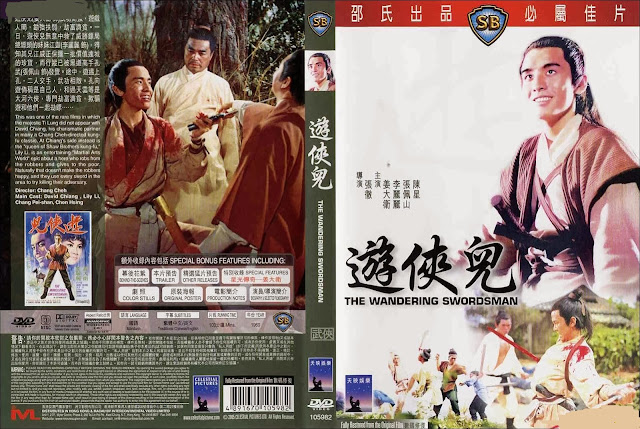 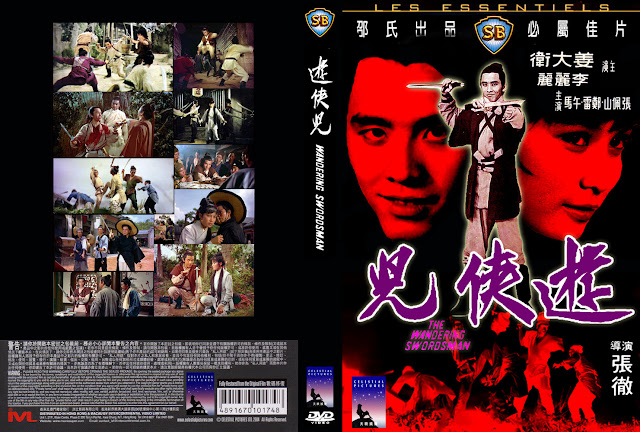 Sir Run Run Shaw produces another masterpiece by the director / writer team of Chang Cheh and I Kuang. THE WANDERING SWORDSMAN (1970) was released on February 4th and is a look at the day in the life of a swordsman walking the Jiang Hu who is highly skilled but is still very inexperienced.  At the root of the film is an unusual  heist that our hero stumbles into. Yuen Cheung-Yan and Chan Siu-Pang share the action directing duties and Yang Sze (who becomes known as Bolo Yeung) has his acting debut. Let's get busy!

You Xia-er is a young wandering swordsman. Although he is very highly skilled he is also inexperienced and very happy-go-lucky. Strictly by chance he follows a pair of horsemen and overhears them plotting the robbery of a rich family. While he makes no attempt to stop the robbery, he does take the booty from one of the robbers after the event and gives it to a large number of refugees from a river flooding. Then, because of a misunderstanding, he haplessly gives the refugees all of the money he has on him.

This causes him to have no money to pay for his meal which forces him to attempt to pawn his weapons to the restaurant owner. However during the owner's refusal, a nearby ruffian, seeing an opportunity to gain an advantage of some sort, buys You Xia-er's weapons and then quickly leaves the premises. Anxious not to permanently lose his weapons You Xia-er follows the ruffian to attempt to get his weapons back.

During the chase You Xia-er realizes if he had a horse he could catch up to the ruffian and reacquire his weapons. While figuring out how to do just that, he happens across yet another ruffian about to victimize a young girl after killing her companion. He saves her by chasing off her attacker.  He then escorts her to safety and borrowing a horse once again goes after his weapons.   While searching for the guy with his weapons he decides to go to a gambling house to get into some trouble and sure enough he gets on the wrong side of the casino manger by cheating the house at dice.

While getting away from the casino with his cheated money, he spots the ruffian he sold his weapons to. He follows him back to where the ruffian is staying and then decides to steal his weapons back and to rob the ruffian of his personal belongings including the guy's silver. While fighting the ruffian he just robbed, little by little all of the people that he has had "issues" with turn up and they want his ass. However, the leader of these ruffians also shows up, is briefed on what is going on, and appreciating the You Xia-er's kung fu skills has a much better idea on what to do with him. A day in the life of a wanderer, indeed!

CAST REPORT
the "good": David Chiang as You Xia-er : the star of the show and perfectly cast for his smile and charm and brilliantly showcased by director Chang Cheh who informs us with the first close-up of this character not to think of him as the same character from Have Sword, Will Travel (1969) because no matter what the similarities may be they are very, very, different. Lily Li as Jiang Ning who adds just a dash of female to the mix, and Cheng Lui as Security Chief Jiang Wei, the little guy with the big muscles.
the bad: Chang Pei-Shan as "Fail Safe" Kung Wu, the mastermind of the heist. Wan Kuang-Yu as Single Swordsman Jin Li Loi. Wu Ma as Foxy Hou Jiou, and Chen Sing as Iron King Jung Sze Hu.
HONORABLE MENTION: Yang Sze (Bolo Yeung) in his first movie, Wang Cheung, the Yuen Clan: Yuen Cheung-Yan, Yuen Shun Yi and Yuen Woo-Ping and the late Hsu Hsia.

FIGHT TIME: THE WANDERNG SWORDSMAN (1970) has plenty of action, I counted eight (8) fight scenes including the heart stopping finale in its one hour and forty-eight minutes. The two fight choreographers do an excellent job of telling the story of the action, although one of them: Chan Siu-Pang, I am not familiar with, but the other one: Yuen Cheung-Yan is very well known today but even in 1970 his work is quite good. No disappointments here.

THE WANDERING SWORDSMAN (1970) is by no means David Chiang's first appearance on film but it is the first time his smiling persona and his charm is used as a character trait that will become his trademark in the years to come. That fact and the fact that this is a very good movie makes it a no-brainer to recommend for all viewers and collectors alike. See you next time!