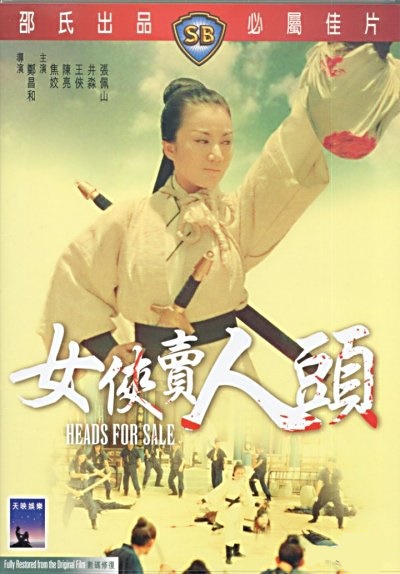 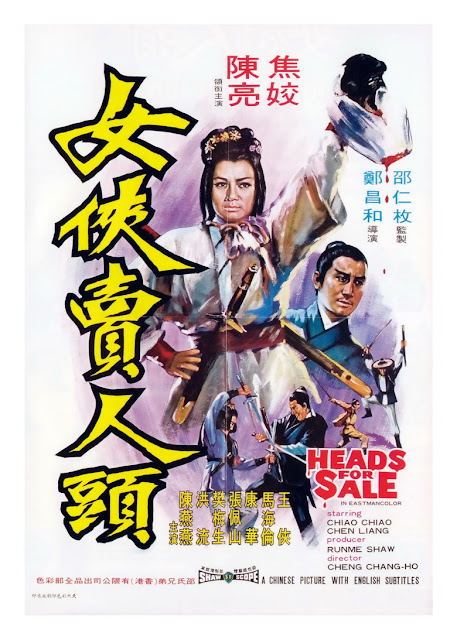 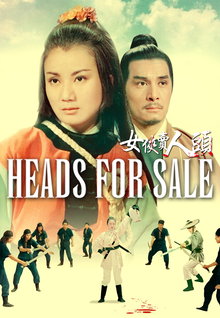 This time Producer Runme Shaw teams up Director Walter Chung Chang-Hwa with the gifted Script writer Yip Yat-Fong for HEADS FOR SALE released May 6th, 1970. Wild and interesting, with plenty of action but no action director, I can't wait to get into this one, so --let's get busy!

Hua Chen-Fang had long turned over a new leaf. He had been a "successful" burglar to the extent that he was able to retire with his wife and daughter and live in a modest comfort. Everyone in the Jiang Hu knew of his past life but because he had never harmed anyone, everyone could tolerate his presence. However when his daughter, Hua Bi-Lian, became of the age to marry, no one would accept her hand. To Hua Pi-Lien, herself, this was not a problem until the one man she did fancy: Luo Hong-Xun, also refused to marry her. Hua Bi-Lian then set out to confront him.

Luo Hong-Xun attempted to reason with Hua Bi-Lian but she was too enraged. So, during their fight, he pretended she struck him and she was suddenly taken aback and raced off on her horse. After a while, however, Hua Bi-Lian's parents came to the Luo's home demanding he return Hua Bi-Lian to them. She had gone missing and they thought she was with him. Hong-Xun's mother explains to Bi-Lian's mother what happened and the Hua's take off to find their daughter. Luo Hong-Xun decides to go after Hua Bi-Lian and bring her back to her family.

After leaving Luo Hong-Xun's house, Hua Bi-Lian comes across a man attempting to commit suicide by hanging himself from a tree. She cuts him down and learns he is doing so because he was tricked into gambling and lost his wife away to the gambling hall manager, Wan San-Ju for ten taels of gold. Bi-Lian goes to the gambling house to win back the wife, she gambles and wins the wife back and (of course) is attacked by Wan San-Ju and his men after the fact. During their battle, Hong-Xun catches up to Bi-Lian and jumps in to assist her and together they chases away Wan San-Ju and the remaining attackers.

Gambling hall manager Wan San-Ju goes to report this trouble to his boss, and he turns out to be none other than Huang Lun, an old neighborhood bully and nemesis of Luo Hong-Xun. Times has been very kind to Huang Lun, although he has a scar and the bad memories of his run in with Luo Hong-Xun to keep him company, he can hold his head up because since being forced out of their old neighborhood, prostitution and gambling has been very, very good to Huang Lun and poor Luo Hong-Xun is about to find out just how good.

FIGHT TIME: I counted nine (9) excellent fight scenes in HEADS FOR SALE (1970). Historically, I see "they" have achieved the lateral movement of the "light skill" in wuxia. It looks fantastic! I am very excited to see the future of this technique. Why do I say "they"? Because HEADS FOR SALE (1970) has no action director credited! This is remarkable because the action throughout the movie is so praiseworthy I can't imagine who would not want to take credit for it? I do have a suspect but I dare not say who it is --but the fights are worth the price of admission AND the story is very entertaining, no disappointments here.

HEADS FOR SALE (1970) is a definite recommend for collectors because of the standard for the seventies wuxia fights is established here, in my opinion. Every movie produced after this one has to be at least as good as HEADS FOR SALE or I got problems with it, period. In addition, it is a fun and entertaining wuxia afternoon for all fans so buy or borrow it at all costs! See you next time!