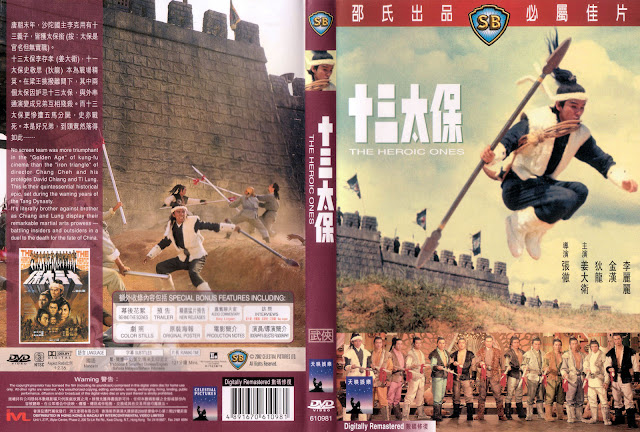 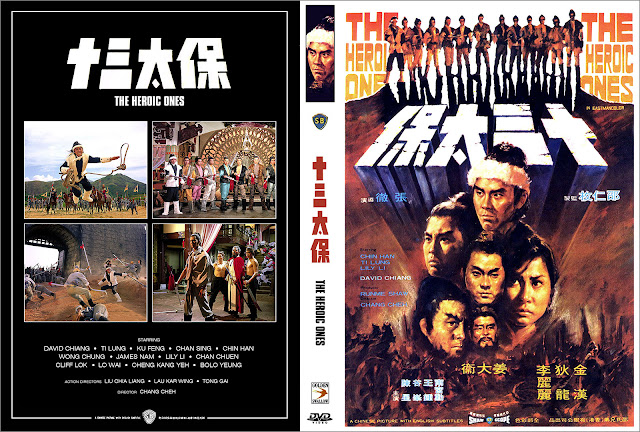 Sir Run Run Shaw produces a historical drama entitled THE HEROIC ONES (THIRTEEN HIGH OFFICIALS) written by Chang Cheh and I Kuang and directed by Chang Cheh. This story is based on an historical event that took place in China during the Tang dynasty where a tribal chieftain came to the aid of the emperor to recapture the capital city with the help of his thirteen adopted sons and the tragedy of the aftermath. The action choreography is done by the awesome team of Tang Chia and Liu Chia-Liang with Liu Chia-Liang's younger brother Liu Chia-Yung also getting action director's credit. Let's get busy!

In 883 during the Tang Dynasty, the Warlord Bandit, Wang Chao rebelled against the Tang Emperor and attacked and captured the nation's capitol of Chang'an. The Emperor, by imperial decree summoned Chieftain of Shatuo, Li Ke Yong to liberate Chang'an and promised to make him King of Jin. Chieftain Li and his thirteen adopted sons, known as the Thirteen Generals, along with 100,000 of his own soldiers and 500 of his personal guards went to a neighboring province to plan the attack. As guest of Warlord and Governor of Bianlian, Zhu Wen, Chieftain Li and his Thirteen Generals entered hostile territory and had to deal with not only the Warlord Bandit, Wang Chao but with the jealous Warlord, Governor Zhu Wen. This is their story.

FIGHT TIME: THE HEROIC ONES (1970) boasts three (count 'em 3) action choreographers and these three are no run of the mill action directors. Tang Chia, Liu Chia-Liang and his younger brother Liu Chia-Yung have a resume that can not be equaled but the action looks like it is a little bit crowded. There is so much going on in the scenes that there is hardly anyway to keep track of it all. However, I can buy that, 1)for the time period it is set in, and 2) the sheer number of combat participants, that this is actually a realistic depiction of army combat. It is just a little rough on the eyes but careful observation reveals quality techniques going on so I am just going to eat the results. I counted seven (7) fight scenes including one nearly 20 minute long but the action builds and supports the story line so it is an absolute win.


HONORABLE MENTION: an exquisite display of spear-play by Ti Lung starting 1 hour and 19 minutes into the film.

The challenge when presenting an historical drama is how to honor the history but still present enough drama to hold the audience. Chang Cheh and I Kuang do just that with their work in THE HEROIC ONES (1970). But still, I would love to see a modern production of this drama in an 40 or 50 episode television show. There are plenty of characters and subplots to merit such a work. I unreservedly recommend this movie for collectors and casual viewers alike and in fact thist is one of the most challenging reviews where I am tempted to reveal spoilers of the plots but please, since I did not spoil the movie please, please, please go and see this movie by any means necessary. See you next time!