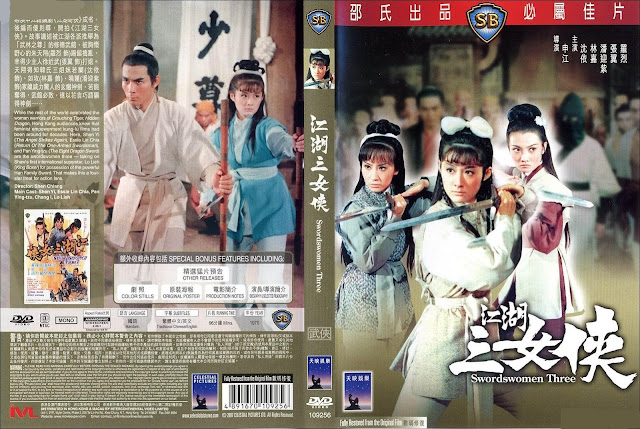 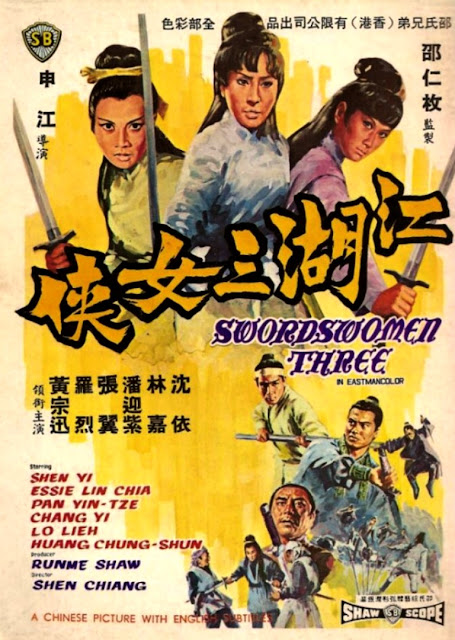 Runme Shaw produced SWORDSWOMEN THREE (1970), released August 5th, written and directed by San Kong (Shen Chiang) with action scenes arranged by Tang Chia and Liu Chia-Liang. The story revolves around a person determined to be the number one swordsman and the head of all the clans in the Jiang Hu even if it means ruining two families to do so. Let's get busy!

In the Jiang Hu there is a martial arts competition held every ten years among the top clans. Should one person win every challenge, then that person is awarded with a plaque from the top clans that reads "Head of Martial Arts". The latest winner of this honor was Xiude Martial Arts Academy's Master Xu Mu Liang.

A young upstart and founder of the new group called The Green Dragon Clan, Zhu Tian Xiang, wishes to lead the martial world so he challenged Xiude Martial Arts Academy for its position and the plaque. But Master Xu Mu Liang was not at the fort but Zhu Tian Xiang (with a betrayal and insults) forced the master's son, Xu Jin Wu to accept his challenge. Fortunately, young Xu Jin Wu won the match but allowed Zhu Tian Xiang to leave with nothing but a scar for his trouble.

The Mighty Steel Sword is a legendary weapon used by the great hero Master Han all over the Jiang Hu for the cause of justice. Besides being a sword of the finest quality it has two unique attributes, one for each side of the sword. On one side, the entire surface of the sword allows blood to drain down from the blade making it a self cleaning sword. On the other side is a powerful magnet powered by the users own chi (life-force) allowing the user to disarm his opponent. Unfortunately, the great hero Master Han has died having fallen victim to an unknown illness. He is survived only by his three daughters.

Ashamed on how badly Zhu Tian Xiang trick her into giving him the Mighty Steel Sword, Han Rou Lan left a note for her two sisters telling them what happened and promising to bring the sword back home. Han Rou Mei and Han Xiao Lian quickly go after their older sister and meet Xu Jin Wu along the way. Xu Jin Wu was on his way to see the three sisters to warn them about Zhu Tian Xiang and is determined to help them retrieve the sword. A chess game of cat and mice plays to an ultimate bloody ending, who do you bet on?

FIGHT TIME: SWORDSWOMEN THREE (1970) has eight (8) fight scenes choreographed by the great team of Tang Chia and the legendary Liu Chia-Liang and it is the quality of these fight scenes that are the most telling of this production (the casting of extras supports this as well e.g. Wu Ma and David Chiang). Although released in 1970 anyone familiar with the work of these two masters can tell this project was completed well before 1970 and released afterwards. So I am justified in giving it a pass on analytical comparison to work actually of this time period. Suffice it to say it is still worthy of the names Tang Chia and Liu Chia-Liang.


HONORABLE MENTION: Essie Lin Chia does a fantastic job in her one on one fight scenes, I was very pleased.

In researching SWORDSWOMEN THREE (1970) I was alerted to some problems viewers had with the narrative. When watching the movie, I also experienced the jolting manner in which the story moved and I attributed this to a lack of smooth transition scenes or segues. When moving the story ahead in time and location, San Kong's characters just appear there without any forewarning. Is it a bad job of editing or did some parts of the story make the cutting room floor because of length -- I don't know. The movie suffers from it though and that's a shame. What we have here is a "mission impossible" style story of suspense with some "interesting" character choices and a real sleazy villain in Lo Lieh's character. Alas, all we can do is bemoan what could have been another Shaw Brothers' classic and encourage casual viewers, if they are to watch this particular movie to watch out for lack of the transitions of plots so the movie will be less jolting. There is no need for collectors to spend money to own this one unless they "gotta have 'em all". See you next time!