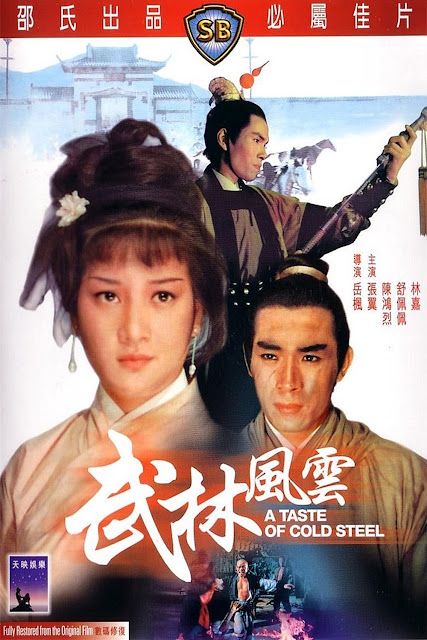 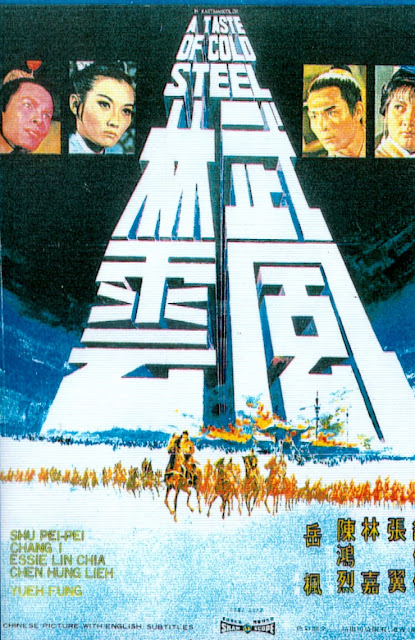 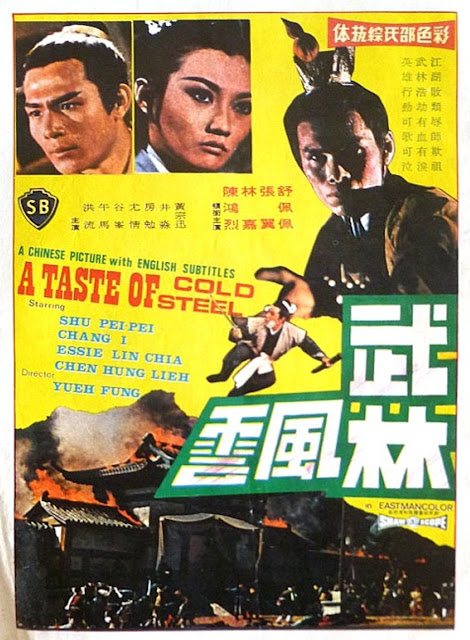 Sir Run Run Shaw produces another film by the team of Director Griffin Yueh Fung and Writer Wang Po I entitled A TASTE OF COLD STEEL (1970). Released September 16th, it seems to borrow a few things from August 5th's Swordswomen Three (1970) while being just marginally a sequel to the team's previous movie Rape Of The Sword (1967) made three years previous to this one. A TASTE OF COLD STEEL (1970) has a more straight forward sword stealing, character driven plot and an updated style to entertain us. The action choreography is done by Simon Chui Yee-Ang which I will get to later on, so --Let's Get Busy!

But before we get busy, I cannot allow the moment to pass before mentioning there are some similarities between these two movies released some weeks apart from each other. That said, the sheer number of times this has happened, even in Hollywood, means that I just get to mention it but not make too much of a fuss about it. It happens, trust me. Now, on with the show! 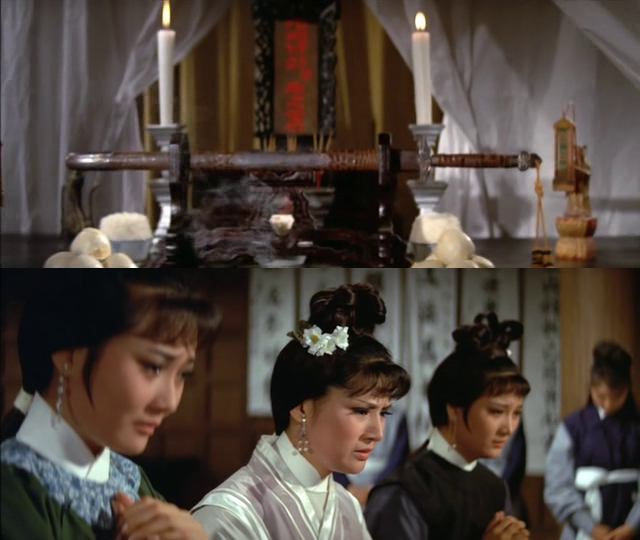 Lord Wu Yi and his step son Prince Lu Tianxia (although in the previous movie the titles are reversed) have conspired to murder Lord Gan Xiong of Fort Gan in order to acquire the Gan Family treasure The Purple Light Sword. While the surviving three daughters of Gan Xiong are still in mourning, Prince Lu Tianxia goes to Fort Gan to pay his respects but then demands the Gan Family "present the sword to the emperor" or risk having the rest of the remaining family being killed. Just as things are getting tense their cousin Hsu Chiu arrives. He had already been on his way to pay his respects but hung back seeing Lu Tianxia and Lu's men and wanting to know what Lu's plan was. A battle ensues and Prince Lu Tianxia is defeated but escapes and goes on the run.

Exhausted and bloodied Prince Lu Tianxia stumbles into an old run down temple in which to rest and unwittingly disturbs the occupants resting within. The Five Tigers decide to beat him up for the offense and because he looks as though he has nothing of value, to kill him. Prince Lu quickly uses his wits to recruit this gang of misfit outlaws to do his bidding and go after the Purple Light Swords, jewels and the three Gan daughters. However the old adage proves true that there is no honor amongst thieves and the Five Tigers and Prince Lu Tianxia form an uneasy alliance with each waiting for the opportunity to get one-up of the other.

The entire cast did a good job but the villains were freaking outstanding! The Five Tigers were genuinely scary and kept the tension up until the end of the movie. I know the movie is over thirty years old but I really hate to ruin the surprise guest star that comes in near the end of the movie so I won't! If you want to know who it is you'll just have to find a way to see the movie but I'm not kidding you. It is worth it if, like me, this the first time you are watching these Shaw Brothers gems from the 60's. Watching these movies in order and not just jumping to the ones I thought would be good proved to be a learning experience for me. I am very glad I did it that way.

FIGHT TIME: Yes, this is the reason I watch these movies! Glad to see that this time there is an action director: Simon Chui Yee-Ang, the actor playing Tiger number three Crippled Tiger. The improvement in the fights scenes from the previous movie are quite noticeable. The women also stood out in their fights and they look like they really took their performance to heart, bravo! I counted eight (8) fight scenes and lots of action in this movie so I had a really good time watching it. No, the techniques are no where near where they will be in just a few short years but I still enjoyed the movie and respect the effort put into the production. My only sore point is the shaky-cam work. It just made it more difficult for me to see what I was looking at and I just don't care for it.

For sequels I look to see if the characters are advanced in their depiction or is the purpose of the plot moved forward. In this case neither is true. We have a very entertaining movie but it is a sequel only because the villains are again used here but they are no more this or that for this story than the last one. Yet, the new villains are better enacted in this sequel and the fights are improved and the movie stands alone in its presentation so you don't need to see the previous movie to enjoy this one. That said, it is an easy nod for me to recommend this movie (as I did the previous one) on the strength of its entertainment value alone, especially if you like creepy villains and surprise guest stars. Maybe not a collectible so much. Thanks for reading, see you next time!