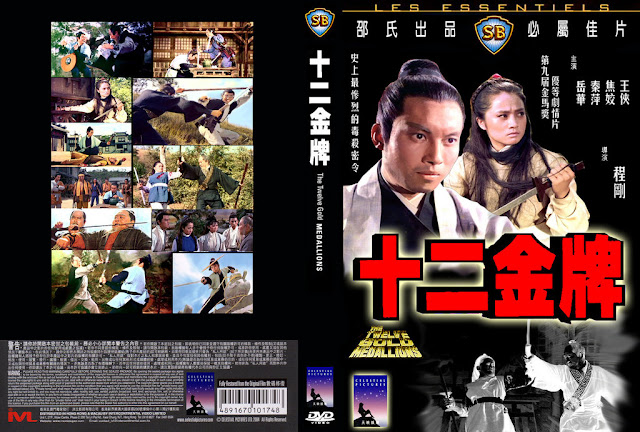 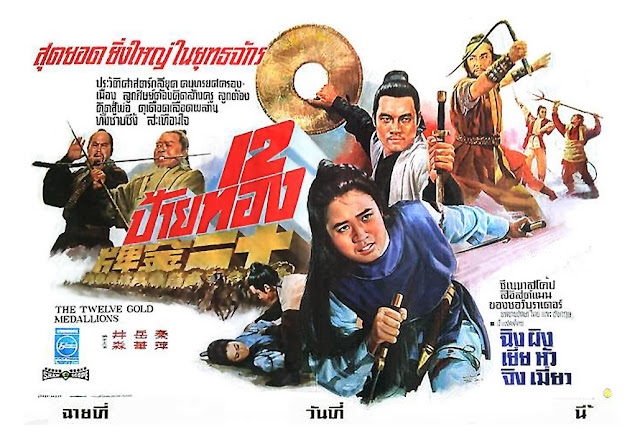 Our first film of seventies is THE TWELVE GOLD MEDALLIONS (1970), released January 7th, and produced by Sir Run Run Shaw. It is a historical-drama, pursuit / wuxia film based on a story by I Kuang and Chen Tien-I. This all-star cast film is also Chin Ping's farewell film being the last film she was featured in. Scripted and directed by Cheng Kang, the action directing credits are Simon Chui Yee-Ang ( as Hsu Erh Niu) and Sammo Hung Kam-Bo (as Chu Yuan Ling). Let's get busy! 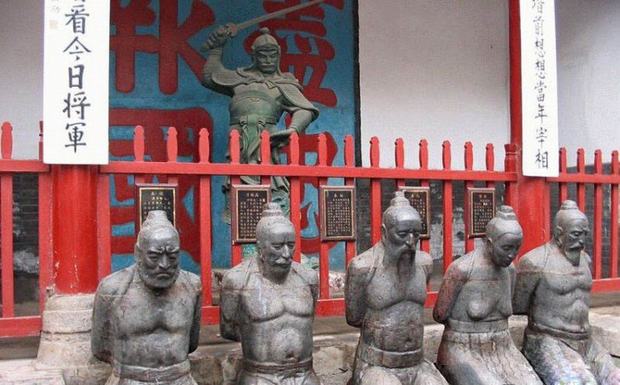 At the root of this film's plot is the history of General Yue Fei : In short, during the Song Dynasty in 1126 A.D., North China was over run by the nomadic Juchen (Jin) and the Song Capital at Kaifeng was taken. General Yue Fei assumed command of the Song forces and after first retreating south he took the offensive and although being greatly outnumbered he forced the Jin to retreat thereby recovering some of the Song's lost territory.

Unfortunately, one Minister Qin Hui formed a peace coalition and influenced the Song Emperor to negotiate peace with the Jin and call General Yue Fei back from his military campaign, halting his progress. Not knowing the precise location of General Yue Fei, Minister Qin Hui sent out the twelve gold medallions with the emperor's seal on it ordering the general to return. Defying the imperial edit was a capital offense. Knowing the loyalty of General Yue Fei some martial patriots attempted to keep the general from receiving the order in the first place. This was also a capital offense but as true patriots they risked their lives to do it.

But Master Miao Lung has also been watching, albeit as a spy on the rooftop. He is discovered by Grand Master Jin but not captured. Master Miao waits for his former teacher by the road that leads to Grand Master Jin's home to confront him. In addition, Grand Master Jin has two daughters whom he must inform of his newly assigned tasks but has little concern how they will react to it. And so begins this heart-wrenching tale of trust, loyalty and  filial piety.

CAST REPORT
THE TWELVE GOLD MEDALLIONS (1970) certainly has an all-star cast:
the good: Yueh Hua as Master Miao Lung, the hero of the story, Chin Ping as Jin Suo, youngest daughter of Grand Master Jin Yan Tang in her last major performance and as can be expected she is at her very best!   We also have Lisa Chiao Chiao as Jin Huan, elder daughter of Grand Master Jin Yan Tang, and Ku Wen-Chung as Grand Master Green Bamboo Cane Meng Dabei,

FIGHT TIME: THE TWELVE GOLD MEDALLIONS (1970) has two fight choreographers and 13 fights (including 3 fights in the grand finale). Simon Chui Yee-Ang and the great Sammo Hung Kam-Bo are the fight choreographers of record ...but still... -- the way I am going to put it is this: either the film editor and or the director obscures the technical aspects of the battles until they are non existent. In this way; it is a disappointment. Put another way: there is plenty of action, plenty of swordplay but no martial arts in this movie. So the question becomes: is it fair of me to expect more in terms of martial arts display in a movie made in 1970? Unfortunately, the answer is yes.

THE TWELVE GOLD MEDALLIONS (1970) is a very important film especially for those that would be students of this genre or of Hong Kong movies in general. History and pop culture have always played heavily in the plots of many of these movies and sometimes without the basic knowledge of the source material it can burden one's enjoyment of the project. I hope I can add some information and encourage others to view and ultimately enjoy these movies as much as I do. So, if you are serious about watching Shaw Brothers or Hong Kong films or if you are a Chin Ping fan then this is a must have; if not you can pass on it. See you next time!