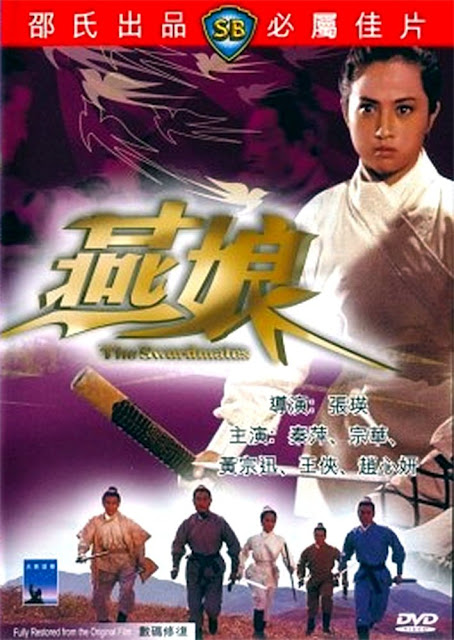 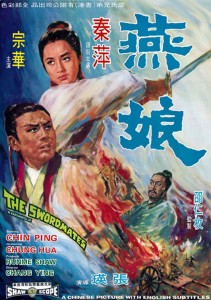 THE SWORDMATES (1969) is a short uncomplicated film that was probably intended as the second film of a double feature. Runme Shaw produced this movie that has two directors (Cheung Ying and Poon Fan) and two Script writers (Poon Fan and Chin Ko) but no action directors. Let's get busy.

There's not much work for me here as the producers have provided a plot summary for the audience on screen but, for the sake of convenience, I will reproduce it here.

"In the dawn of the 15th century during the reign of the Ming Emperor Zheng De, the ambitious King An Hua of Ning Xia province conspired with the neighboring Ai Xin Jue Luo Tribe to overthrow the reign of the Ming. The details of their scheme were hidden in a jade statue of the goddess of mercy: Guan Yin for information transmission.

Governor Lin intercepted the statue en route and commissioned a dexterous swordmate named Yan-Niang to deliver it to the capitol. Panic stricken, the plotters use all their resources in a desperate attempt to recover the statue. It is against this background that our story is set. "

CAST REPORT:
The good : Chin Ping as Li Yan-Niang, for sure, the star of the show, with only one other cast member seeming to be having as much fun as she was. Chung Wah as Chao Ying-Chieh, Huang Chung-Hsin as Li Fei-Lung,
The bad : Wang Hsieh as Wang Tian-Piao, Yeung Chi-Hing as Iron Claws Wang Ying, eating up the screen, having a lot of fun this time around as, once again, the great big bad guy! Chiu Hung as Second Brother, Wang Kuang-Yu as Third Brother, Law Hon as Fat Jin-Gang

FIGHT TIME: THE SWORDMATES (1969) has no action director credited but is action-packed with eight (8) fight scenes by my count. The fights are surprisingly smooth and easy to follow so one of the directors may have martial arts experience. The quality of the fights are state of the art for 1969 which leaves no reason for them to not be enjoyed.


HONORABLE MENTION: Both Chin Ping and Yeung Chi-Hing performed their techniques with the appropriate enthusiasm for maximum enjoyment. Yeah.

For what it is, THE SWORDMATES (1969) is fine entertainment for casual viewers of Shaw Brothers and wuxia movies and may be of interest for people collecting the complete works of Sammo Hung Kam-Bo as he is used at least two different times as two different extras in this film. See you next time!