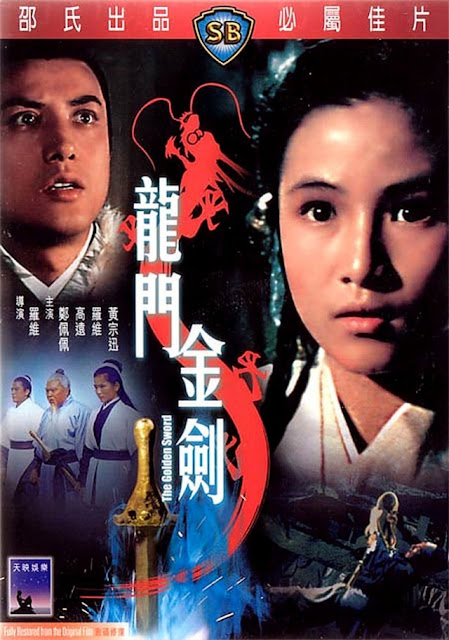 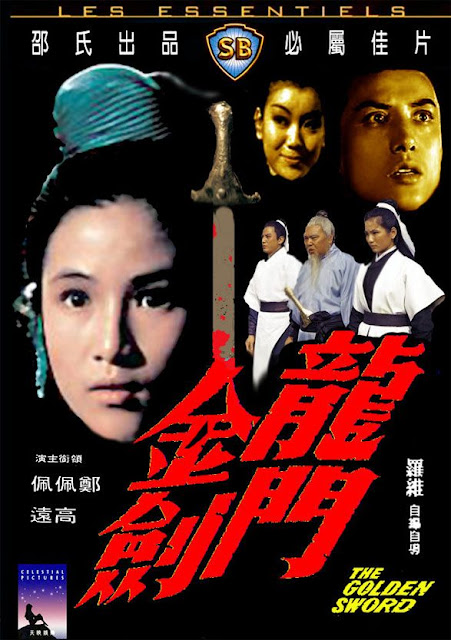 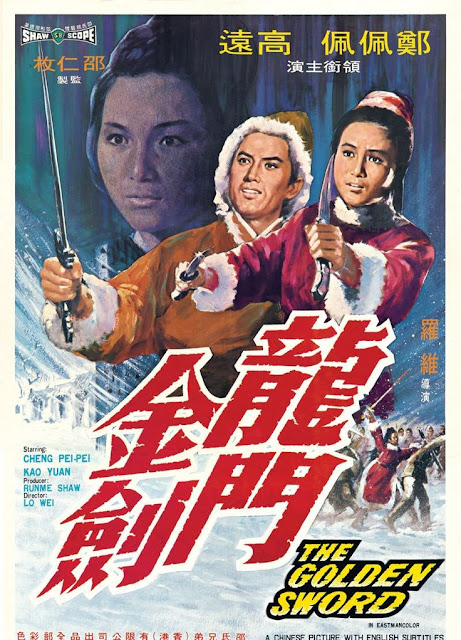 Our next movie in 1969 is also produced by Sir Run Run Shaw. Lo Wei directs and writes the script for the film adaptation of the I Kuang novel THE GOLDEN SWORD. This time Mr. Wei uses action directors Sammo Hung Kam-Bo and Simon Chui Yee-Ang. Let's get busy!

The Chief of Golden Sword Lodge, Eight Arm Dragon Bai Chun-Tun voluntarily rides away from his fortress with two masked horsemen in the middle of the night and goes missing, leaving his man at arms, Uncle Pang at the doorway apparently wondering what is going on. Bai Chun-Tun is also the chief over 36 clans in an Jiang Hu association and it searches for him for seven years before electing a new chief to replace him.

However Bai Yu-Lung, the missing chief's son requests permission to look for his missing father for another three years because he has "a feeling" his father is still alive. His request is granted.

While out in the frontier looking for his father, Bai Yu-Lung meets Ngai Jin-Feng of the Beggar Clan. They form an instant liking of each other which becomes a bond. She becomes his companion as he searches for his father and after the three years are up they get married.

The next morning after their wedding a mysterious box is discovered among the wedding gifts that turns out to contain The Dragon Hall Golden Sword last seen with the missing chief ten years ago. Then, two masked riders that look similar to the two riders that rode off with the missing chief show up again and using kung fu far superior than everyone present take by force Bai Yu-Lung.


Suddenly, Uncle Pang tells everyone he knows what is going on and he directs them inside the fortress to explain to the existence of Dragon Hall Palace and the events of the past ten years. From here everything just gets, well, weird...

HONORABLE MENTION FIRST HALF:
In the first half of the movie we meet The Beggar Clan that raised Jin-Feng and The Three Cripples, of which two are Ku Feng and James Tien. Also Sammo Hung Kam-Bo does a cameo as well as Chin Yuet Sang's cameo as a martial elder that an interesting run after a horse.

Next, in the second half, we have Wang Lai as Lung Xing Zi, Kao Pao-Shu as Seventh Lady, Huang Chung-Hsin as Saintly Swordsman and Alice Au Yin-Ching as Chen Yu-Lan.

FIGHT TIME: THE GOLDEN SWORD (1969) had two action directors, namely Simon Chui Yee-Ang and Sammo Hung Kam-Bo. I counted eight (8) fight scenes in the entire movie and while some of them were quite short they were all quite good, especially the unarmed combat. These unarmed fights were above anything I have seen in all of the movies I have reviewed in the 1960's so far. I was very impressed!


HONORABLE MENTION: The unarmed fights in the second half of the movie far outshone the armed fights of the first half.

As stated when we started the review, THE GOLDEN SWORD (1969) is an adaptation of a novel written by Ni Kuang (I Kuang's pen name) and as such inherits the difficulty of such adaptations. That said, this is hardly a straight forward tale and not being familiar with the original work has us at a disadvantage. The easy part is recommending this as a collectible work, unquestionably one should have this movie as part of any early Shaw Brothers collection. On the other hand I am compelled to recommend this movie for viewers because it is not a bad movie in and of itself but rather, I dare say, perhaps it is just told poorly under all of the above named circumstances. See you next time!