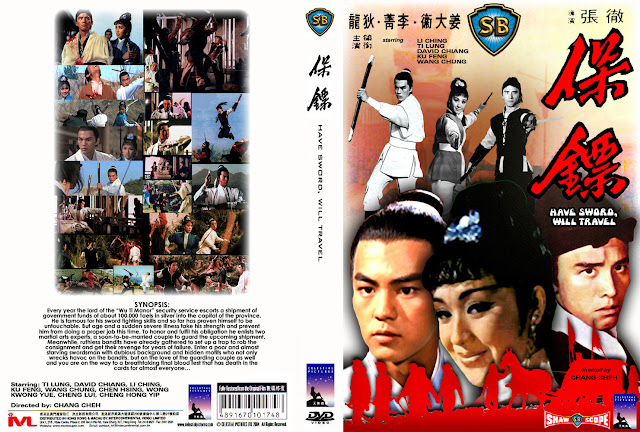 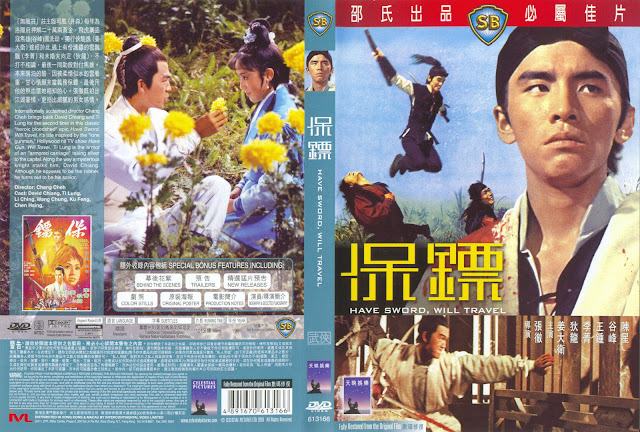 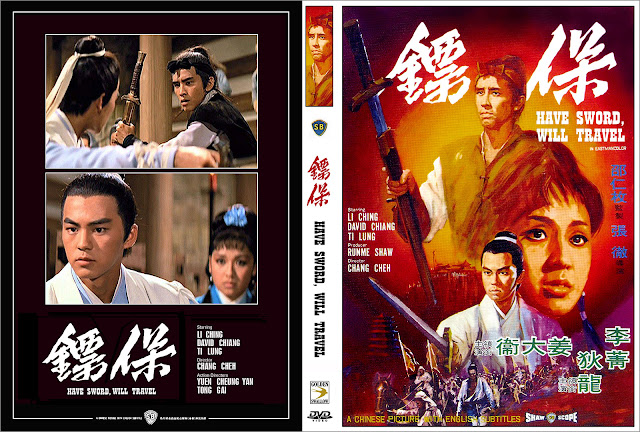 HAVE SWORD, WILL TRAVEL (1969) is an eastern-western / wuxia extravaganza with an all-star cast of the next generation of knight errant stars in the Shaw Brothers stable of extraordinary talent. Produced by the elder brother Runme Shaw, script written by the prolific novelist I Kuang, the action directed by Tang Chia and Yuen Cheung-Yan and directed by the master himself Chang Cheh. Let's get busy!

Swordmaster In Ko-Fong and his security company escorts the government's newly minted silver from Yaman to the capitol every year about 200.000 taels. This year will be particularly dangerous as the government has heard rumors that the Flying Tigers Stockade have plans to rob the next shipment and has stressed Master In accordingly. What the government does not know is Master In has been quite ill and unable to use his kung fu for months. What Master In does know is no matter how ill he is, he has no choice but to escort the silver or be charged with treason.

Knowing he is in dire straits, Master In has sent for Master Yun Chi-Nian, a swordswoman known throughout the Jiang Hu as a master of the sword and flying darts. The problem is his message to her arrived too late as she had already left for the Miao Territories and would be gone for months, much too late for the time the government allotted Master In to begin the transport.

Enter Yin Siang Master Yun's prize disciple and her niece Yun Piau Piau. They received Master In's message but only learn of his dilemma upon arriving at Invincible Village. Once there, Yin Siang decides that they must help Master In and should be able to escort the silver safely.
Lo Yi is a wandering knight errant. A stranger we only know two things about. One thing is, he is down on his luck and out of work. The other thing is he is very skilled in the martial arts. He is hoping to be picked up by one of the many security escort companies in Loyang however, he carries no letter of recommendation from a former employer nor does he claim to be a disciple of a famous master. Yeah, he is going to have a problem.

From this scenario, master storyteller I Kuang lays out a memorable wuxia tale of heroic bloodshed.

CAST REPORT
The good: Cheng Miu as Swordmaster In Ko-Fong (he absolutely nails the feeble, weakness of his dilemma when facing the Flying Tigers), Ti Lung as Yin Siang (comes off justifiably snobbish and entitled and he and David Chiang have great chemistry as rivals), Li Ching as Yun Piau Piau (she plays it reserved and kind and not at all haughty), David Chiang as Lo Yi (a young swordsman that seems angry at himself for being down on his luck).
The bad: Ku Feng as Jiau Hong, Chief of the Flying Tigers (superbly powerful and menacing), Chen Sing as Pestilence, and introducing: Wang Chung as "Mute Buddy"

HONORABLE MENTION: plenty of eye candy here with many extras that will become famous in movies to come such as:  Cliff Lok, Wong Kwong Yue, and Cheng Hong Yip.

FIGHT TIME: HAVE SWORD, WILL TRAVEL (1969) boasts Tang Chia and Yuen Cheung-Yan as action directors. When Chang Cheh directs it is usually the team of Tang Chia and Liu Chia-Liang but this time Yuen Cheung-Yan (brother of Yuen Woo-Ping) steps in and, I cannot front, does a bang up job on this movie. I wish I had some inside info on why this happened, but I don't so this is all I can write on this detail. I counted four (4) fights scenes but it is an over twenty minute action filled finale so I was fine with it.


HONORABLE MENTION: while no one individually stands out in this movie it can be considered the one where the action choreography steps out above everything that has gone on before it ushering in a higher quality of fights in the Shaw Brothers wuxia genre. At least it is so in my humble opinion.

Like THE FASTEST SWORD (1968) one year earlier, HAVE SWORD, WILL TRAVEL (1969) shows the Shaw Brothers' love and willingness to adapt the United States western cinematic themes to their own unique wuxia themed movies to great benefit and I am very excited to see a whole new generation of American people discovering what we loved about these movies growing up thanks to Celestial Pictures through Netflix and Itunes and the like. I wholeheartedly recommend this movie to collectors and movie-goers of all ages! See you next time!