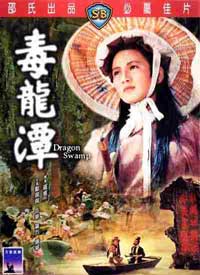 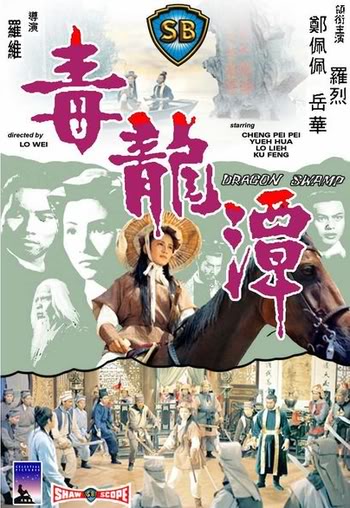 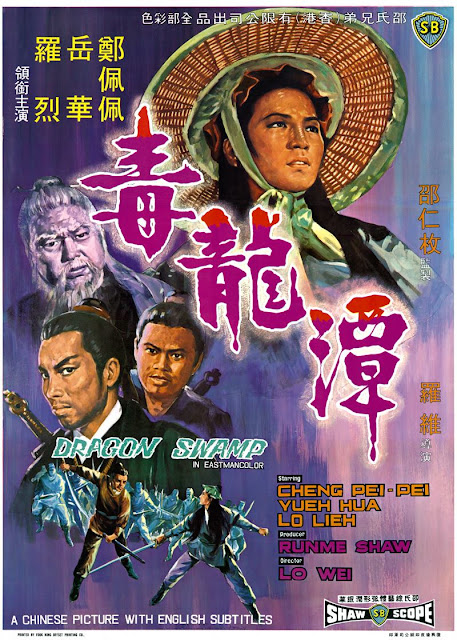 DRAGON SWAMP (1969) is Runme Shaw's production of a fascinating fantasy / wuxia tale from the fertile mind of director and script writer Lo Wei. Using the captivating canvass of the Shaw Brothers beauty Cheng Pei Pei, Lo Wei and make-up artist Fong Yuen add a wonderful dimension to what otherwise had been another "they stole my magic sword" wuxia tale. Let's take a look.

The JADE DRAGON SWORD is a coveted treasured sword from the Shangzhou Dynasty. Unfortunately, after being used to murder an enlightened personage that was a reincarnation of the holy Buddha it became cursed. Whoever attempts to own the sword is possessed with a madness and their family is fated to be broken. The sword came to be trusted to the Taoist Lingshan Chunyang Monastery.

Under the current abbot, Master Fan Chung Yun, the Jade Dragon Sword was stolen by Tang Dachuan the White-Faced General. Tang Dachuan seduced Master Fan's student Fan Ying, a 17-year-old impressionable young girl who betrayed everyone and everything she knew for the "love and kindness" of the sweet-talking devil. Three years and two children later (not to mention a certain Jade Dragon Sword) the two lovers hiding place is discovered by Master Fan. Tang Dachuan escapes with the older child and leaves behind Fan Ying and the younger child. Master Fan recovers the Jade Dragon Sword and punishes Fan Ying to a twenty year banishment in the Dragon Swamp but he takes the youngest child with him to raise in his monastery.

20 years later, a grown up Qing Erh practices the 8 diagram steps at the Jingang Pagoda unaware that she is being observed but when it is discovered that the Jade Dragon Sword has once again been stolen Qing Erh suspects that she is the one responsible for the thief's ability to walk the correct steps to get the sword. She sneaks out of the monastery determined to reclaim the sword for her teacher and ask for his forgiveness. It is not the sword, however, but her face that sets up the incidents that become a fascinating adventure for the young girl and for us.

DRAGON SWAMP (1969) has an all-star cast but Cheng Pei Pei owns this movie with a duel performance as Fan Ying and her daughter Qing Erh. I have no idea why this movie is not every bit the classic as Come Drink With Me (1966). She nails both roles very convincingly. Director and scriptwriter Lo Wei plays the big good Master Fan Chung Yu and Huang Chung-Hsin plays the big bad Tang Dachuan the white-faced general. Yueh Hua is Roaming Knight Xi Zheng Yuan and Lo Lieh is Head of Security Yu Chiang.
HONORABLE MENTION: Sammo Hung Kam-Bo rises from extra to bit part as "gambler at Chiang's party".

FIGHT TIME: Sorry, but I found no one credited with the action direction for this film. Although both Lee Siu-Pang and Han Ying-Chieh, (both capable action directors at the time), are in this film neither one is credited anywhere as action directors for this movie. That said, I counted are six (6) full fight scenes and I have learned that that's plenty of action for this time period. The scenes are also pretty well done but I have notice the debut of the concentric circles clock-counter-clock stuntman-go-round that the extras do while waiting for their turn to die in fight scenes and I can't help but smile.


HONORABLE MENTION: As I mentioned before, Sammo Hung Kam-Bo rises from stuntman extra to bit part as "gambler at Chiang's party".

As I said before,  I have no idea why this movie is not more well known. As famous as Cheng Pei Pei is, DRAGON SWAMP (1969) is a tour de force of Cheng Pei Pei's acting skills as we see her in her 20's 40's and looking like she is in her 60's.   Fong Yuen absolutely deserves another mention as the make-up artist and Lo Wei has indeed whipped up another fascinating story but it is Cheng Pei Pei's acting skills that sell her characters in all their different stages. Bravo to Cheng Pei Pei for giving the Shaw Brothers another classic film that is also epic. Yes, by all means, see it, buy it, borrow it but sorry, no stealing.

When people summarily dismiss martial art movies from the 1960's, I understand. The level of personal skills that Bruce Lee brought to the movie world raised the bar for every single movie industry in existence. Yet, if you discard our history like that, what of movies like this? We are not better off for not having seen this movie. I am glad however to witness a movement to not only own these classics but to watch them as well. I am also humbled to be able to do my part by blogging these reviews. Good or bad, like or not, let's keep watching. See you next time.