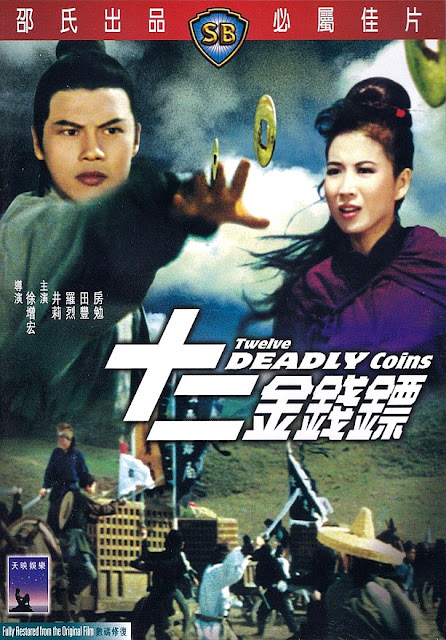 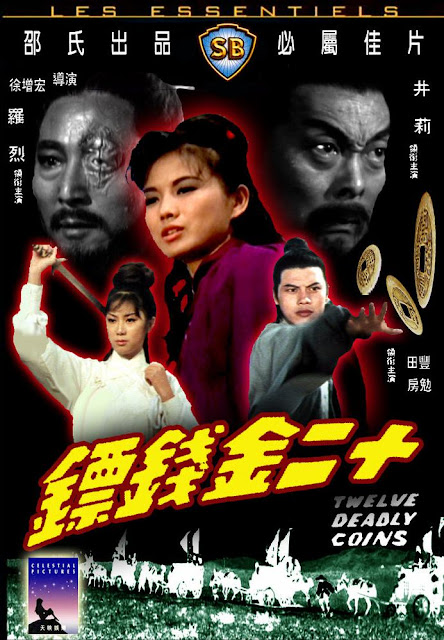 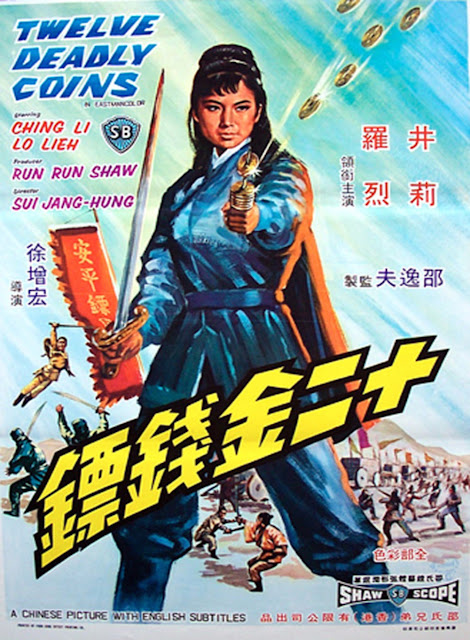 Our next movie for 1969 is an adaptation of the novel TWELVE DEADLY COINS written by Chang Meng-Huan. I have no access to this novel at all so there will be no comparison data. Runme Shaw is the producer, Hsu Tseng-Hung is the script writer and director. The action team of Tong Gai and Liu Chia-Liang are back after a spell to action direct this wuxia tale of brotherhood and chivalry also titled TWELVE DEADLY COINS (1969). Let's get busy!

Yuan Cheng Lieh has practiced and planned for twenty years for his revenge. His "iron thorn technique" is finally ready to challenge the mighty Yu Jian Ping and his famous "Twelve Deadly Coins". The hurt and pain of rejection and the physical injury to his left eye will finally be avenged. But first, Yu Jian Ping must be made to suffer a humiliation that will have him begging for death. Yuan Cheng Lieh has sworn however, that he will not let Yu Jian Ping die so easily.

Qiao Mao was born poor and raised by his father until Master Yu Jian Ping of the highly respected Yu Security and Escort Bureau took him in and taught him martial arts and treated him almost like a son. In fact, Master Yu taught Qiao Mao so unselfishly that Qiao Mao's martial skills were second only to Master Yu's himself. Never the less, not only did Qiao Mao never forget his humble beginnings he also never dared think of himself as the equal of any of Master Yu's many pupils and certainly not the master's own son Yu Hua. He has allowed his humble birth to burden him like a stone he is obligated to carry on his shoulders until his death.

Yu Jian Ping's Security Escort Bureau has been hired to escort the Jiang Ning County Soldier's Fund of 200,000 taels. Master Yu has assigned this to his son Yu Hua thinking this would be an excellent opportunity for his son to get some experience. Qiao Mao, however disagrees citing the exceedly large amount of funds involved. Both Master Yu and Yu Hua think that the bureau's reputation should be deterrent enough to make even this amount of money a milk run. But Qiao Mao does not agree and after failing to convince Master Yu to send him along he trails the escort wagons on his own and notices them being shadowed by some men dressed in black on horseback.

Qiao Mao rides up to Yu Hua and warns him of the apparent dangers but Yu Hua is having none of it. Yu Hua agrues with Qiao Mao and refuses to alter his planned route. As you can imagine, things do not go well for the convoy and that is just the beginning...

TWELVE DEADLY COINS (1969) stars Lo Lieh and Ching Li in one of those wuxia tales where the young hero is so embedded in honor and integrity that he is almost totally "bitchafied" and the young heroine is so stepped and surrounded by an evil and vile environment that she falls in love with this bit-- ah, I mean, hero at first sight. Lo Lieh plays Qiao Mao the perfect student of Master Yu Jian Ping played masterfully by the great Tien Feng. Ching Li meanwhile plays the ungrateful and treacherous student to the dastardly Master Yuan Cheng Lieh who is the villain of our piece also masterfully played by the great Fang Mian [These fine gentlemen would also play opposing masters in the cult classic FIVE FINGERS OF DEATH (1972)].

FIGHT TIME: The action-directing team of Liu Chia-Liang and Tong Gai are back for TWELVE DEADLY COINS (1969) but there is not a lot to direct here. There are only two (2) full out fight scenes in the movie, the robbery of the convoy and the multi-fight finale. In spite of this they give their usual high standard of action although I couldn't help noticing that there was a lot of light skill on display in this movie. I must say I wish there was more fighting but that is my only complaint about the fighting.

It took me three times around watching TWELVE DEADLY COINS (1969) before I recognized the themes from William Shakespeare's Romeo and Juliet embedded in the plot. This is always going to work in a love story if done properly so when I do my pros and cons columns, I get pros: Liu Chia-Liang action, wuxia storyline, end of movie twists, Ching Li, Ching Li and Ching Li. The cons: I wish there was more fighting, and the hero is too soft for my personal taste. So over-all I will give TWELVE DEADLY COINS (1969) a positive recommendation and encourage you all to watch it if you can but to buy it only if you collect. See you next time!