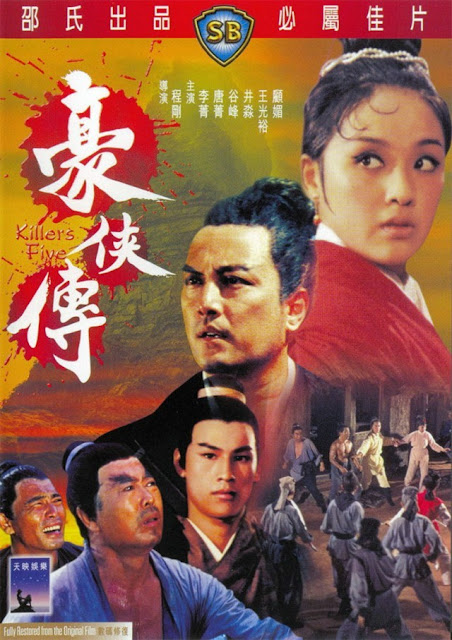 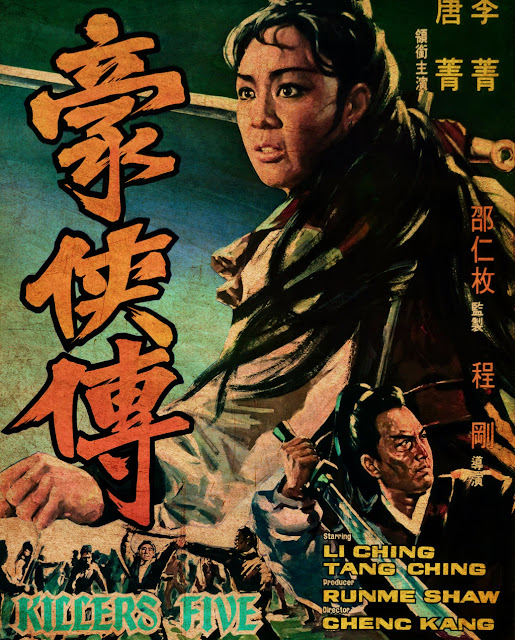 Our second movie for 1969 is KILLERS FIVE (1969) an ensemble cast "mission impossible movie" directed by Cheng Kang and co-scripted by Cheng Kang and Sung Hoi-Leng. Han Ying-Chieh is credited with being the action director and Runme Shaw is the producer that brings it all together. Let's get busy!

Cao Qinsheng, the daughter of Duke of Ping Xi, Cao Guowei, who is just recently engaged to the Prince of Jin, makes a miscalculation and goes to town without her escorts to visit her nanny. This misstep gives the villainous Jin Tianlong the opportunity to kidnap Qinsheng and hold her for one hundred thousand taels of gold in his fortress on Mount Jinlong. The Duke is given a ten day deadline to pay the ransom --or else!

The Duke of Ping Xi, Cao Guowei decides against using troops to storm Jin Tianlong's fortress in Mount Jinlong to rescue his daughter. He sends a letter to summon Yue Zhenbei, the son of an old friend to rendezvous at a discreet location and arrange a surgical strike to free his daughter hoping to avoid a possible war with the nation of Jin should the Prince of Jin find out his future wife has been so poorly protected as to have been kidnapped.

Yue Zhangbei has accepted Duke Cao Guowei's request to rescue his daughter. Zhangbei's plan is to recruit the Water Rat: Li Xiaoqi, the Climbing Tiger: Niu and the Master Archer: Ma to go in, secret the lady out and get her back to the duke even if he has to sacrifice himself in the process. Along the way they meet the King of Burglary Liang Shangfei who is willing to help --for a price! Killers Five (1969) has some small twists and turns on its perilous journey making it a film well worth your time.

Li Ching, Li Ching, Li Ching, Li Ching, I adore me some Li Ching. Ever since I saw her performance in RAPE OF THE SWORD (1967) whenever I see her do her super to-hip-for-the-room characterization I am so entertained! Her performance here in KILLER FIVE (1969) does not disappoint. Li Ching plays the Master Archer Ma Jin Ling [I got so excited I almost forgot to write this (lol)]. Tang Ching plays the "crew chief" Yue Zhengbei and does a movie standard performance. Ku Feng as The Water Rat and Cheng Miu as Climbing Tiger have a playful chemistry as "bro-friends" that is cool to watch. Wang Kuang-Yu is the villainous Liang Shengfei and Yeung Chi-Hing plays Duke Cao Guowei and his daughter is played by Carrie Ku Mei.


HONORABLE MENTION: Wang Kuang-Yu is the "Five" of the KILLERS FIVE, King of Burglary Liang Shangfei.

One of my pet peeves is the overuse of the word "classic". With or without a hashtag the word "classic" is often used as a comment with it being the only word present. While the word does not suit my personal taste because of its overuse, Killers Five (1969) being one of the earlier mission movies (if not the precursor for them) is certainly a classic and is a perfect lesson on how to do it well. I, 100% without reservation, recommend KILLERS FIVE (1969) for all viewers and collectors to enjoy --with or without popcorn! See you next time.