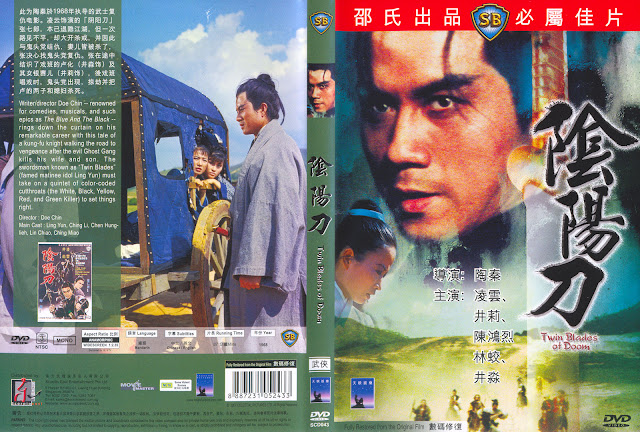 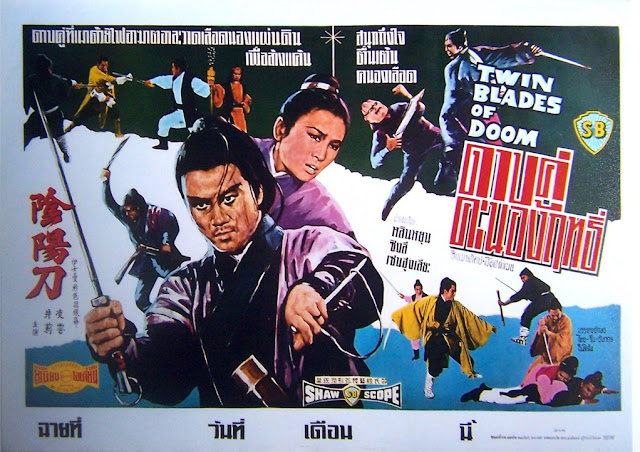 Runme Shaw produces a good straight forward wuxia yarn with TWIN BLADES OF DOOM (1969), our first film of 1969. There are no problems whatsoever with director Doe Ching's  work and as a matter of fact his direction is very much above par. However, there is a flaw in the script from writer Chiu Kang-Chien. Lets take a look.

Our story begins with Chang Qi Liang also known as the TWIN SWORDS OF DOOM and Hero Lu Chun Yee also known as the Jade Unicorn on a field amongst a mountain range for a duel. The are both reading letters presumably written by each of them for the other and afterwards gentlemanly and honorably begin the duel. Chang Qi Liang defeats Hero Lu with his unique weapon but is immediately overcome with grief over his win and retires from the Jiang Hu and refuses to kill for three years.

SPOILER ALERT: Now, if you have read my previous 30 reviews you know I like to write spoiler-free reviews, if I can do such a thing for such old movies but in this case there are two things that are NEVER revealed in this movie and I would rather mention them, than not, so it does not diminish one's enjoyment of this movie. One is: what was in the letter the heroes wrote to each other and the other is why Chang Qi Liang is devastated over his killing of Hero Lu. The additional factor of not speaking Mandarin Chinese means that something more could have been revealed that was not translated in the subtitles but there's nothing we can do about that as the movie is rare enough as it is, only available in VCD, if you can find it at all. So with a movie released in 1969 we just have to live with the fault in the movie and carry on. It happens sometimes. Aside from these two things the movie is very straight forward and I liked it very much as you will see.

It is three years later and Chang Qi Liang is struggling and living with his parents taking on odd jobs to help make ends meet. It just so happens that the house where he and his parents live is part of the territory of The Ghost Gang. The Ghost Gang is a huge underworld criminal organization engaged in all kinds of criminal activity. The leader is called the Ghost King, and his lieutenants are known as The Five Great Killers, namely: Red Killer, Yellow Killer, Green Killer, White Killer and Black Killer. The Ghost Gang employs scores of down and out citizens across China in their operations and supply weapons and masks to their henchmen.

Qi Liang's latest odd job is as a paladin carrier. Unfortunately for Qi Liang, the passenger happens to be  the provincial governor of Han Dan whom the Ghost Gang has decided to rob and assassinate this rainy night. Unfortunately for the Ghost Gang, when they decide to kill all possible witnesses Qi Liang goes on automatic kill mode and wipes out the entire kill crew. Unfortunately for Qi Liang (okay, last one, I promise) the Yellow Killer is the cleaner for this job and sees his kill crew accomplish the job but get wiped out and so he tracks Qi Liang to his parent's house and kills both of his parents.

The Yellow Killer's next move is an elaborate ambush on Qi Liang while Qi Liang is looking for his parent's killers and the Ghost King. The battle between them leaves Qi Liang wounded as well as poisoned. His weakened body is found by a troupe of martial arts performers and the girl who finds his body, Lu Yin-er, takes an immediate interest in him. Yin-er and her father treat Qi Liang for the poisoned wound and when he recovers they give him a ride to Qi Dou Town (He is still looking for the leader of the Ghost Gang) while they go on to Lu He Village to perform.

TWIN BLADES OF DOOM (1969) stars Ling Yun as the troubled and vengeful son Chang Qi Liang, he is a handsome actor and goes on to do many a great wuxia movies for Shaw Brothers. Ching Li plays Lu Yin-er, with her cute self and is so girly and adorable you can barely resist her. Her real life father, Cheng Miu, plays her father in this movie, if you noticed the resemblance and she becomes a major beauty in the Shaw Brothers stable of beautiful women. Chen Hung-Lieh plays Ma Lok and Yau Ching plays the mayor of Qi Dou Town's wife and their parts are probably better appreciated if you can speak Mandarin.
HONORABLE MENTION: Lam Kau as the Ghost King, Chieh Yuen as Yellow Killer, Cheng Lui as White Killer and Lau Gong as Black Killer

FIGHT TIME: TWIN BLADES OF DOOM (1969) has no action director in spite having seven (7) full fight scenes by my count for an action packed movie with some pleasant subplots that might even cause you a laugh or two. Everyone performed well so we have no "HONORABLE MENTION" for this review.

I would not at all be surprised if TWIN BLADES OF DOOM (1969) was somehow an adaptation of some form of Chinese literature. The story seems very involved and cut short in some places giving an overall feeling of being scaled down. In spite of this, the movie as a whole still thoroughly entertains, even without a fight choreographer and I absolutely recommend it for all viewers and collectors alike! See you next time.

If you liked this review please comment on the blog, become a follower of the blog, join me on my Facebook account by sending me a message first and then a friend request so I know who I am friending (  https://www.facebook.com/Michael529P  ) and like my Facebook page: SHAW Brothers Kung Fu Movies 1965-1986. I thank you and would appreciate it very much!