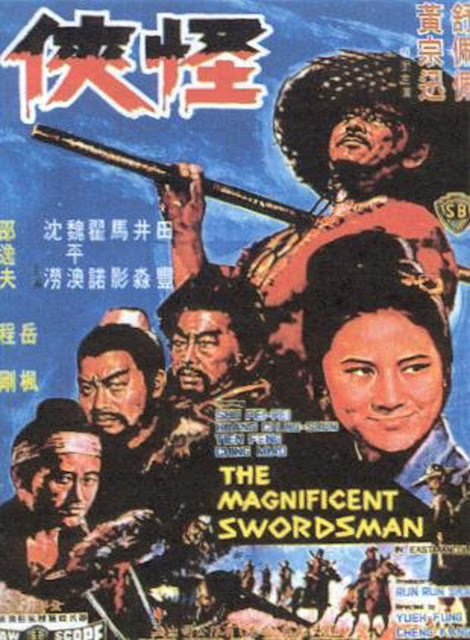 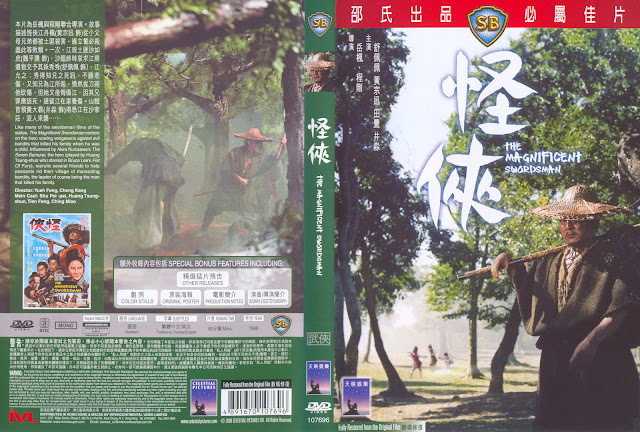 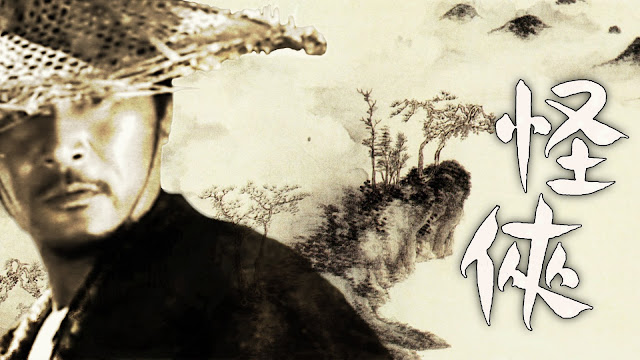 Sir Run Run Shaw produces our next movie: THE MAGNIFICENT SWORDSMAN (1968) directed by both Griffin Yueh Feng and Cheng Kang, with the script written by Ko Jui-Fen. I have read of Sir Run Run Shaw great admiration of Japanese movies and this seems to be his homage to them. A derivative product does not in and of itself make a bad movie but can they pull it off? Let's see.

Jiang Dan Feng is a wanderer known as The Magnificent Swordsman. As he is traveling he is set upon by a pair of bandits whom he dispatches in very quick fashion. However, one of the bandits gives Jiang Dan Feng a dying request to bring his sword to his sister in the nearby Sha Village. A small village that is under siege by the group of bandits these two would-be killers belonged to. Arriving at the village he is held responsible for killing one of the villagers own because, as it turns out, the owner of the sword was just a consort of the bandits but not yet a "full member", if you will. At odds with both the villagers and the bandits he feels obligated to the young sister who is now alone in the world without her brother and decides he will protect her even at the cost of his own life.

The casting of Huang Chung-Hsin as the lead hero was interesting as hell and I was not at all thinking in favor of it before I experienced the whole movie than after I saw it all the way through. The ebb and flow of the villagers attitude towards the stranger (mostly ebb) was totally in sync with the character portrayal of Huang Chung-Hsin and it helped me accept the movie as it was. Also great casting was Shu Pei-Pei in juxtaposition to Mr. Huang's character with so little sexual tension (read as none what-so-ever) between them that when the impropriety of their company was mentioned, it came off as ridiculous as we were supposed to think it was, which in turn held us at arm's length from the villagers who were not as upright in their thinking as they thought they were. The casting and acting in THE MAGNIFICENT SWORDSMAN (1968) was not its sore point, on the contrary it was quite good.
HONORABLE MENTION: Tien Feng, Wei Pin-Ao and Cheng Miu

FIGHT TIME: Well, with such a title as THE MAGNIFICENT SWORDSMAN (1968) the stakes for there being "magnificent" sword fights were pretty high, unfortunately, it was just not to be. I counted five (5) fight scenes including the finale. This is the bare minimum fight count but I assure you THE MAGNIFICENT SWORDSMAN (1968) is not a boring story. The red herring at the very beginning kept us in suspense long enough for the real plot to be set up. Also while there was no one credited for the fight choreography, when I could actually see the techniques they were not bad at all. In fact, a couple or few of the fight scenes were actually quite slick -- especially in the finale, so let me get to what I feel were the two basic fails of the fight scenes that could have been.

Number one, the shaky or hand held cam scenes were a total fail. Maybe I am bias but I don't get it. I know it is a motion picture but the picture does not have to move. I am just not into a blurry images. Number two: the film editing of the fight scenes was way off. The swordsman would go into a stroke  our eyes would follow the sword but the camera would swing in a random direction and just end up somewhere other than where logic would have you anticipate the technique going, leaving you wondering what you just missed. There was also one other basic fail but it had nothing to do with the fight scenes so I will not put it here with he fight analysis.

I mentioned at the beginning of this review that "a derivative product is not necessarily an automatic fail" and now I am going to add the "but". But there must be that *uhh* (imagine James Brown uttering it) that makes you feel good after watching it. Something, usually something different about it, that makes you say to a friend, "hey, you have to go see this movie!" Unfortunately, THE MAGNIFICENT SWORDSMAN (1968) doesn't have that *uhh* to help it stand out from the Japanese movies it is obviously paying homage to. The fault could lie in that it is not a remake of any one Japanese samurai movie but a homage to all of them and (in my opinion) needed an extreme expression so that it could also stand on its own and be appreciated.

The violence was not violent enough, the good guys were not good enough and yes, the bad guys were not bad enough. If even any one of the three were extreme then that would have done it. Instead the whole place and all of its people just seemed to be down on their luck temporarily, and we have all been there. Oh, well and then, we move on. Even further unfortunately if you miss this movie, then any other Japanese classic samurai movie will do at least as well if not much better and so why watch this one? So, I am not going to recommend this movie except for extreme "completist" (collectors that must have every single item). Sorry, but it just be that way sometimes. Every single Shaw Brothers movie will not end up being a classic. Sad, but true. Let me wish you all a HAPPY NEW YEAR 2016 (year of the monkey) and for now, see you next time! 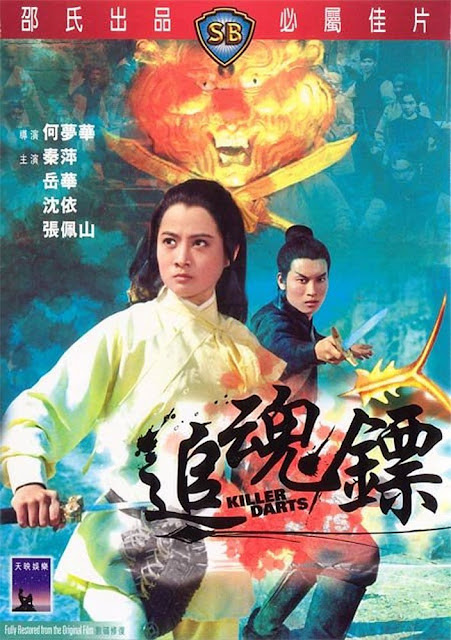