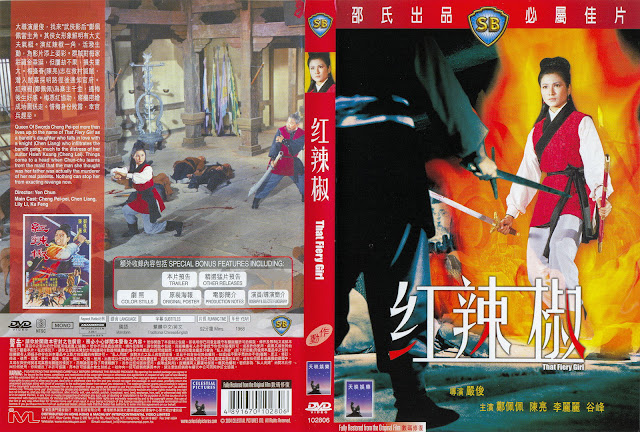 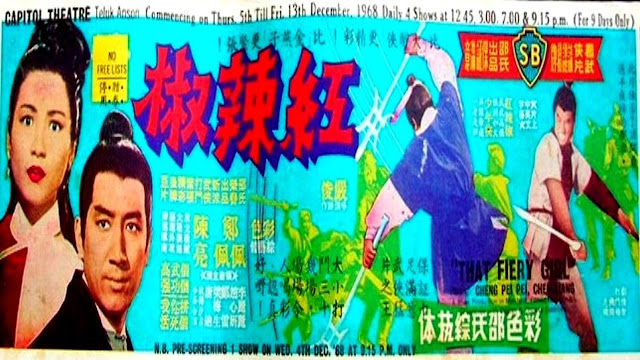 THAT FIERY GIRL (1968) is a romantic / drama / wuxia tale of opposing clans. Not quite Romeo and Juliet but not far off. Yan Jun is the director and Liang Jen is the script writer and this is Mr. Liang's very first script. Runme Shaw is the producer this time around. We should remember Yan Jun as the director of THAT MAN IN CHANG-AN (1967) that I declared was a wuxia / comedy that kept me laughing, I hoped, intentionally. So, as you can imagine, I am really looking forward to watching this one. Let's check out the plot.

Unfortunately the map had been long ago stolen so the Hulu Clan raiders burned down the ancestral shrine.  Mei Feng-Chun and his two friends camp out to plan their next move but coincidentally it is the meeting place of the Mei Clan traitor, Mei Danui who stole the treasure map and his Hulu Clan co-conspirator. After hearing the arrangement Mei Danui made for assylum at the Hulu stronghold Mei Fengchun kills Mei Danui and steals his identity to infiltrate The Hulu Clan and recover the Mei clan treasure map and get revenge for the deaths caused by the Hulu clan. His first obstacle: the Hulu Clan's fierce warrior woman Pearl, also know as Red Chili.

Chan Leung debuts as Mei Feng-Chun / Mei Denui and has that "cop smell" all over him. Chan Leung just looks, acts, moves and radiates "good guy" and THAT FIERY GIRL (1968) totally benefits for it. On top of all of that, it doesn't hurt that this is his very first job and it carries over in his performance in the enemy's camp, unsure whether or not at any moment he could be unmasked as a traitor he never comes across as relaxed. On the other hand you have the veteran actress Cheng Pei-Pei as Pearl / Red Chili, who delivers the exact character required here: an immensely confident daddy's girl superbly trained in the martial arts vaguely aware of the evil around her but not consumed by it.

Pearl is immediately draw to the aura of goodness in Mei Denui and becomes his protector. Their chemistry is one of big sister / little brother and evolves into a young woman's first crush as his character compared to the other Hulu men is one of personal pride versus the Hulu men's creepy selfishness. A very easy choice for her to make and THAT FIERY GIRL (1968) is very much more a romantic drama with a Romeo and Juliet twist than a wuxia revenge tale but it combines both elements and works well as very good entertainment.

FIGHT TIME: THAT FIERY GIRL (1968) is not much on fights. There is no one credited for fight choreography and I counted only 2 or 3 fights with some small skirmishes here and there. This film is saved by the Romeo and Juilet theme of the story and the actors so thankfully there is no reason to be disappointed too much.

I recommend THAT FIERY GIRL (1968) as a pleasant way to past the time for viewers and collectors and it certainly doesn't hurt to see Cheng Pei-Pei act as a different character than her performance in COME DRINIK WITH ME (1966). She is very convincing as a cute daddy's girl. See you next time! 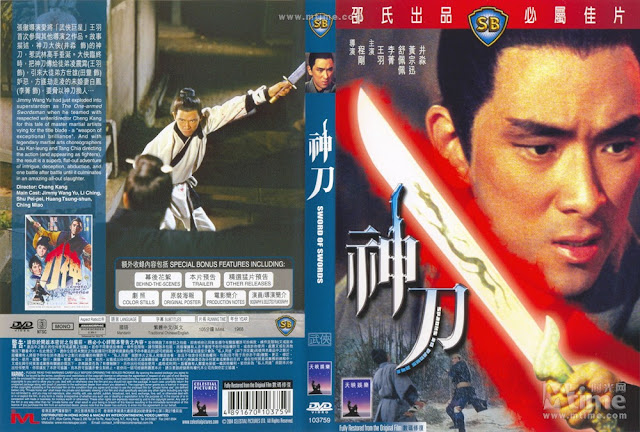