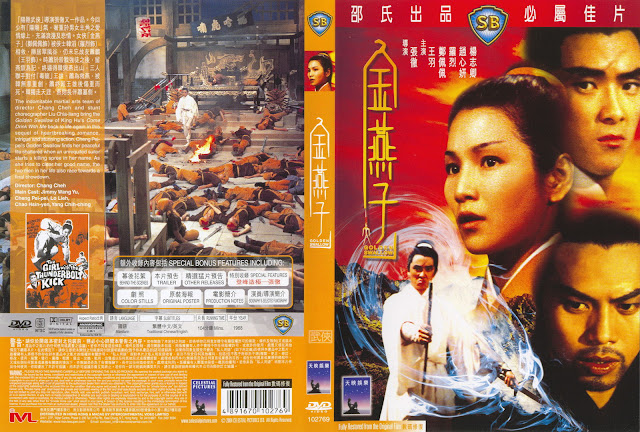 GOLDEN SWALLOW (1968) is the sequel to King Hu's  masterpiece COME DRINK WITH ME (1966) by virtue of the lead character of COME DRINK WITH ME being the love interest and being played by the same actress, the lovely Cheng Pei-pei. However the character Golden Swallow is not the main character of the movie bearing her name. That honor goes to Silver Roc played by the very talented Jimmy Wang Yu. The co-writer and director of the sequel this time is Chang Cheh  (spelled here Chang Cheuh). The action scenes are arranged by a new team as well: Tang Chia and Liu Chia-liang.

Since the events in COME DRINK WITH ME, Golden Swallow has become somewhat of a savior to the downtrodden people of an unnamed village and is quite charitable. Her enemies lay in wait for her expecting her to help a lady with children in dire need. She does indeed show up and leaves money for the needy family. Her enemies use this time to attack her with poison darts and, after striking her with one, move in for the kill. However just in time a friend of hers, Golden Whip steps in and cripples all of her attackers and threatens to kill them if they do not give him the antidote to the poison. He brings her back to his home at a remote valley to recover and during that time they develop a strong bond.

Next we see Silver Roc traveling on horseback on a seemly remote road along some mountains. Above him some warriors are setting up an ambush for him to do nothing but kill him. After wiping them out in grand style he comes atop a mountain and looks down and sees Golden Swallow, Golden Whip and his friend Flying Fox sitting around rather friendly like. He ponders the situation a second and then pulls out one of her golden swallow darts with an idea clearly on his face. Silver Roc decides to mass murder despicable villains and leave her dart behind implicating her as the murderer! Cue up Tina Turner's  "What's Love Got To Do With It?"

Jimmy Wang Yu as Silver Roc Xiao Pang is as twisted a hero as you will ever find, but you know what? When they come for him we root for him from the bottom of our hearts!
Cheng Pei-pei's portrayal of Golden Swallow Xie Ru Yan is very good once again but this time she plays her character very much as a girl and not the rugged military trained fighter tomboy from her previous movie. This time she is not the governor's special envoy but another female fighter wandering the jiang hu and fighting for justice. Lo Lieh as Golden Whip Han Tao also opts for a softer interpretation of the characters that he usually plays and he has a quirk against killing but maiming for life is okay (?). Wu Ma plays Golden Whip's old classmate Flying Fox Hu Zhen and Yeung Chi-Hing is the big bad villain that shows up after the movie is half over once again. Future Star Gazing: seen in this movie are: Ku Feng, Liu Chia-Liang, Liu Chia-Yung, and a scruffy David Chaing.

Fight time, yeah!! So, I count six fight scenes in GOLDEN SWALLOW which, from my judgment, is a good amount leaving very little chance for boredom here. This is the first movie I am reviewing with the team of Tang Chia and Liu Chia-liang (although it may not be their earliest work together) and the first difference I noticed, from the other four films I have reviewed, is the change of focus from "one on one fights" to "one versus many opponents battles". This makes the overall look of the fights are not as tight as the other fights I have seen. Basically the difference is in the techniques which have gone "from point and line" to "point and circle". The techniques the fighters are using (with the interesting exception of Golden Swallow's techniques) swing about in an arc whether they hit or miss their intended targets. This method allows for as many as four opponents to be felled with one strike. In addition to the arcing techniques, the camera is often so close to the action as to obscure the details of the fight, which, to be brutally honest, I do not like. What is worth the price of the admission is the sheer number of people Silver Roc manages to kill, it is absolutely incredible! As for Golden Swallow's techniques they are still mostly one to one techniques but are more girlish and now instead of keeping her twin daggers stealthy in her boots she wears both of them on her belt.

In conclusion, GOLDEN SWALLOW (1968) could have easily been named: WHAT HAPPENS WHEN A PATHOLOGICAL SERIAL KILLER HAS A CRUSH ON YOU. Kudos to co-writers Chang Cheh and tu Yun Chih on the screenplay. What a sad, twisted hero Silver Roc is but a master-swordsman of the highest caliber.The movie is definitely a must see mostly because of the plot but please, bring a strong stomach. 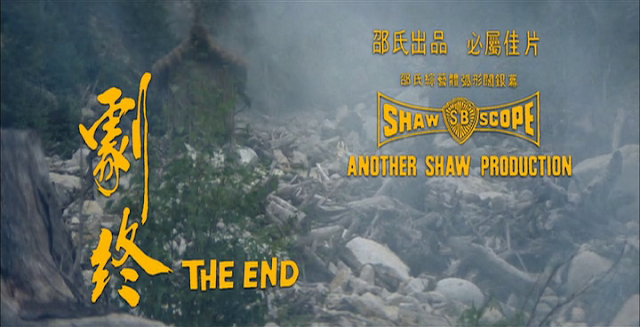