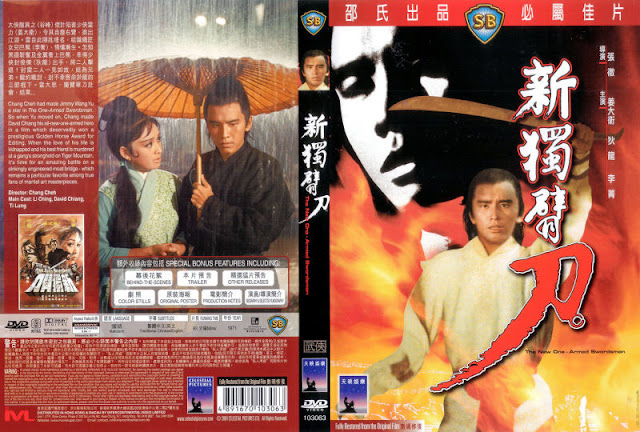 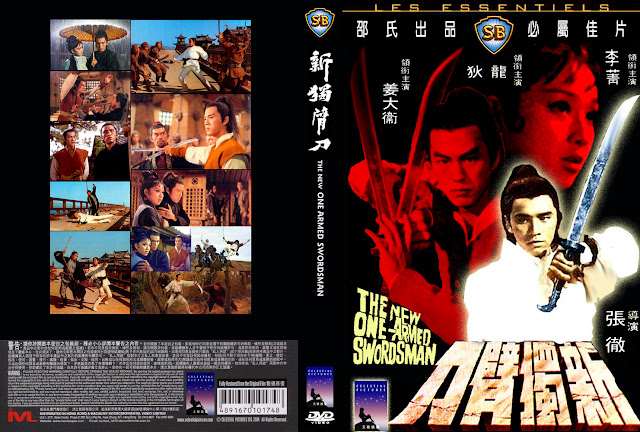 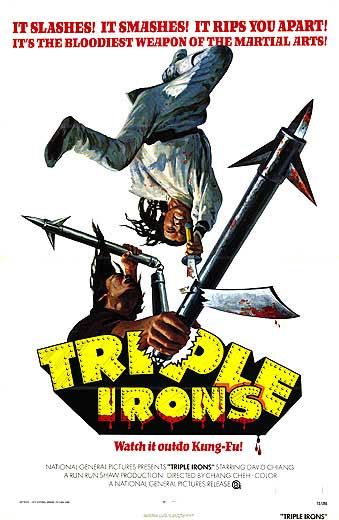 Shaw Brothers Studios' history speaks for itself. It successes in the film industry are legend and it's one of the few movie companies that can get you sick and tired of hearing someone say the word "classic" after hearing the title of a movie produced by that very studio. But still (I always wanted to say that!) they were not perfect in every decision and, so --a lack of belief and insufficient monetary reward caused them to lose one of their biggest stars after 1970. In 1971 Shaw Brothers decided to re-launch one of their biggest hits without its original star.

"The king is dead, all hail the king!" Jimmy Wang Yu is gone and producer Runme Shaw has a new sheriff in town and his name is David Chiang in the form of THE NEW ONE-ARMED SWORDSMAN (1971) released February 7th. The brand new script is written by wuxia specialist I Kuang and directed by frequent collaborator Chang Cheh. The action direction is by the team of Liu Chia-Liang and Tang Chia and as in the original also features a brand new weapon. Let's get busy!

Lung Yi  Zhi had long been a hero of the Jiang Hu and a defender of the underdog at least in the public eye. But "Big Hero Lung" as he was known had a dirty little secret (or two or three). Once Lung Yi Zhi had come up a bit in age he became insecure about his reputation as top fighter in the Jiang Hu. Among the young and up-coming fighters were the users of the two-sword fighting technique that seemed quite popular among the other young fighters. Lung Yi Zhi carefully constructed a weapon (a three-sectioned staff) and counter techniques to defeat this new style of swordplay but the problem still remained how to keep his name as top fighter valid and his reputation as defender intact all at the same time. He could hardly start challenging the younger swordsmen without being considered a bully.

Sadly, he began to fabricate situations  revolving around these young fighters, and then swoop in "to the rescue" and defeat them. Rather than kill his young opponents he would "punish" them by having them chop off their own right arms and swear to retire from the Jiang Hu forever. He would often rob a security escort's cargo and use his men to blame the targeted swordsman. He would then return the cargo after "punishing" the young swordsman even further raising his status as a hero. The punished swordsmen would never speak of the incident to anyone out of their very own shame. Over the years it has added up to quite a number of young swordsmen. Soon it would be the young hero Lei Li's turn. Lei Li used a long saber and a shorter companion knife. However his reputation for his arrogance almost outmatched his reputation for his swords skills. Our story begins as the hero Lei Li falls into Lung Yi Zhi's web of deceit. 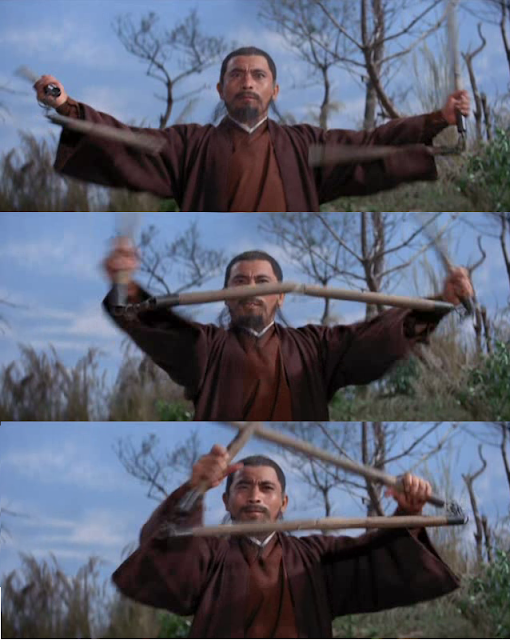 Replacing Jimmy Wang Yu as the new one-armed swordsman is David Chang as Lei Li going with a different type of character for the lead this time. Ti Lung is very much a co-star replacing Lisa Chiao Chiao's character as the influential person in the one-armed swordsman's life. Ti Lung's character is named Fung Jun Jie and is a rash young swordsman also inexperienced as was Lei Li. The two characters immediately relate to one another and the strong chemistry between the two actors makes this an old school bro-mance and communicates the necessary emotions as we move along in the story. Li Ching is Ba Jiao: the love interest and is the only woman in the movie so I guess she serves so we "don't get the wrong idea --not that there's anything wrong with that" as to the hero's preference.  She is also, along with the eatery keeper, responsible for an unintentional laugh when he suggests the ruffians only wanted "to have some harmless fun" with her. Yeah right!

For the "bad guys" Ku Feng is fantastic as the very complex Lung Yi Zhi the aging hero swordsman who keeps crossing the line to keep his status in the Jiang Hu but always wanting to jump back over to the side of righteous. A slippery slope indeed. Roles such as this usually go to Tien Feng or more veteran actors but Ku Feng was excellent casting as history has shown us. Chen Sing is also a villain of note being the Chief of Tiger Mansion where a lot of the action takes place.

FIGHT TIME!: Liu Chia Liang and Tang Chia (Tong Gaai) are back as the action choreographers. I counted six (6) full fight scenes not including little short scrimmages, so there is plenty of action but is it me or was there an attempt to tone down the carnage compared to the last version? but having just seen RETURN OF THE ONE-ARMED SWORDSMAN (1969) last week as opposed to seeing them two years apart, the carnage was a bit more vicious and varied in Return Of Then One-Armed Swordsman than in THE NEW ONE-ARMED SWORDSMAN (1971). Well as least to me. However the techniques were a bit more sophisticated in The New One-armed Swordsman, but then, all of the players this time around were much more martially inclined than Mr. Wang Yu, no offence of course. Over all, the techniques and combinations were now much more difficult in their execution and so the action is starting to favor a more knowledgeable fan base as it pertains to martial arts and as history shows, the trend continued. Also of note neither Liu Chia Liang nor Tang Chia made an on-screen appearance. They both usually do at least an cameo in a martial capacity of some sort. I don't know if this means anything, though.

RECOMMENDATION
Chang Cheh directed and I Kuang (Ni Kuang) was the lone script writer this time around. Over-all after the much much more of "The Return",  "The New" just seems like much much less. But by no means does "much much less " mean bad. By no stretch of the imagination is this a bad movie. Nor have I read any review or heard any fan say anything of the sort. So, what happened? Why no sequel? Why no continuation of the franchise with the new stars?

For my money they should have at least done one more sequel with everything amped up. Alas they did not. Does anybody know why? What ever the reception was of THE NEW ONE-ARMED SWORDSMAN (1971), TRIPLE IRONS (1973) clearly cemented the kung fu craze of the seventies in the United States.Movies theaters started specializing in kung fu double and triple features. We demanded more and we got it. I recommend THE NEW ONE-ARMED SWORDSMAN (1971) without hesitation or reservation. See you next time!