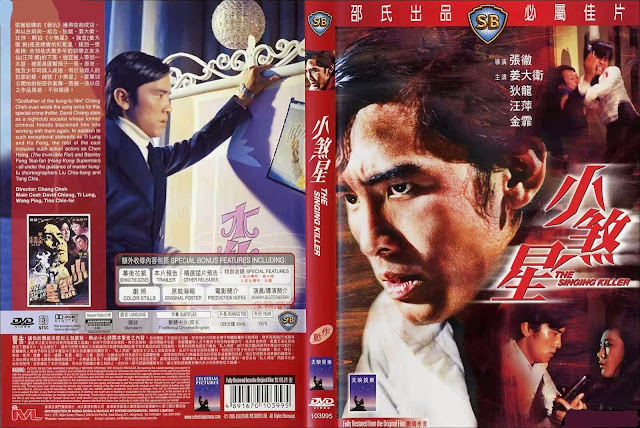 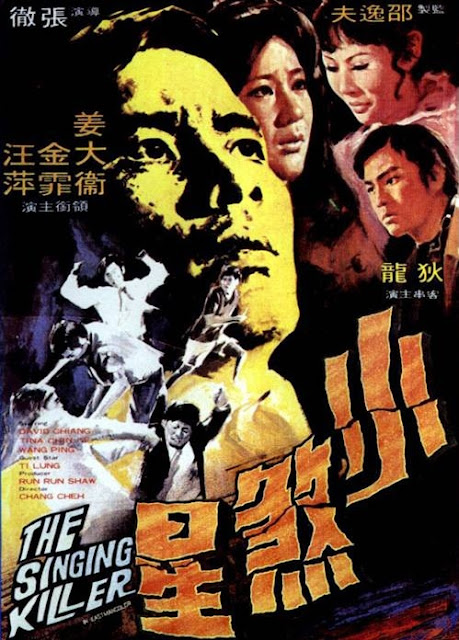 The Singing Killer (1970) released 12/22 is Shaw Brother's the last kung fu movie released in 1970. Sir Run Run Shaw produces Master Director Chang Cheh's heist / kung fu / modern music / romantic / young people's slice of life in Hong Kong / dramatic movie. This movie is definitely one for the time capsule with everything and the kitchen sink from the Shaw Brothers Studios packed inside it and it takes itself very seriously. The script is co-written by I Kuang and Chiu Kang-Chien, and the song lyrics are written by director Chang Cheh. Action direction is by the skillful team of Tang Chia and Liu Chia Liang so it is a legit kung fu movie. Let's get busy!

Mr. Fung is a music promoter and the manager of the Dragon Palace Night Club. Mr. Fung is also an independent member of the criminal underworld in Hong Kong. Occasionally his legit world and his illegal underworld would cross paths but this time they will totally collide as his multi-million dollar jewelry heist of Tse's Jewelry Shop is missing one "key" element. That element is someone to crack open the safe in the manager's office. Namely Mr. Fung's heist requires the skills of the Singing Killer himself, the former criminal gang member known as "Johnny".


Mr. Fung is keenly aware of Johnny's reluctance to return to a life of crime but he also knows Johnny's weakness --"Lily". Lily is the love of Johnny's life and his former gang member and girlfriend. They have long went their separate ways but Johnny would do anything to be reunited with Lily or at least, that's the plan...

FIGHT TIME: THE SINGING KILLER (1970) spared no effort by assigning the masterful team of Tang Chia and Liu Chia-Liang to do their fight choreography which consisted of street-fighting and some gun play. I counted six (6) fight scenes which is not very action-packed but with the drama and music necessary for the story any more action would have made for a much longer film which I can see them not wanting to risk on a multi-genre movie. Bottom line is you can't do too badly with these guys as your action directors, they do good as usual.


RECOMMENDATION:
I'll have to recommend THE SINGING KILLER (1971) if for no other reason than the off-the-cuff kick-in-the-stomach realism it portrayed in depicting life on the run for young street people in Hong Kong. If you are not used to Hong Kong movie realism then you might be taken aback when one of the female characters has to "pay the rent" for the group. Unfortunately this does not come until the movie is two thirds over and so you might be bored by the goody-goody two step of the early part of the movie. Over-all this is a movie one should "have" rather than "not-have" but I will not call it a must-see movie. It is, however, a unique look at Hong Kong in the 1970's and as such as some collectible value. See you next time!