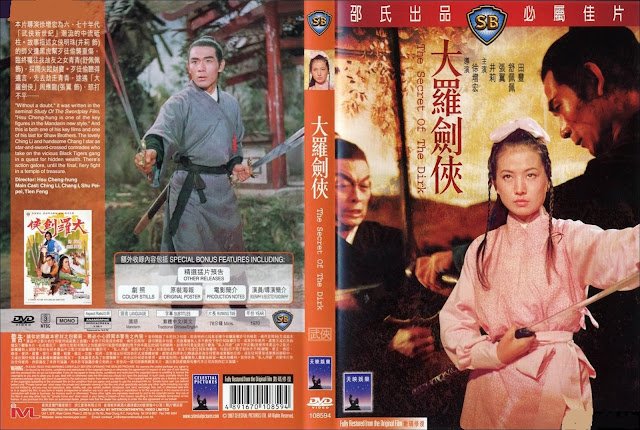 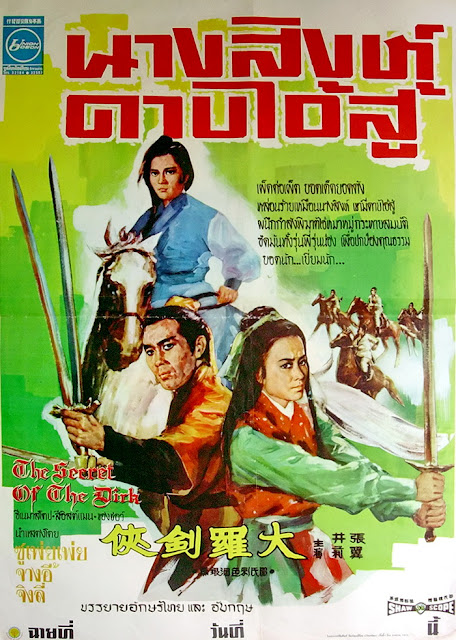 Runme Shaw produces Hsu Tseng-Hung's last directed movie for Shaw Brothers Studios: THE SECRET OF THE DIRK (1970). Hsu Tseng-Hung is the most famous director you do not know: he directed the very first movie in the wuxia genre, the wonderful BUT underrated classic, Temple of the Red Lotus (1965) [as well as the two sequels: The Twin Swords (1965) and The Sword and the Lute (1967)]. THE SECRET OF THE DIRK (1970) was released on October 24th, Yat Fong is the script writer and Tang Chia does the fight choreography all by his lonesome. The movie is told in an complex manner but it is really a simple two-party treasure hunt. Let's get busy!

A large army of robbers lead by one, Pa Tien Wang laid siege to the City of Liu for three months forcing its citizens to flee but not before pooling their most precious valuables together in single lock-box. The Liu City treasure's location was kept secret and try as they might neither the robbers nor Pa Tien Wang was able to get their hands on the treasure.

Twenty years later, Madame Liu returns to the village where a group of the former citizens of Liu City have hidden out. She is mortally wounded by members of The Black Tiger Gang. The Black Tiger Gang are a band of notorious robbers that have learned about the Liu City Treasure Lock-Box and wants it for themselves. Madame Liu had been out searching for some of the missing citizens of Liu City especially a female child named Liu Ching Ching who is the rightful heir of the City of Liu and true custodian of the treasure. Madame Liu had gotten a lead on the child's whereabouts when she was ambushed. On her deathbed, Madame Liu assigns her four students the task of finding the heir Liu Ching Ching and restoring the treasure to the survivors of Liu City.

Meanwhile The Black Tiger Gang locate and kidnap Liu Ching Ching with the hopes of discovering the location of the Liu Treasure but are coincidentally discovered by Da Law School senior member Zhou Ying Long, who is the sole wielder of the deadly Da Law Sword. Zhou Ying Long is a true knight errant of China and rescues Liu Ching Ching and takes the responsibility to escort her home.

FIGHT TIME: THE SECRET OF THE DIRK (1970) was fight choreographed solo by Tang Chia. I counted eight (8) fight scenes, most of them were very short but exciting. Some of them seemed pretty chaotic but they were few in number. The movie's finale was excellent, even though it stopped just a little sudden for me there was plenty of tension and excitement as the fights went back and forth from one on one to one versus many from Ching Li's fights to Chang Yi's fights and some shots showing both at the same time. Kudos!


HONORABLE MENTION: There were two honorable mentions, one was the Da Law Sword, a fantastic weapon and the other was Ching Li's performance in the finale when she took a double-handed grip on the sword and went to town you just knew it was about to get bloody!

Based on the small roles of some prominent stars of the time, I am going to conclude that this is one of the many films that sat a while on a shelf a minute before being released, which in and of itself is not at all a rare practice. Nevertheless, THE SECRET OF THE DIRK (1970) is an entertaining film, flaws and all so I am going to recommend it for general viewers but not necessarily a must have for collectors. The plot twists and red herrings will make you want to watch it a couple of times to figure out what you (or they) missed. Have fun with it! See you next time!