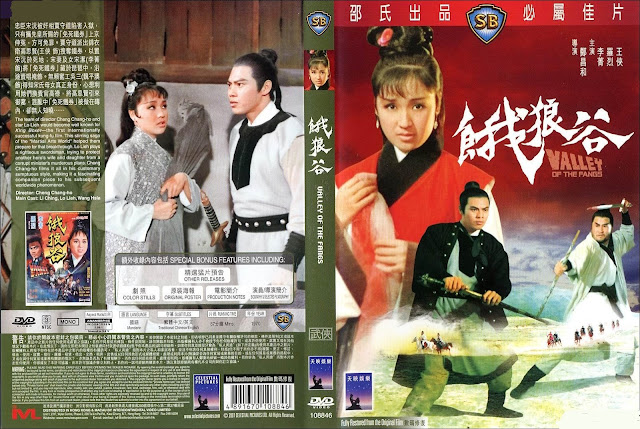 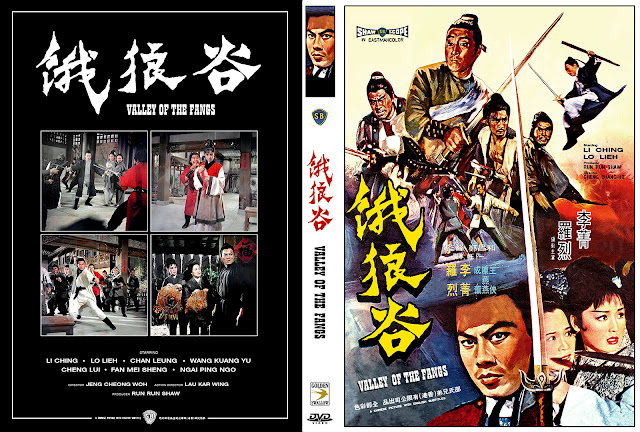 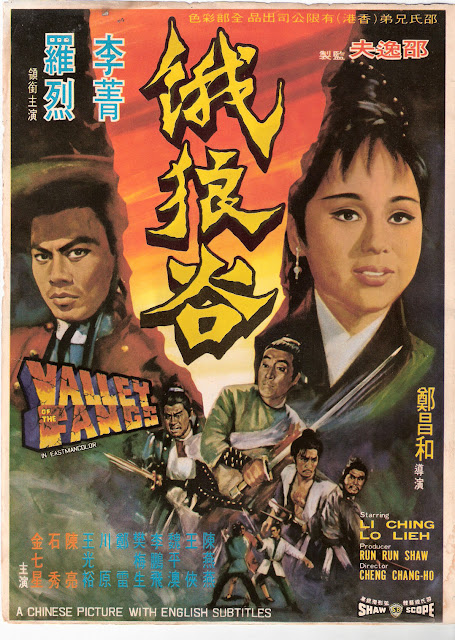 VALLEY OF THE FANGS (1970) was released October 6th produced by both Sir Run Run Shaw and Lee Ji-Ryong. Written by Wong Po-I and directed by the very talented Walter Chung Chang-Hwa it is a mission wuxia tale with the oft used tale of the Ming Dynasty during the rule of a child emperor and a corrupt eunuch and a corrupt prime minister. A loyal subject is unjustly accused of treason and his loved ones must find a way to save them. The action choreography is handled by Liu Chia Yung the younger brother of Liu Chia Liang. Let's get busy!

Song Yuan is the senior lecturer in the Imperial Academy. He was honored by the emperor with an Iron Shield Pardon for his loyalty and contributions to the empire. The person presenting this small token can even be pardoned a death sentence. When the emperor died, his very young son became emperor and  Prime Minister Jia Shoudao took advantage of the child and oppressed the common people. Song Yuan refused to go along with the abuse of power by the prime minister and so was framed for treason, imprisoned and tortured with the prospects of being put to death.

The Head Of Punishment, Geng Shangde visits the child emperor to ask for a pardon of Song Yuan as a favor to him (Geng Shangde) but is rebuffed. He then goes and tells Song Yuan's wife and daughter they must use the Iron Shield Pardon as it is the only way to gain Song Yuan's release. Unfortunately the child emperor's eunuch has followed The Head Of Punishment and alerts Prime Minister Jia Shoudao of the Song's plan to use The Iron Shield Pardon. Prime Minister Jia Shoudao assigns Commander Gao Sixian of the Jin Yi Wei to confiscate the Iron Shield Pardon but it must be done in secret because Song Yuan's loyalty to the previous emperor is well known and he is loved by the people.

Song Yuan's wife and daughter disguise themselves as street entertainers and hide the Iron Shield Pardon on their person as they make their journey to the capital to save the head of their family.  The journey is dangerous enough as it is but to make it to the capitol they must pass through the dreaded Valley Of The Fangs where the emperor's new palace is under construction. Will they make it?


HONORABLE MENTION: Paul Wei Pin-Ao as Hu San shows his skills as an excellent character actor.  In fact, the moment the movie gets to "THE VALLEY OF THE FANGS" with the workers in the kiln it hits a higher note of drama than the rest of the film and the actors in it rise to the occasion! Chen Sing, Luk Chuen, Someno Yukio, and Cheng Lui have small roles in this movie.

FIGHT TIME: Liu Chia-Yung handles the fight choreography all by himself for the first time so that alone makes this a collectible film. I counted a total of nine (9) fight scenes making for an action-packed movie. The techniques were good and added to the excitement of the film. Bravo.
HONORABLE MENTION: Liu Chia-Yung's choreography (especially with Paul Wei Pin-Ao) during the kiln sequence shows his skills as in putting the right technique with the correct character for maximum entertainment value, double bravo!!

VALLEY OF THE FANGS (1970) is certainly good entertainment but it is a showcase for the action choreography talents of Liu Chia-Yung and that makes this first solo job from him a collectible and must have. Watching some of the faces on the actors here make for a good time if group watching as well. So please see this film if you have the opportunity to do so. See you next time!