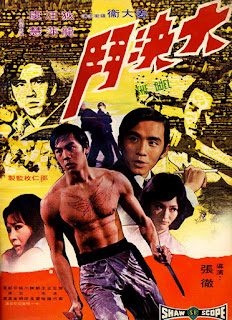 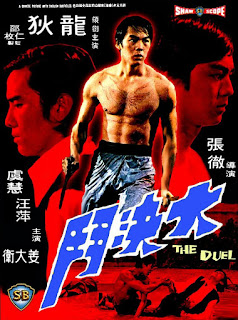 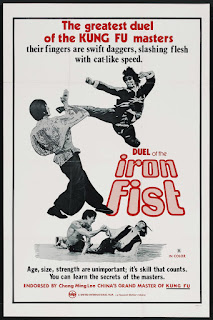 Released on April 21st, THE DUEL (1971) is yet another well-loved movie produced by the elder brother Shaw: Runme Shaw. It is written by, surprise, surprise Chiu Kang-Chien, the writer of THE SINGING KILLER (1970) but not so surprisingly, also the writer of THE BELLS OF DEATH (1968). THE DUEL (1971) is a tale of intrigue set on the backdrop of the birth of The Republic of China. The great Chang Cheh is the director working once again with the action direction team of Yuen Cheung-Yan and Tang Chia putting in their most exciting work to date! Let’s get busy!

On the surface of it THE DUEL (1971) is a tale of a fateful duel between two fighters. Tang Ren Jie is fighting to avenge his godfather’s death at the hands of a journeyman in the underworld (the Rambler), Jian Nan, a highly skilled fight with no ties to any one gang and as such can be persuaded to help one gang or another. In this case however, Jian Nan is deceived in killing Tang Ren Jie’s godfather, Shen Tian Hung, an elder gang boss who is actually retiring from the criminal life after taking revenge for a friend of his who was also killed recently. Jian Nan must fight Tang Ren Jie but he is sorrowful for what he feels is an unworthy kill for him since his victim was going to retire from the gang life and become a civilian.
THE DUEL (1971) takes place during “The Warlord Era” or the period after the Qing Dynasty from 1916 to 1927. Whether they were called warlords or bandits or gangsters, these people wrecked havoc on life in Mainland China where it was a “man’s world” and if you were weak or a woman you could be forced to do whatever you were told and corruption was everywhere and justice was whatever the powerful said it was. I mention this because the more you know of China and this era the more there is for you to experience in THE DUEL (1971), it is that deep.  There are double crosses galore and everybody has deep characterization if you care to look for it. A look at life in China after the Qing Imperial government and before Communist Party rule, THE DUEL (1971) is a must have for everyone's library of Asian films.

HONORABLE MENTION: Chuen Yuen is absolutely repulsive as the big bad, excellent acting especially when you are not suppose to focused on him.

FIGHT TIME: THE DUEL (1971) was choreographed by the fight team of Tang Chia and Yuen Cheung-Yan. Their design style could certainly be called “fast and furious” and it was again difficult for me to grab screen shots of action without any blur. They also like to keep multiple fights working simultaneously making for some very exciting scenes where you could get caught up in just trying to follow everything. I counted twelve (12) fight scenes making this one of the most fight filled movies to date. No wonder this one is a fan favorite!
HONORABLE MENTION: The all-star cast of henchmen used throughout the film. Including: Liu Chia-Yung, Yuen Woo Ping, Fung Hak-On, Cliff Lok, Wang Chung, Yuen Shun-Yi, Chen Kuan-Tai, Bruce Tong Yim-Chaan, and more!

RECOMMENDATION: Any Shaw Brothers, David Chiang and Ti Lung co-starring project needs no one's recommendation, especially mine. It is entertaining and collectible. It is automatically a must-see and a must-have. See you next time!