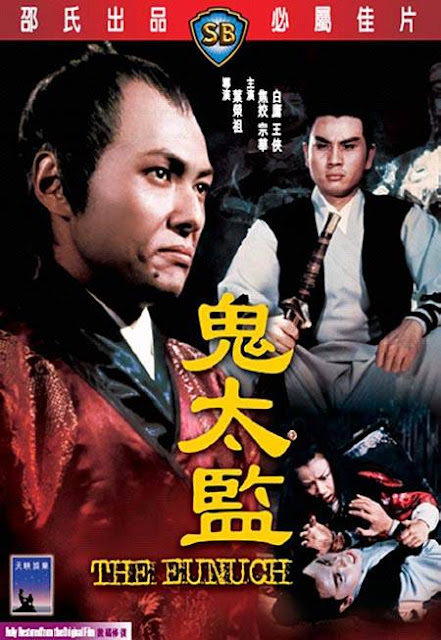 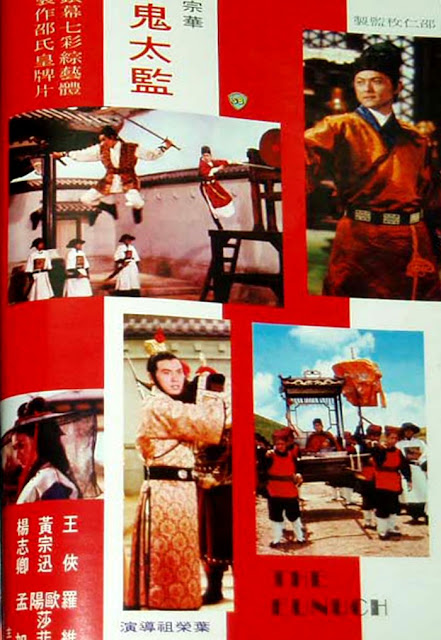 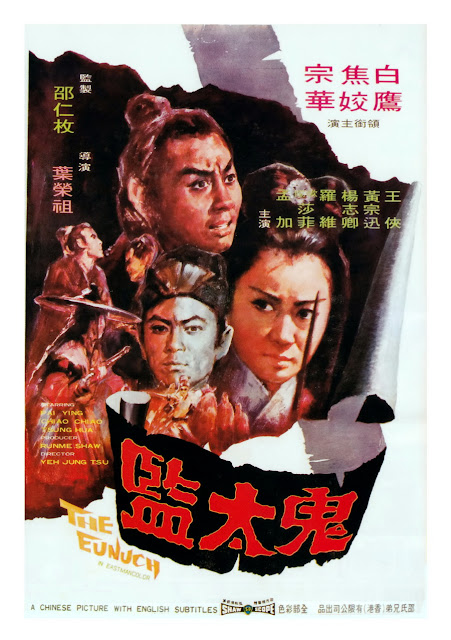 Released May 12th, THE EUNUCH (1971) is the creative work of prolific screenwriter Lo Wei who surprisingly did NOT direct this movie himself but instead works with brand new director Teddy Yip Wing-Cho. The action director is Simon Chui Yee-Ang and the man that put it all together is the great producer Runme Shaw. This is a very straightforward story of treachery and revenge somewhat based on historical fact. All right, let’s get busy!

From the middle of the Zhou Dynasty (6th century B.C.) to the end of Imperial China in the Qing Dynasty (1912 A.D.) the Emperors of China did not trust men and their carnal desires and so used Eunuchs to work in the palace close to their concubines so there was no chance of sexual impropriety in the court. Unfortunately the Eunuchs found other ways to betray the trust and misuse the emperor’s power that was uniquely theirs. The eunuchs were hated with a passion that is often reserved for those that are "different" and so there are many such stories in Chinese history about their misdeeds. This is just one of them that is also one of revenge. Please enjoy it,... if you can.


FIGHT TIME: THE EUNUCH (1971) was choreographed by Simon Chui Yee-Ang by himself (he often shares the chores with Sammo Hung) the last time he choreographed by himself was on A Taste Of Cold Steel (1970) and he once again does a great job and even improves on his previous work. I counted six (6) fight scenes including the extra long finale but I never felt bored at any time during the film. I loved his work most notably with the pole and Lisa Chiao Chiao’s solo fight at the temple was fierce!


HONORABLE MENTION: Not only was Simon Chui Yee-Ang’s choreography top quality but Lisa Chiao Chiao’s performance during her solo fight at the temple equally exceptional. I totally believed each killing technique and I also believed her taking on such a large number of men at one time with a combination of skill and rage!! Bravo!

RECOMMENDATION: THE EUNUCH (1971) is an emotionally charged journey of Chinese history that is well worth watching. In addition, it is Teddy Yip Wing-Cho’s first directed movie and since he goes on to direct (and write) THE THUNDER KICK (1974), (direct only) SLEEPING FIST (1979) and (direct only) THE THUNDERING MANTIS (1980) it is, at least in my opinion a collectible conversation piece for kung fu flick lovers of all ages. So, overall I’m going to say it is a must-have and certainly a must-see as an interesting part of Shaw Brothers and karate / kung fu movie history. See you next time!