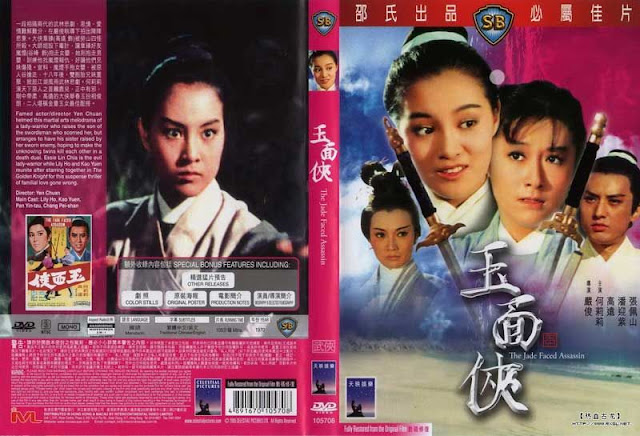 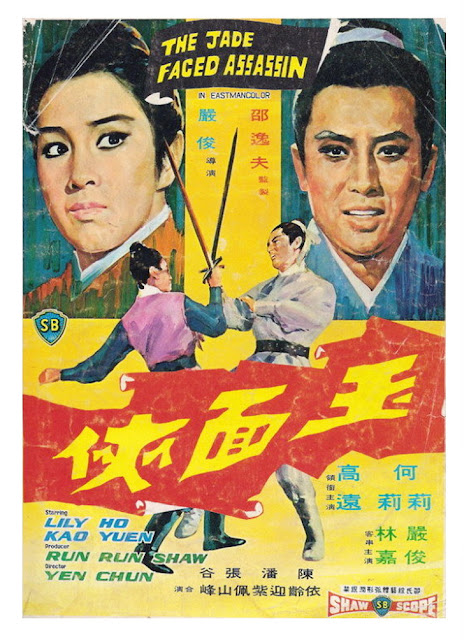 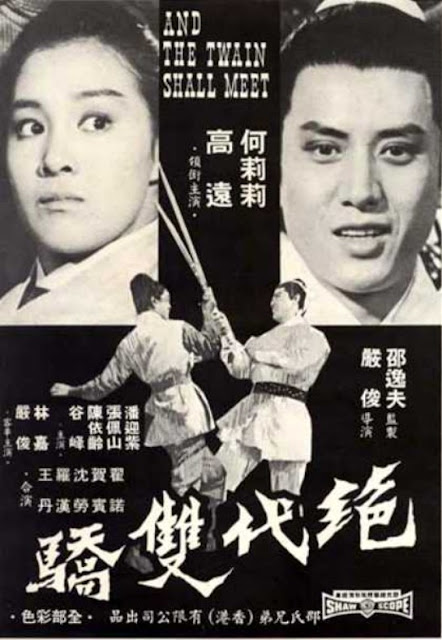 Released April 9th, THE JADE FACED ASSASSIN (1971) is the first movie adaptation of (pen name) Gu Long’s extremely popular wuxia novel: Jue Dai Shuang Jiao which has been called in English: The Proud Twins, Two Peerless Heroes, The Legendary Siblings, etc. It was produced by Sir Run Run Shaw, scripted by Wong Fung [The Golden Knight (1970)], and directed by Yan Jun [The Iron Buddha (1970)] who, this time, does not use or at least does not credit an action director which is surprising considering the popularity of this stand-alone novel from Gu Long but we shall see what we shall see, eh? Let me point out from the outset that the twins are both male in the novel but Sir Run Run Shaw went for the female lead as is his usual choice so one twin is female and the other is male. Okay, let’s get busy!

The head master of the Chang Chuen Clan had bestowed the Clan leadership to his most senior male student, Chang Chun on his deathbed. This is done in the Jiang Hu by handing over a badge known as the Headmaster's Creed. Unfortunately Chang Chun was not the most skillful of his pupils. That honor went to the older of his three daughters. While the second daughter feel in love with Chang Chun, he had an affair and twin children with the youngest daughter and he had no choice after their master’s death but to take his family and run for their lives. But before he left, he sent a message to his foster brother the hero, Lian Lan Yan informing him of his plight and asking for help.

Chang Chun, his wife and twin infants had only gone a short way when The Weird Four of Lao Shan ambushed them, taking the Chang Chuen Clan Creed in their possession and were intent on murdering them all. Suddenly, the second elder sister appeared and struck down the whole gang saving them. But when the eldest sister came everything changed. She was the big sister and the highest skilled and by right she should be the clan headmaster so she killed her youngest sister and her husband and grabbed a sword intent on o murdering the twin babies.

However the second sister could not bear the murder of the two infants so she convinced her older sister that they should instead, separate the two siblings and create a situation where they would end up killing each other making for an exquisite revenge. The eldest sister agreed and they went back to their mansion taking the male sibling. Over a period of eighteen years, she raised the child (Hua Yu Chun) as a member of the Chang Chuen Clan and made him vow to find Lian Lan Yan and kill him and any of his family members as sworn enemies of the clan.

When the Hero Lian Lan Yan finally comes across the scene of the bloodied bodies he finds two survivors: the female infant and Black Face, one of The Weird Four of Lan Shan. Black Face tells Lian Lan Yan that Chang Zhai set him up as a fall guy and is waiting at Happy Valley. Hero Lian leaves Black Face right where he is to die while taking the female infant with him and goes off to Happy Valley to find Chang Zhai.

When Hero Lian gets to Happy Valley he finds a haven for villains and the evil people there promptly trick him and beat him nearly to death. But Lan Cun Xiu, the Poison Scholar has come to Happy Valley to turn over a new leaf, so he deceives the other residents of Happy Valley into letting him keep Hero Lian to use as a human guinea pig while the villains decide to keep the female infant with the intention of raising her and training her to be a champion of evil. However over the course of eighteen years she (Xiao Lu Er) learns her true identity from Lan Cun Xiu and is told to find Chang Zhai and revenge her father's death.


Now they both walk the Jiang Hu on a collision course with destiny. I am not going to keep it from you, this is an epic tale, and an adaptation worthy of the original novel and is a must see!

HONORABLE MENTION: Lily Ho Li-Li has captured the spirit of the character Xiao Lu Er from Gu Long's novel and draws us in enough to enjoy the movie. Good acting!

FIGHT TIME: THE JADE FACED ASSASSIN (1971) is directed by Yan Jun who (according to the credits) doubles as the action director. I counted ten (10) fight scenes including the finale and there is plenty of action here to entertain us along with a great story. I must say though, the action has a low-tech, old fashioned feel (not as slick as say, Tang Chia’s work). Funny thing is, the choreography is very well suited for the feel of the movie and complements the background music and overall style of the film. Good job overall
HONORABLE MENTION: Liu Chia-Yung has a minor cameo, and I spotted Wang Chung and Yuen Cheung-Yan as extras / stuntmen.

RECOMMENDATION: THE JADE FACED ASSASSIN (1971) is a “must see” and opportunity to experience popular Chinese modern literature without learning to read the most difficult written language (imo) on earth.  As the first adaptation of Gu Long’s very popular novel it should have some collector’s value as well. Get this movie at all cost, don’t say I didn’t tell ya! See you next time!

If you liked this review please comment on the blog, become a follower of the blog, join me on my Facebook account by sending me a message first and then a friend request so I know who I am "friending" (  https://www.facebook.com/Michael529P   ) and like my Facebook page: SHAW Brothers Kung Fu Movies 1965-1986. I thank you and would appreciate it very much!