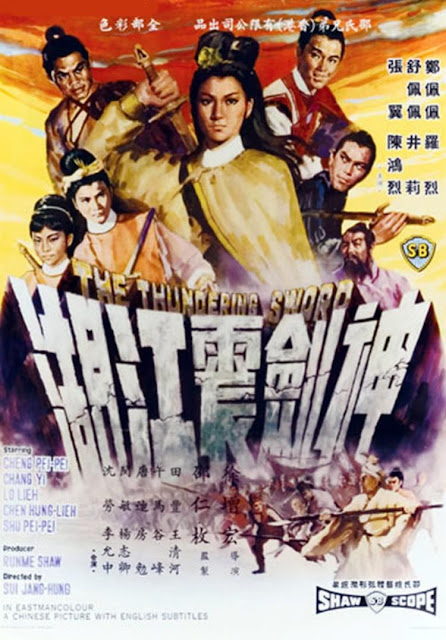 This wuxia story actually takes place in the "Jiang Hu" which literally is translated to "rivers and lakes" but is what the subculture of the martial world calls itself. Those of the Jiang Hu considers themselves separate and outside of regular society but not so much above it as beyond it. In spite of the goings on and the masters being well known through out the world, it is regarded as totally fictitious by those of mainstream society.

In THE THUNDERING SWORD (1967) the Jiang Hu is concerned about the existence of a sword that "can shatter the world's two precious swords" and is called The Thundering Sword. Many of the martial clans members have begun vicious slaughter in order to get their hands on this powerful weapon in order to have their own way in the martial world. Chief Instructor and High Priest of the Yuan Mountain Clan for his part, has devoted three months of seclusion to divine a way of destroying the sword to bring peace back to the martial world. Failing to find a solution he sends two of his highly skilled students (Yu Chen Wan andChiang Kwun Yuan) down the mountain to find the sword and bring it back so he may examine and replicate the sword and thereby find a way of destroying it, believing that as long as such a sword exist there will be no peace. After leavingBaiyun Temple and descending down Yuan Mountain the two classmates go separate ways and agree to meet up later on.

Yu Chen Wan's journey down the mountain has him being passed by a lovely swords-woman (So Jiau Jiau) on horseback. Up ahead, and out of his sight she is ambushed by ruffians who demand her sword. She quite viciously and literally whips the hell out of them and uses poison darts to kill them. He catches up to her only to witness the end result. He erroneously accuses her of killing innocents but she clarifies her position as justifiable. Their brief exchange being enough for her to be swept off her feet with his chivalrous demeanor, she still, never the less, gallops off telling him -- her killing or not, is none of his concern.

We catch up with Chiang Kwun Yuan some miles and time later as it is now nightfall and he is at a grave site stumbling upon some grave robbers entering a tomb. Curiosity gets the best of him as he creeps up behind them inside the tomb to see them robbing the tomb but falling victim to some booby traps inside. He suddenly sees lying on the tomb floor The Thundering Sword which he quickly grabs and negotiates his way back outside past more booby traps to outside the tomb. He plants the sword in the dirt and reaches for the tombstone to replace it and suddenly a whip snares the sword from the dirt and snatches it to the whip's owner who is none other than the very same swords-woman (So Jiau Jiau) met by his classmate earlier. He barely gets out "who are you?" when she flings her poison darts at him and he falls down dropping his clan's defensive coins besides him. Recognizing the coins as belonging to the clan of her newly admired acquaintance she immediately deeply regrets her rash actions and plots to make amends but it is just not her day...

As far as I know, this is the first attempt by SHAW BROTHERS STUDIOS to adapt a wuxia novel for the big screen for their new wuxia movie genre. the novel they chose was Jin Yong's epic wuxia novel HEAVEN SWORD and DRAGON SABER. To be more precise it is an adaptation of just Zhang Wuji's (the main protagonist) parents' first meeting and love story and goes no further than that. I am going to have to give this first time effort a pass on so many levels for a handful of reasons including being the first attempt. In short, this tiny seed in 1967 is what becomes the mighty oak that is the industry of martial arts movies today in 2015. It has grown so successfully that the industry is still making television and movie and even game adaptations of these writings and characters that to harshly criticize this first attempt is a bit more hypocritical than I can stand. I won't do it.

THE THUNDERING SWORD (1967) was adapted for the big screen by ProducerRunme Shaw, screen writer Sheng Chiang and directed by Hsu Cheng-Hung. It stars Cheng Pei Pei as So Jiau Jiau, Chang Yi as Yu Chien Wan, and Lo Lieh as Ching Kwun Yuan. Other than Jimmy Wang Yu everybody else that was somebody was in this movie!
(My guess is that Runme Shaw wanted a blank canvas for the starring role so no Jimmy Wang Yu nor his mentor Chang Cheh.)
Future Star Gazing: Shu Pei Pei, Tien Feng, Ku Wen-Chung, Fang Mian, Liu Chia Liang, Liu Chia Yung, Tong Gai, Cliff Lok, Wu Ma, Ku Feng, Chiu Hung, Wong Ching Ho and so many more!

Fight Time!: Liu Chia Liang and Tong Gaai are the action directors for this adaptation for which there are only three (3) fights. The quality of the fights are very good, especially Cheng Pei Pei's fights which are very realistic and look nothing like her fighting from COME DRINK WITH ME (1966). Now again I say, I am going to forego criticism on this first attempt at an adaptation of an epic novel. Needless to say they get it right eventually so there is no need for me to grandstand like I would have done any better my first time at anything.

THE THUNDERING SWORD (1967) is historically significant and has some dramatic suspense to boot. For these reasons I will strongly recommend the purchase and viewing of this film for collectors, fans and students of this genre. See you next time!