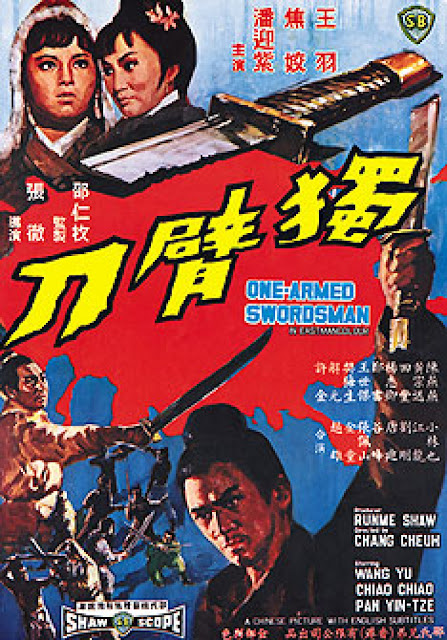 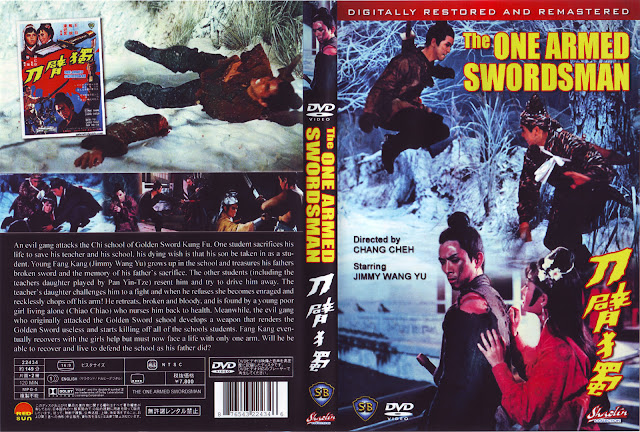 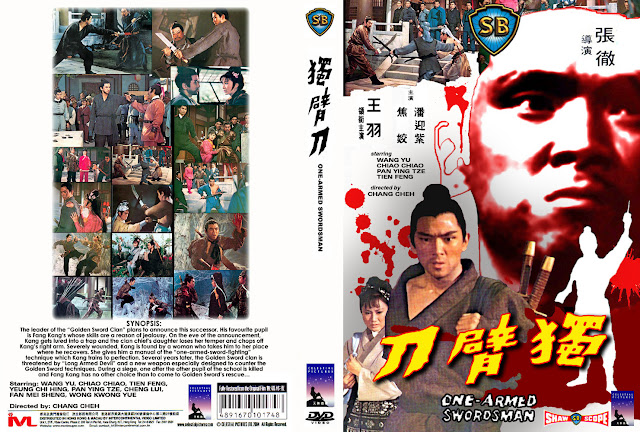 This is how it should be done! I noted in my last review the absence of both Jimmy Wang Yu and Chang Cheh in THE THUNDERING SWORD (1967), the Shaw Brothers' adaptation of Jin Yong's Heaven Sword and Dragon Saber. Well now Shaw Brothers is right back with another Jin Yong adaptation. This time, of the even more popular Return of the Condor Heroes  (which is the novel before or prequel to Heaven Sword and Dragon Saber) and they're doing it "Chang Cheh Style"!

Let me be precise about what they are adapting. In Return of the Condor Heroes the main protagonist Yang Guo is adopted by his father's (Yang Kang) blood brother Guo Jing and taken to Peach Blossom Island to live with Guo Jing and his wife and learn kung fu. Guo Jing has three other students one of them being his own daughter: Guo Fu. She loves and hates Yang Guo (it's complicated) and after they become young adults, eventually cuts off his right arm because he slaps her. They go no further than this.

And now, the movie... Qi Ru Feng is getting old and is feeling it. known as The Magic Swordsman he is the Grand-master of the Golden Sword School and famous throughout the Jiang Hu as a master of his sword technique and teacher to scores of pupils --some of them quite good, but still he has decided to retire. So he has come face to face with the task of choosing a successor to his school and is deciding that the son of an old servant of his, Gang Kang, whose father had saved his life and was killed for his trouble has more than repaid him by being the most promising young student currently at his school. He is also hoping Gang Kang is willing to marry his daughter, Qi Pei-Er, who is not only not skillful enough to take over for him running the school but is in fact, very spoiled and quite willful. He is planning to make his intentions known at his fifty-fifth birthday party. His family, friends and beloved students will all be there to hear him say it is time to him to hang up his sword and no longer travel the Jiang Hu. It was time.

"You may not fight again but there's many things you could learn. To farm, to fish, great many things --it's just a matter of will. You'll learn if you want to."

What a woman, what a woman. She found Gang Kang having fallen in her boat one cold winter's night. His right arm missing and a bloody mess was where his right arm should have been. Instead of being frightened she took him to her village and then to her home and nursed him back to health. She stayed by his side, silently vowing to always be together, if he would have her.

This is the story of the One-armed swordsman. A time honored classic about people who learn to become something greater than themselves and those of us who fail.

This fan favorite wuxia novel of Jin Yong was adapted for the silver screen by non other than Chang Cheh himself along with Ni Huang (later spelled I Huang). Ni Huang a respected wuxia novelist himself is also a respected authority on Jin Yong's works and even wrote a list of Jin Yong's novels in the order of his perceived greatness which again and at the risk of being redundant is very well respected. Obviously they did not disappoint. The all-star-cast head by Jimmy Wang Yu does a great job but Wang Yu really out does himself in capturing what a person raised the way Gang Kang was would react to certain stimuli. (For instance the only time he laughs is after he physically humiliates Gou Fu knowing full well he had no intention of harming her but had been wanting to knock her about for some time and yet, the first time he ever calls her "sister" is only after she cuts off his arm!) Chang Cheh perfectly cast his favorite actor in this movie. Well done all!
Future Star Gazing : I really considered skipping this section all together because it would be easier to name the three stars not in this movie than all the rest of the stars that are in it. Suffice it to say everybody is here!

Fight Time! : The fight choreography in ONE-ARMED SWORDSMAN (1967) was done by the superb team of Tong Gaai and Liu Chia-Liang and is so much a part of the story that it should get co-star status. In fact Tong Gaai and Liu Chia-Liang also deserve to be named co-stars for the parts they play in the movie. I countedseven (7) full fight scenes in this movie and they are in half of them. The mirror images of the fighters because the enemy had studied the other's fighting style so perfectly was not lost on me and I understood how the students were at a loss at what to do when they first faced these opponents but the grand-master was not. Great job!

ONE-ARMED SWORDSMAN (1967) is historically significant in being the first million dollar grossing film in Hong Kong. It is also considered by many to mark the style of casting a "anti -hero" in martial arts movies as can be seen in Clint Eastwood type westerns. It is the first film in my collection of Shaw Brothers martial arts movies that has the male lead getting top billing over the women stars! The story line is very strong, it is action packed and the martial art techniques figure into the story as well as the character of both the protagonists and antagonists. This is clearly a must see movie for fans and collectors! It gets my most enthusiastic recommendation! See you next time! 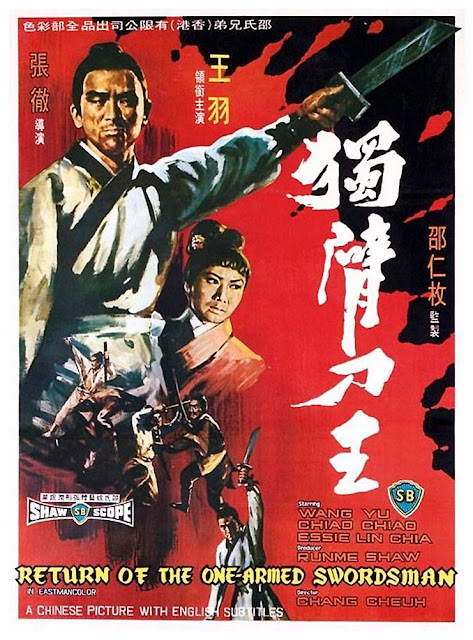