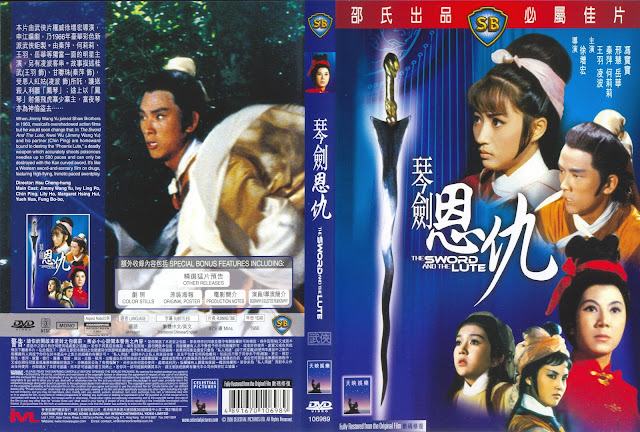 THE SWORD AND THE LUTE is the next and last movie of our trilogy and takes place some time after the conclusion of THE TWIN SWORDS and the Gan family's raid on THE TEMPLE OF THE RED LOTUS to rescue the third generation's daughter, Gan Lianzhu from the clutches of the Red Lotus Clan.

In the previous movie (THE TWIN SWORDS) we were introduced to three sacred items but only shown two of them. The first sacred item is The Fish Intestine Sword. It is the Gan's family heirloom and cuts all kinds of iron. This item was handed down to Gan Xiaoling, a forth generation daughter and is in her possession. (In THE SWORD AND THE LUTE it is called The Invincible Sword). The second sacred item is the Phoenix Lute. The Phoenix Lute is a weapon of mass destruction that can hurl forward scores of hair thin poisonous needles. This attack is impossible to guard against within 500 steps. The Phoenix Lute is not made of wood or stone and only the Fish Intestine Sword can destroy it. The Phoenix Lute was acquired by The Red Lady (In THE SWORD AND THE LUTE she is called The Scarlet Maid) with great effort and is in her possession. The third and final sacred item is the Seven Stars Stone of the Sun family in Baifu (In THE SWORD AND THE LUTE it is called the Shen family's heirloom). We never see the stone but are told only it can heal people injured by the Phoenix Lute by drawing the needles out of the injured party. These sacred items play heavily in our final story.

In THE TWIN SWORDS Gan Lianzhu is being held captive in THE TEMPLE OF THE RED LOTUS so the Gan family go to rescue her. The losses of the Gan family during their battle with the Red Lotus Clan and the successful rescuing of Lianzhu from the Red Lotus Temple causes the family great sorrow and they decide to retire from jiang hu and live in seclusion in an undisclosed location. Gui Wu (Gan Lianzhu's husband) and Gan Lianzhu have gone to Scarlet Maid's Magic Mountain retreat (where fairies live) to improve their martial arts with the Scarlet Maid and have become known as the Yin Yang Swordmen. All of the above takes place off-screen after the end of THE TWIN SWORDS but is given to us in pieces during THE SWORD AND THE LUTE.


The movie begins with the Yin Yang Swordmen leaving Scarlet Maid's place with the Phoenix Lute and instructions from the Scarlet Maid to not only not use the Phoenix Lute but to destroy it with the Gan's family heirloom: The Invincible Sword. On their way Gui Wu suggest they cut through the woods, but once there, they are ambushed by the Flying Tiger Clan intent on robbing them. The Flying Tiger Clan proves to be quite large in number and after Gui Wu sees a large number of them surrounding his wife, decides he has had enough and retrieves the Phoenix Lute from Gan Lianzhu's horse and fires it on the robbers. A great number of them are indeed hit and all that can appear to run off. The squad leader of the bandits however is the clan's "thinker" (Master Wen). He is uninjured and intrigued by the weapon so he sneakily follows Wu'er and Lianzhu as they leave the woods with Lianzhu quite upset with Wu'er. As they stop at a small natural water fall, she scolds him for disobeying his aunt, the Scarlet Maid. Master Wen is extremely fortunate to be able to eavesdrop on the couple and through their argument learns of the Shen family's Seven Stars Stone. He decides he has learned some valuable information worthy of his chief's attention. As he turns to leave he realizes the arguing young couple are not paying any attention to their horses or the Phoenix Lute...

THE SWORD AND THE LUTE has a excellent cast, first we have returning characters Jimmy Wang Yu as Gui Wu, Chin Ping as Gan Lingzhu, Petrina Fung Bo-Bo as Gan Xiaoling and Ivy Ling Po as the Scarlet Maid. Then we have some cast members returning but with a twist, such as Lo Lieh as his former character's little brother Du Ying, Ku Feng in pretty much a cameo role as Master Song, Lee Wan Chung is back as a villian but this time the Flying Tiger Clan's Master Wen, Cheng Miu is also back as the clan chief but this time as Master Flying Tiger. Wu Ma is the chief's son Bao Erh). Joining the cast are Yuen Hua as Master Shen Shu-Wen responsible for the Shen family's Seven Stars Stone. Peng Peng from the famous multi-part JOURNEY TO THE WEST movies is a special guest star as Xiaoling's guardian Da Shin. For the villains, Lily Ho joins the cast as the fierce Wei Mei-Er, the Flying Tiger's daughter and Clan's lady fighter who takes a back seat to no one! The great Liu Chia-Liang is one of the Flying Tigers upper level henchmen and the legendary Sam Seed himself,Yuen Siu-tien plays the only Red Lotus Clan fake monk left in the movie series.

And now for my favorite part of the kung fu movie, the kung fu! I count 7 fight scenes in THE SWORD AND THE LUTE which means there is sufficient kung fu in the movie to keep you from getting bored --unless the fight scenes suck, which here, they don't but...
I remember being a lot happier with the quality of the fight scenes in the first two movies. The fight scenes in THE SWORD AND THE LUTE lack the edge of the first two movies. Something is missing or something seems just a little off when they throw down and I don't buy it one hundred percent but it is still a sale. This is a wuxia series so there is no need to criticize mystical weapons, items or chi kung in combat application. That's what these movies do. If this is not your thing, then please, there are plenty of dramas out there to satisfy you.

THE SWORD AND THE LUTE (1967) is not the best over-all movie of the three [TEMPLE OF THE RED LOTUS (1965) and THE TWIN SWORDS (1965) being the other two] but is the best of the three as a stand alone movie. I feel THE TWIN SWORDS is the best over-all movie of the three based on its focus and the quality of its fight scenes. I did like THE SWORD AND THE LUTE, and would very much recommend it to everyone on the strength of its plot and subplots. I would also like to advocate it to be remade but as a prequel to Lady Sun's Justice but that is a debate for another time.