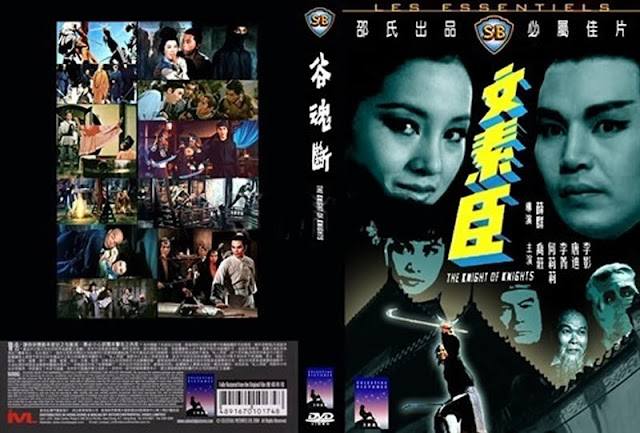 THE KNIGHT OF KNIGHTS (1966)
The actual name of The Knight Of Knights is Wen Suchen, the title character of the movie. 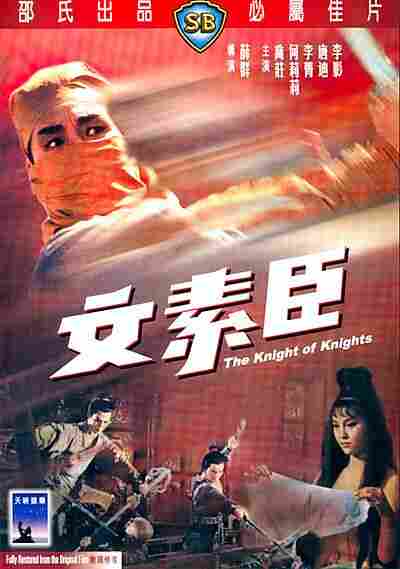 During the Ming Dynasty in China, King Jing entered in an agreement with Imperial Eunuch Pei to increase his power and influence in southern China with the ultimate goal being to usurp the power of the Emperor. To this end King Jing has enlisted the aid of the bandit Minkong and his men along with Governor Wang of the southern province of Haimin. Minkong and his men disguise themselves as monks and take over Zhaoqing Monasterylocated in Haimin and use it as a base of operations and fill it with booby traps, secret rooms and an underground chamber. The fake monks then begin kidnapping women like it is free, ending up with almost a dozen women captive bringing a lot of attention to the monastery. Governor Wang for his part has levied unfair taxes of all sorts on the people and has even seized some of their lands unfairly. The people are very upset about this and seek relief.

Word gets to The Emperor and he asks Imperial Inspector Lin to investigate the southern provinces. Inspector Lin sends a letter to his nephew (Wen Suchen of the Seven Men Of Dragon School) asking him to investigate Zhaoqing Monastery. As luck would have it however Wen Suchen's mother is ill at the time he receives the letter so he sends his six classmates ahead of him to investigate in his stead.  Although the six classmates are highly trained in martial arts they are no match for the hit and run tactics, the booby traps as well as the great number of men at the monastery and are wiped out but with one classmate escaping barely clinging to life. It is there dying along the road on his way to Zhaoqing Monastery that Wen Suchen discovers his barely alive classmate and learns of their fate. After a briefly worded warning the classmate dies as well. Wen Suchen is left with his two young students to go undercover to Zhaoqing Monastery to bring this whole case to a close for his uncle Inspector Lin and the emperor.

If elements of this scenario sounded familiar to you it is because you saw it all before in TEMPLE OF THE RED LOTUS and THE TWIN SWORDS (1965) both recently released before THE KNIGHT OF KNIGHTS.  The USA television network NBC used to say: "If you haven't seen it; then it's new to you!" But still, with such rehashed plot devices how did Shaw Brothers think it could fill the seats for this movie? Well, let's start with the male Hong Kong heartthrob in Chiao Chuang (aka Kiu Chong) as the movie's headliner Wen Suchen. Next let's add some Taiwanese sizzle with the voluptuous Lily Ho as his cousin and love interest in a partial nude scene which was very much the talk of the day.  (In fact, I think this very movie is responsible for most martial art movies to begin to have a soft porn scene included in them.)  Now --dash in a cameo with the lovely Li Ching who was billed in the original trailer as "Asia Movie Queen" and who the fans nicknamed in fact "Baby Queen" and was given top billing as a special guest star in the credits and you've got a pretty sure bet people will come to see this movie!

THE KNIGHT OF KNIGHTS did not take any unnecessary chances on untalented cast members in minor roles either. For the good guys they had veteran director and actor Lee Ying as Inspector Lin, Cheng Liu (very short muscle-guy). Chen Hung-Lieh, Chiu Hung (you know him as the Samurai from 5 Fingers of Death), and Wang Kuang-Yu (you've seen him in everything but don't know his name) as the Men of the Dragon School, the monkey king, himself --Chow Lung-Cheng as one of Wen Suchen's two students and Cliff Lok (the future Kung Fu Genius) as the other. For the bad guys they have veteran actor, director and screen writer Tang Ti as Abbot Minkong, and veteran master-villain player Lee Wan-Chung as Governor Wang.  Future star gazing spotted Lily Li, Ku Feng,Yuen Siu-Tin, Little Unicorn, Yuen Wo-Ping, Fung Ngai, and Fan Mei-Sheng.

Fight time and the news is not good. I counted only Five fight scenes plus the assassination attempt on the Imperial Inspector which was very short so I will say five and a half fight scenes. This is really not that bad. It is enough for legit kung fu movie and two of the fight scenes were of a good length so no danger there with boredom. The problem is with the quality of the fights. With the exception of Cliff Lok's solo battle with the guards at Zhaoqing Monastery the fights were very poorly done with the real martial artist looking only slightly skilled and the non-martial artists looking like they had somewhere else to go so "kill me quickly" with the fight extras dying almost before they could have possibly been struck. Why was no fight choreographer used for this movie? I... don't... know. This was a mistake.

This is the first Shaw Brothers movie I am going to not recommend be watched for the entertainment value and certainly not for the fight scenes. The lack of originality in plot and very lazily done fight scenes just will not allow me to do it. However this movie does have a lot going for it. It is certainly well cast and the acting in it is good for its day. Also historically the partial nudity is note worthy and makes it a collector's "must have". So if you buy it, go ahead and keep it in the plastic so it is worth more money.