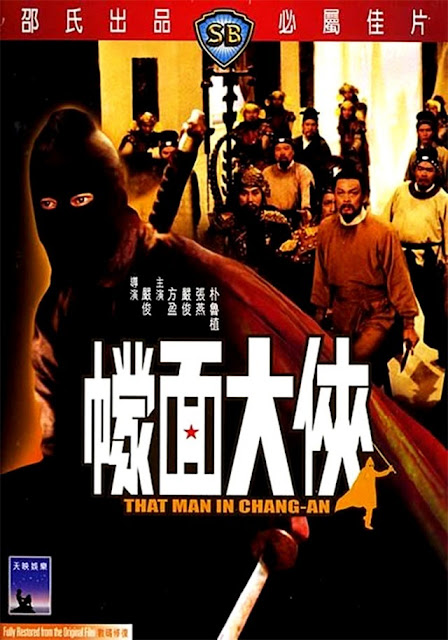 During the Han Dynasty the Empress Lu wanted her nephew General Lu Kun to rule over the neighboring territory of Zhongdu instead of the current ruler King Dai even though King Dai was loved by the Han commoners. She issued an edict calling for King Dai's execution and for General Lu's to take over of the area with the assistance of Imperial troops. It should have been a cake walk as King Dai had no idea the empress had any such intentions but for THAT MAN IN CHANG-AN. A dart throwing vigilante called THE MASKED MANhas followed the courier from the royal palace to General Lu Kun's residence (I guess he was suspicious of Empress Lu and had been spying on her) just in time to assassinate the courier, steal the edict, escape the resident soldiers barge into King Dai's palace past the king's small army and protective guards and warn the King of the conspiracy. Starting to sound ridiculous yet? Don't worry Yi Cheung is not finished with you. Yes, the same script writer that co-scripted COME DRINK WITH ME (1966) came up with THAT MAN IN CHANG-AN. If you decide to see this movie I assure you --you are in for a wild ride!


So, where were we? Oh, yeah --THE MASKED MAN is in King Dai's palace and trying to warn King Dai of Empress Lu's plans to replace him. The King's body guard and trusted general, General Tian Ying immediately calls THE MASKED MAN a liar and tries to kill him and orders the soldiers to attack him (yes, you are right in what you are thinking.) so he hurls the edict with one of his darts at a wall (not to close to the king, mind you) and tells him that it is Empress Lu's edict and is the prove the king needs that The Masked Man was telling the truth. Having warned the king, off he goes. The edict is retrieved by the Queen's sister Princess Wen Yang and as she hands it over to King Dai she suggests they in addition to preparing for the attack at home they also go to Chang-an for help. And wouldn't you know it, just before The Masked Man barged in, the Queen and King were discussing his mother's poor health and how they wanted to find the great doctor and alchemist(!) Zhuang Bai to treat his mother but where could they find him? Princess Wen Yang suggest she go to Chang-An for help under the guise of finding Zhuang Bai for his mother's treatment and while there get help. King Dai agrees to the idea and sends trusted General Tian Ying to accompany the princess and her maiden Hong Er to Chang-An. But...

A funny thing happens on the way to Chang-an. The trusted General Tian Ying is actually a traitor paid off by General Lu Kun to make sure things go his way. So General Tian disables the Princess' chariot and the princess and Hong Er fall over a cliff, only to be saved by this fellow Zhuang Bai, the doctor / alchemist they were looking as part two of their mission. So alls well that ends well but wait --there's more!! Hong Er does not trust this strange fellow (ever though the princess has to hint at her twice to not give him certain information) so Hong Er urge the princess to leave before daybreak and get to Chang-an and get help. But wait, when they get outside it is already daybreak and they end up getting caught again, because yeah, all those soldiers are still out there looking for at least, their bodies. So they get rounded up and taken back to Zhongdu. However even though General Tian helps capture Hong Er, Hong Er never tells Princess Wen Yang General Tian is a traitor because that would mess up a plot device set up for later on. By now everybody in the audience knows That Man in Chang-an, The Masked Man, and Zhuang Bai are the same guy and now he has to go to Zhongdu to save these mistrusting, ungrateful bit --uh royal ladies and still figure out how to save King Dai!

Does the above plot summary sound long to you? You are correct sir, this movie clocks in at a loooooong one hour and fifty-one minutes! And unfortunately the acting talents don't make the time seem any shorter. The actors here seem very unremarkable for a Shaw Brothers movie although to be fair, Fang Ying does do a good job as Princess Wen Yang but the part is so typical royalty so it doesn't help the film as a drama.  In addition, with the exception of Tien Feng (King Dai Liu Heng) and Fan Mei Sheng (Cau Wu Winery waiter) only some of the bit part players are familiar to me. Kim Jin-Kyu is That Man in Chang-an / The Masked Man / Zhuang Bai. and Park Nou-Sik plays General Lu Kun. Allyson Chang Yen is the princess' aide Hong Er and they just don't ring a bell. Please let me be clear, their acting doesn't so much suck as it seems suited to something other than a drama. Yes, I am going to get to that in a minute.

But first, let's get to the fights! I counted 8 fight scenes scattered throughout the movie. For the most part, they are short scenes with the exception of the finale. Unfortunately the one and only one notable fight scene featuredAllyson Chang Yen as Hong Er fighting with double daggers against soldiers with spears as she applied very sophisticate maneuvering and quick-kill counters, I was very impressed with this and yes it did remind me of Cheng Pei Pei work in COME DRINK WITH ME (1967) but without the "dance-ness", just strictly slick but practical self-defense. The other fight scenes were by the numbers "one, two, three -kill" sword fights, rarely more than two attackers at a time no matter how many soldiers entered the scene. Watching this twice in a row was just too funny! The finale's under cranking was so last-minute it just looked weak and experimental and it very well could have been. Not good.

So there you are, probably just like me when I was as I was writing this, waiting for me to recommend you not waste nearly two hours of your time watching this movie when three things start to bother me.  Number one: the "Keystone Cops" chase scene that opened the movie. Not a fight scene mind you, but a camp comedy chase scene where nobody gets hurt and I experienced a little belly laugh. Number two: Kim Jin-Kyu, the actor selected to play the lead actor really comes off as a comedic actor and not a dramatic hero type, things that make me go hmmmm. Number three: the healing scene with Kim Jin-Kyu and Ayllson Chang Yen. This is the funniest thing I have seen in any movie including full blown comedies --coincidence? What if...

I am going to recommend THAT MAN IN CHANG-AN (1967) but only as the first Shaw Brothers WUXIA COMEDY! There are just too many laughs that just can't be unintentional. Yes, all of the principal people involved in the production are past away so they cannot be questioned about it but "the proof is in the pudding". This movie is mad funny. With a little more work and deliberation this movie would have been revolutionary as a wuxia comedy in 1967 but also, so far, far ahead of its time. I don't know if Run Run Shaw would have released it because the risk back then would have been inconceivable. A brand new film genre with a brand new twist would have been just too much to gamble on overtly. Watch it and tell me what you think!