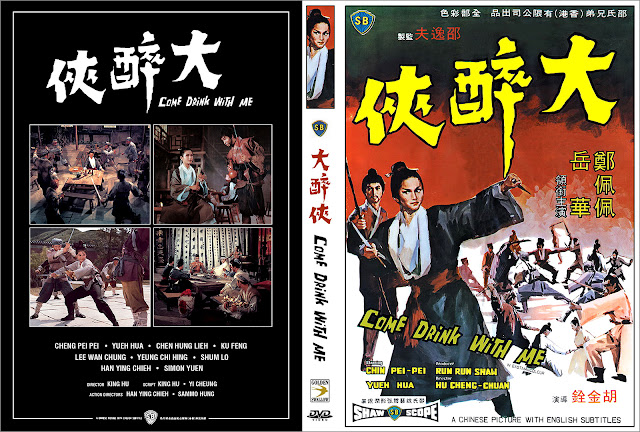 COME DRINK WITH ME (1966)'s actual title is DA ZUI XIA (BIG DRUNKEN HERO) and is based on a Beijing Opera entitled The Drunken Beggar.

In an unnamed province in China during the Ming Dynasty, a ruthless band of bandits have come to power and are terrorizing the local towns. The governor sends armed troops and his special envoy Golden Swallow to deal with the bandits. After a particular battle, the bandits are nearly routed and their leader is captured along with two of the bandits' top commanders. The bandits retaliate by raiding the prisoner procession where the top commanders are being transported and kidnapping the lieutenant general who is also the governor's son. They write a petition to the governor demanding the release of their leader in five days time --or else!

During a battle with the bandits at an inn where she has stopped to rest, a rather scruffy drunken beggar runs into her just as a bandit throws a series of throwing knives at her from the level above them allowing them both to escape unharmed. Later that same night she catches the beggar sneaking into her room but he takes her aback with a request "I can't sleep, let's have a drink." He then steals her knives and hat as she chase him out of her room. Golden Swallow goes after the beggar to retrieve her items but when she returns to her room she catches three of the bandits trying to ambush her in her sleep and she chases them away as well. She then realizes that had she not encounter the drunk beggar she would have indeed have been fast asleep and at the mercy of her attackers.  Who is this drunken beggar ? What is his connection to the bandits? Why does he seem to be helping the Golden Swallow in her mission? These questions are what the rest of "COME DRINK WITH ME" is about.

COME DRINK WITH ME is very definitely a King Hu (he is credited as "King Chuan") production as he both co-wrote the screen play and directed the movie. The talents of his crew and actors have proven themselves in many other projects since but the magic here in the characterizations are undeniably spot on and even in future projects do not recapture the characters as they do here (yes, there is a sequel).

That said, Cheng Pei-pei as the Golden Swallow does an excellent job coming across as a military brat with too much fight and not enough thought. She also does look a bit masculine (make-up and costume staff take a bow) and photos of her in modern dress and made-up surprise me with their gorgeous beauty. Yuen Hua as the drunken beggar is okay but does not deliver a notable performance. Even though I have no reference to draw on of previous depictions, I must say, he never really seems to be quite drunk enough to be disarming and Golden Swallow's martial arts look a bit more lethal than his by comparison. Chan Hung-lit is the Jade Face Tiger and is the villain that eats up the most screen. He plays an intelligent bad-ass and almost makes you want to root for him. Yeung Chi-hing is Abbot Liao Kung. Even though I have only seen four classic Shaw Brothers movies so far, the pattern is a big bad super villain shows up after the movie is half over and he is the one to beat. Yeung Chi-hing plays that super villain but the "super" is unimpressive, to me but fails to spoil the movie. The rest of the villains are just victims for the heroes to go through and are the usual Shaw Brothers cast members some of whom you will recognize.

Ahh yeah, here we go --fight time. I count six fight scenes in COME DRINK WITH ME, pretty evenly distributed through the film. They are not all created equally, however. The first fight scene is the raid on the prisoner's procession and is brutal, cruel but economical with but a few moves to show the viciousness of the bandits.  Golden Swallow's has three fight scenes and they are masterpieces of effective double dagger martial arts and yet have the simplicity of a military designed combat system. "Drunken Cat" ( the name he tells Golden Swallow to call him to the delight of the laughing children) has two fight scenes that work when his martial arts are displayed at the level of master, however when the film tries to depict grand master level skills, the film techniques of the day (1966) just are not convincing enough, I am sorry to say --but I do understand.

The word "classic" is a very over-used word when it comes to old movies but COME DRINK WITH ME (1966) is seen as a classic unanimously by critics and "fu-fans" alike. Far from being a perfect movie what gets everyone excited about seeing this movie is its ability to draw out the hero in all of us knowing we too would rise to the challenge should a loved one of ours be threaten by arrogant thugs. COME DRINK WITH ME is absolutely a must-see!