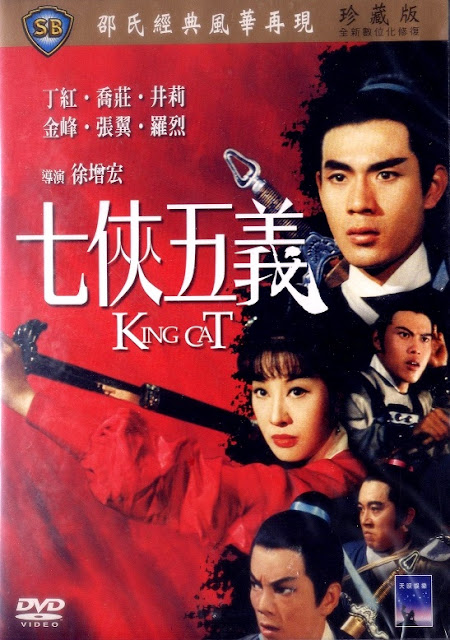 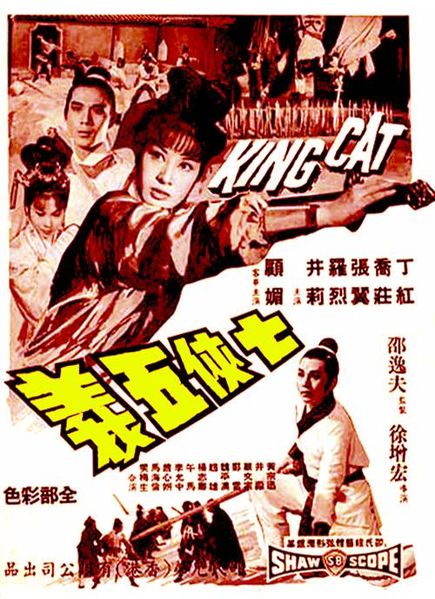 The Seven Heroes and The Five Gallants is a novel written during the late Qing Dynasty that combined two genres: crime mystery (goon'an) and swordplay (wuxia). The characters in the title would assist one, Judge Bao Zheng, called "Black-faced Zheng for his unwavering dispensing of justice. The stories take place during the Song Dynasty known for it corrupt officials and the hopelessly downtrodden citizens of China at that time. Shaw Brothers made three (3) movies using the characters from this very popular novel and although they are not sequels I will review them consecutively because I can avoid writing the details of the characters three separate times in this way. The first review will be of KING CAT (1967) produced by Sir Run Run Shaw, directed by Chui Chang Wang and written by Ting Shan-Hsi (his first screenplay).

In this adaptation we begin as Judge Bao Zheng (aka black-face Bao Zheng because in in addition to be dark-skinned, the color black in Chinese Opera represents rough and bold or impartial and selflessness of character) beheads a relative of the Grand Tutor for embezzlement. The Grand Tutor learns of this but already has a political assassination plot for the emperor's younger sister in play involving Hua Chong (aka The Variegated Butterfly) his regular henchman, so he sends in the three Xiang Brothers to assassinate Bao Zheng. South HeroZhan Zhao suddenly rescues Bao Zheng from the attempted assassination and is then asked by Judge Bao to come stand guard with him over the emperor who is traveling out of the palace to view a lantern celebration. During the lantern viewing Zhan Zhao rescues the emperor's younger sister --twice and scales a wall to return her to the viewing balcony. This prompts the emperor to grant Zhan Zhao an official title of Imperial Cat as a reward.

When word of this gets around to the Five Gallants also known as the Famous Five Rats (or Mice) of Xiankong Island , none of them seem too concerned about it accept Rat number 5: Bai Yutang aka Brocaded Rat. When he hears of the events by the Ding Brothers of the Seven Heroes, he is offended by the title of "Cat" since he is a "Rat" and goes to the capital to challenge Zhan Zhao. The eldest Rat, Lu Feng (aka Skyward Rat) dispatches the 3 other Rats ( Rat number 2: Han Zhang, aka Underground Rat,  Rat number 3: Xu Qing aka Mountain Rat and Rat number 4: Jiang Ping aka Underwater Rat) to return Bai Yutang to the island before he makes any trouble but when they catch up to him in Bianjing they experience an insult and are swayed into helping him. The four of them decide to steal an item from the emperor's palace counting on the emperor to give the case to Judge Bao Zheng and on Judge Bao Zheng to ask Zhan Zhao for help and they hope to embarrass him and ensure their reputation as superior to his. What they don't count on is the hideous character of Hua Chong to bring into question whether or not Bai Yutang can rape and murder.

As this is a famous novel with literally hundreds of sequels and imitations naturally, this is an all-star cast production. Chang Yi is once again the star and once again he does not seem comfortable at all as the hero but, this time,  I think it is suitable for the character. Zhan Zhao wants no part of this official stuff and just does what any hero would do and then wants to move on. His character opposite is Bai Yutang and playing him is Kiu Chong who to my surprise just eats up the screen in this role, bravo! Kiu Chong is superb as the fancy-dan swordsman who won't be outdone by anyone and certainly not some official named "Imperial Cat"! The rivalry here is depicted in a very logical manner and even though Bai Yutang is supposed to be the unreasonable one, his emotions and subsequent actions make sense especially for the time (Song Dynasty).

Speaking of great acting: watching Lo Lieh go back and forth as the hero and villain in these past few movies gives one a qualified opinion of how talented this actor really is. The character Hua Chong is the typical Song Dynasty official who can't possible conceive of  his actions as anything but justified as they are all self-serving actions. Lo Lieh is careful not to over-do his portrayal of this villain and create an evil caricature but just plays him as a man going about his evilness in a pathological, devil may care calmness, again, bravo!. Honorable Mention: There are so many stars here that I know that I am just going to miss someone so I won't even try but I must mention these guys: Liu Chia-Liang, Liu Chia-Yung, Tang Chia, Wu Ma, and Clif Lok.

FIGHT TIME: Once again here we are, the reason why I am living and wait, what is this --no fight choreographer credited? But, but I see Liu Chia-Liang andTang Chia right there, in fact they are in the very first fight. Okay, okay I am being a bit facetious. Although they are not credited their presence in the movie means they worked on it and it shows. I counted eight (8) fight scenes which qualifies this movie as action-packed and it is well choreographed with even some stunt doubling to boot. The quality of the techniques is above average and the shining star this time is Kiu Chong, can you believe it!? I remember calling him out in THE KNIGHT OF KNIGHTS (1966) review for his lack of fighting ability but here, not only are his skills improved but they are character appropriate, so kudos to Mr. Kiu Chong for being the stand out in this ensemble production and Masters Liu Chia-Liang and Tang Chia for putting it together.

With this movie the experienced team of Liu Chia-Liang and Tang Chia raised the bar by adding some acrobatics to the sword-play and with a well-known and extremely popular story line there was no way for this one to disappoint. The new wuxia genre was here to stay and was only going to get better. To be brutally honest there is still some 1950's ambiance on the movie but KING CAT (1967)does feel like it is moving forward in film history and I whole-heartedly recommend you see it and buy it if you are a collector. We will continue with the adaptations ofTHE SEVEN HEROES AND THE FIVE GALLANTS in our next review. See you then. 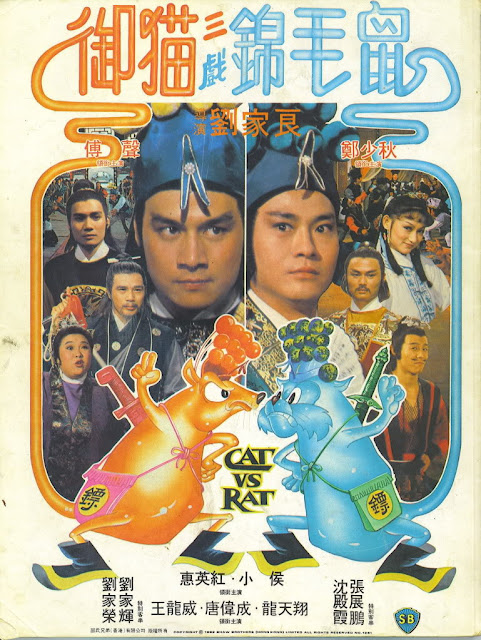