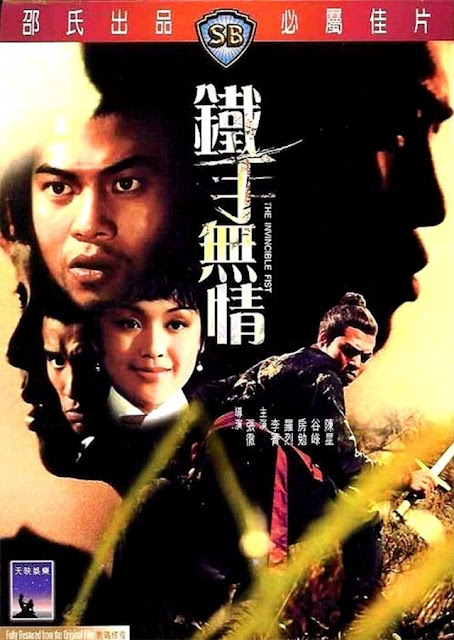 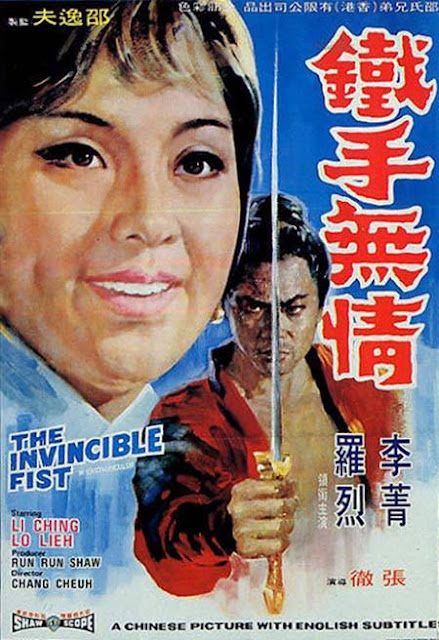 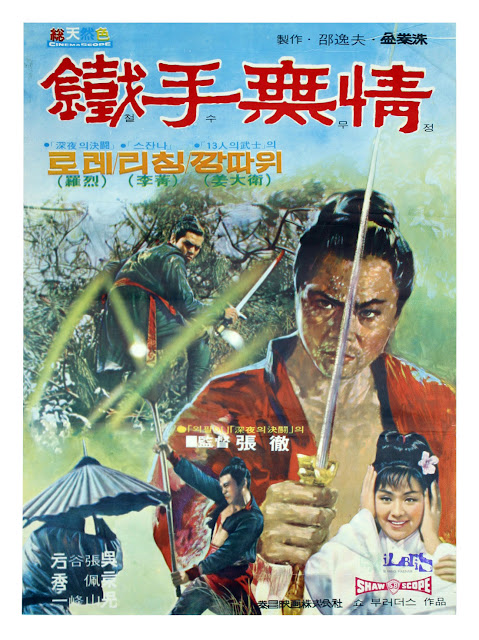 Our next movie in 1969 is once again a Sir Run Run Shaw produced, Chang Cheh directed pursuit film but this time the script is by popular wuxia novelist I Kuang and the criminals are the ones on the run. THE INVINCIBLE FIST (1969) is once again action directed by the team of Tang Chia and Liu Chia-Liang. In spite of the similarities on paper these two movies clearly show how much more skilled all of the people involved making these movies became by comparing, the also released in 1969, THE FLYING DAGGER to it. Although they were both released in 1969, THE FLYING DAGGER is clearly the older work and THE INVINCIBLE FIST is clearly the superior product (in my opinion). Let's get busy!

There is a robbery and slaughter at the Gung Bai Wan Residence. Thousands in gold taels are stolen and every single member of the residence, including the servants are murdered. The only clue is a horse drawn cart with several masked men on it, seen leaving the general area. The provincial bounty hunter, Master Tien Wu Ching of Tsang Chou also known as The Invincible Fist is in pursuit of the unknown number of villains. With him is his little brother Tieh Er Long, his four assistants known as The Four Little Iron Men and a small squad of deputies. THE INVINCIBLE FIST (1969) is the action-packed telling of a group of heroes determined to capture an equally determined group of villains that will not only resist capture but also identification!

THE INVINCIBLE FIST (1969) has a fantastic cast of skilled actors that do a great job of story telling. Li Ching is Kuei Ku and she captures the essences of being lonely that is only magnified by the handicap of blindness. Fang Mian is Ma Wai-Jia filled with the good intentions of a loving father whose daughter's blindness must make him a very desperate man who must face everyday the one thing he cannot give to his only child. Lo Lieh is Tien Wu-Ching, the Invincible Fist, master bounty hunter who can never show compassion to the killers he must hunt down and very often kill for the sake of the common people that count on him for their safety. David Chiang (in his first co-starring role) is Tieh Er-Long, the dutiful younger brother devoted to his older brother even to the extent of his own life.

FIGHT TIME: The action direction team of Tang Chia and Liu Chia-Liang are back for THE INVINCIBLE FIST (1969) and right of the bat I noticed two things: number one, neither one of the directors is in front of the camera for their usual cameo on this project as they usually are but that is fine, it does not effect the movie at all. Number two, there are nearly twice as many action scenes as there have been in past movies. I counted nine (9) fight scenes that makes this an unquestionably action packed movie (for people that like that sort of thing). I got the impression that Chang Cheh and his crew were trying to make a statement about the direction they want to take this relatively new genre of wuxia. The action is very clean and easy to follow, there is some camera movement but it is NOT the dreaded "shaky-cam" that I hate so much. Give me more movies like this, please!


HONORABLE MENTION: The casting of this movie really helps sell the story and the fighting styles of the individuals. Excellent selection of actors.

THE INVINCIBLE FIST (1969) starts off fast and the action keeps coming but there is no shortage of story in this movie. It is certainly the type of movie that could form film study courses in college about the techniques of the masters (Chang Cheh, I Kuang, Tang Chia and Liu Chia-Liang) and can still go head to head with any popcorn / guilty pleasure flick of its day. So certainly it is getting a very enthusiastic "don't miss" for all movie goers and collectors alike from yours truly. See you next time!