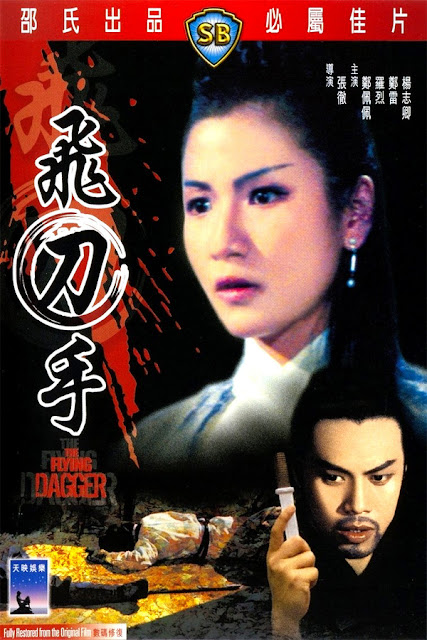 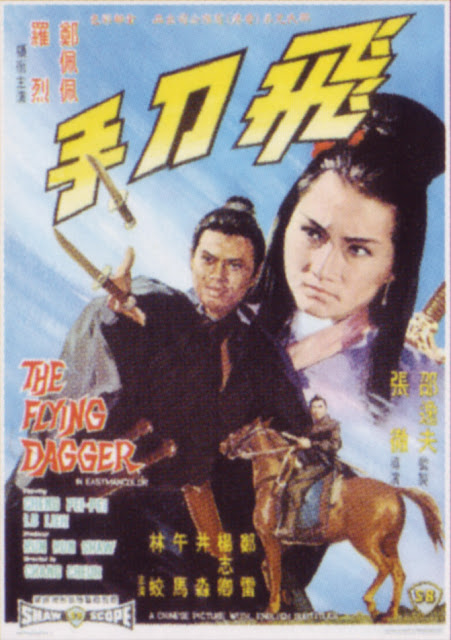 Ladies and gentlemen, the man himself is back, the great Sir Run Run Shaw produces from the "throw back" vault (hence the black and white opening) his trusted director Chang Cheh who writes the script with pal Lee Chi-Sin as they all watch action director team Tang Chia and Liu Chia-Liang slash together the classic film THE FLYING DAGGER (1969). And if you had as much fun reading the preceding bit as I had writing it we might be blood related, let's get busy!

Did you ever have a thought to do something that, while you were thinking it, seemed like a great idea at the time. So you did it. And then, all of this crap comes down after it and you realize you really didn't think it through? You too, huh? Cool, so Yu Ying of the Qiankun Sword Clan (who just happens to be the  daughter of the clan's chief) decides to kill the son of the Green Dragon Clan's Chief who just happens to be Jiao Lei the Flying Dagger...oops! Never mind that his son was a killing, raping and then killing again type of a son-of-a-gun. Parents just don't see their children in that kind of light.

Chief of the Green Dragon Clan, Jiao Lei the Flying Dagger gets all mad and revengey and starts killing everybody just to get to Yu Ying and for good measure clearly intends to kill her father, Yu Yuan, Chief of the Qiankun Sword Clan as well. So, after killing the legendary Luo Tong and Song Jingang and his four sons, while killing the Song's servants and children a real badass guy shows up with a similar skill set as The Flying Dagger. His name? Yang Qing, badass, mystery man extraodinaire. Ready, set --begin story!

THE FLYING DAGGER (1969) stars Cheng Pei Pei as Yu Ying the well intentioned pursued damsel of our story. Yeung Chi-Hing is the revengey pursuer and father Jiao Lei the Flying Dagger, the mad cap murderer. Lo Lieh is Mr. Badass extraordinaire man of mystery who sometimes seems to help and other times not so much.
HONORABLE MENTION: There are a lot of recognizable faces here: Cheng Miu as Yu Yuan the father of the pursued, Ku Feng as Song Jingang, and even Liu Chia-Liang, Cliff Lok, David Chiang Dai-Wei and Liu Chia-Yung have small cameos.

FIGHT TIME: The incredible action direction team of Tang Chia and Liu Chia-Liang are responsible for what action we see here as I counted six (6) fight scenes including the rather tame finale. Everybody's fight scenes are well done but I would have liked a bit more in the way of technique in the scenes. However, I found in my research that THE FLYING DAGGER (1969) was actually filmed years earlier and its released delayed but no reason for the delay was given. This helps me to be a bit more forgiving of the relatively sedate nature of the fights as the truth of the matter is we could always use "more".
HONORABLE MENTION: none

THE FLYING DAGGER (1969) at its core is a straight forward pursuit film. It is due to the talents of its co-writers Chang Cheh and Lee Chi-Sin through characterization that we hold our interest throughout the film. In addition, if the film had been released years earlier then I certainly would be making a bigger deal of the use of the Jiang Hu Chivalry and male dominate subplot which at this point (1969) we have already seen at least a couple of times already. That said, I certainly enjoyed THE FLYING DAGGER (1969) and wholly recommend it to viewers and complete collectors alike. See you next time!