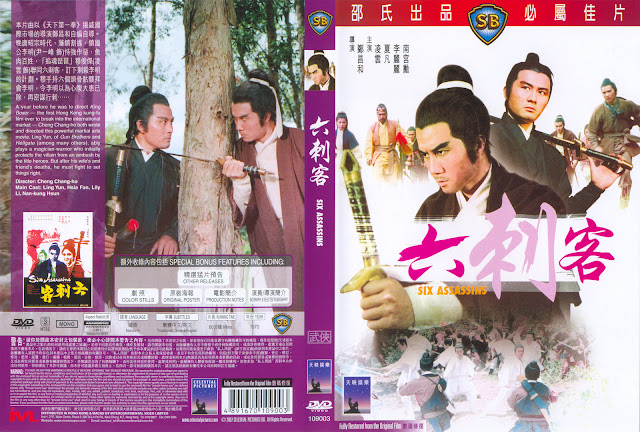 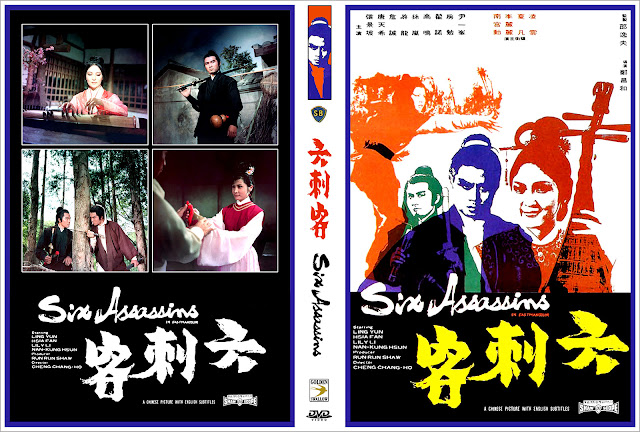 SIX ASSASSINS (1971) released March 25th, was written and directed by Walter Chung Chang-Hwa produced by Shin Sang-Ok and Sir Run Run Shaw. Shot in Taiwan, it is a twist of THE MAGNIFICENT 7 with a splash of  CHUSHINGURA: THE 47 RONIN, wuxia movie! Let's get busy.

Lord Zheng Guo Li Ming is a feudal lord and land owner but most importantly he is the emperor's brother. Unfortunately Lord Li Ming is also a tyrant and his treatment of his servants have them running to the neighboring estate, the estate of Lord Zheng Shou Zhen Ding Yuan.

Lord Li Ming refuses to accept this defiance from lowly peasants and personally travels to the Ding Yuan estate to confront one such family and robs and murders them. He then orders the boundary marker to be moved to expand his estate but Lord Ding Yuan arrives to confront him and demands he move the marker back and leave his land. This enrages the emperor's brother and he murders Lord Ding Yuan right on the spot. As Lord Ding Yuan lies dying though, he orders his men to not do anything.

Minister Ruan Yi-Cheng's real intention for the one month delay is to plan and execute the assassination of the emperor's brother hoping that with his brother dead, the emperor  would withdraw the edit and allow Lord Ding Yuan's son to keep his inheritance. To this cause, he has enlisted the help of Hero Mu Jun-Jie to help with the planning because the murder must not take place on either lord's estate for it to work. Adding further to the danger is not only Lord Li Ming's two personal body guards but his protector is none other than Captain of the Imperial Guard, Qiu Zhang-Sheng! Ladies and gentlemen -- get your popcorn ready!

FIGHT TIME: SIX ASSASSINS (1971) is credited by HKMD (Hong Kong Movie Database) as directed by Walter Chung Chang-Hwa with no credit given to any action director. I must say, under these circumstances, the action is top notch and state of the art for 1971.  The techniques are clear, easy to follow, realistic and entertaining. Each participant has their own flavor about their fight style and I am hard to imagine anyone being disappointed with the five (5) actions scenes I counted. This is not action-packed, but never-the-less, the movie is still well paced. There are both weapons and empty handed combat on display. Well done!

HONORABLE MENTION: James Nam Gung-Fan's fight scenes are very flashy and suitable for his character which is a parallel to Robert Vaughn's character from the Magnificent Seven.

RECOMMENDATION: SIX ASSASSINS (1971) is a nice eastern western romp for any slow Saturday afternoon when one has a touch of kung fu fever that needs a fix. In addition it is collectible as the character actor, Chan Shen's first movie. He is well used in almost every classic Shaw Brother's movie whether action or comedy. Well, that's my review, see you next time!