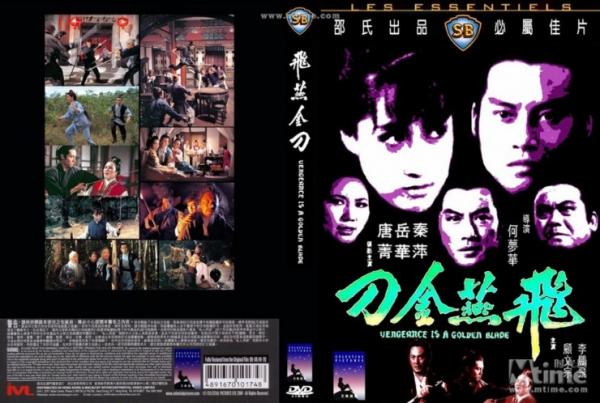 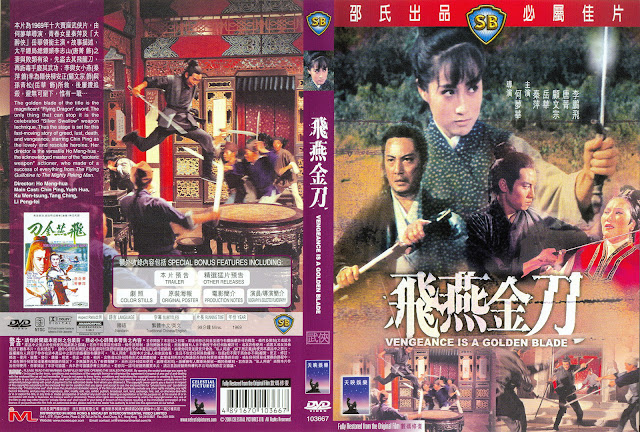 VENGEANCE IS A GOLDEN BLADE (1969) is a movie totally worthy of a remake with the only improvement necessary being the martial arts choreography. The original production was done by Sir Run Run Shaw, himself. The Maury Povich / Jerry Springer type story was written by Tu Yun-Chih and Ho Meng-Hua and is directed by Ho Meng-Hua. Let's get busy.

Li Zhishan returns home to an ambush by a rival security escort service. Long Zhentian and his brothers robbed their own charge and were discovered and thereby went out of business. They blame Li Zhishan and his Golden Dragon Blade escort service and go after him for "revenge". With Li Zhishan wife's, Yuexiang help (yes, you read that correctly) they succeed in stealing the Golden Dragon Blade, wounding him seriously enough to ruin his kung fu and they run him out of his own home. It is only with the help of his faithful servant Li Sheng that he and his toddler daughter, Li Xiaoyan escape and go on the run. But Long Zhentian and his brothers are not satisfied. They want Li Zhishan killed dead and will not rest until it is so.

VENGEANCE IS A GOLDEN BLADE (1969) is brilliantly casted with Li Zhishan embodied by the sorrowful Tang Ching. Long Zhentian is played by the questionable Lee Pang-Fei. Mrs. Li Yuexiang is played with the proper sense of entitlement by veteran actress / director / producer Kao Pao-Shu. Li Sheng the faithful servant is fittingly played by Pang Pang and Li Xiaoyan is the all grown up fiercely loyal daughter by Chin Ping.


HONORABLE MENTION: Yueh Hua and Ku Wen-Chung play a pair that is a grandson and grandfather and Sammo Hung Kam-Bo is an extra in two different scenes as two different people.

FIGHT TIME: VENGEANCE IS A GOLDEN BLADE (1969) is directed by Ho Meng-Hua the veteran director who, this time out, did not use a action choreographer and unfortunately it shows in some of the action. Nevertheless the action is only a bit flawed and is totally acceptable for the time period. I counted nine (9) fight scenes in this action-packed movie but you watch this one for the story.

One of the most difficult reviews to write is one where the story is jaw-dropping at some point and you are dying to discuss it with someone but you have to write the review assuming your audience has not seen the movie and you certainly do not want to spoil it for them. VENGEANCE IS A GOLDEN BLADE (1969) is one such movie. The wife says something at the beginning of the movie and you immediately thing of her in one way. After you have watched the movie, having thought no more about the statement she made, you go "oooohh, that what she meant" and suddenly she becomes a very different and perhaps a little more interesting character if not more sympathetic. I absolutely recommend VENGEANCE IS A GOLDEN BLADE (1969) for all audiences and collectors, see you next time!