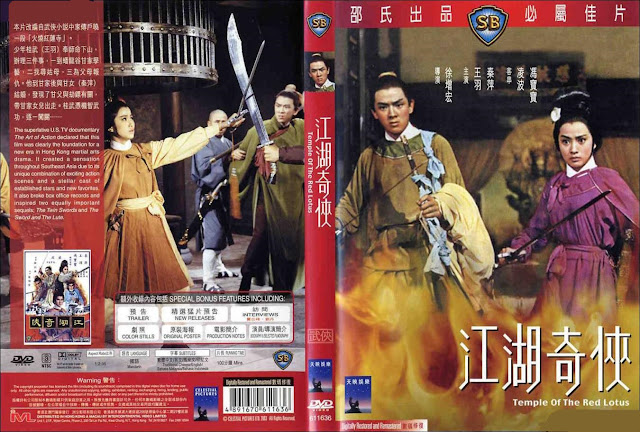 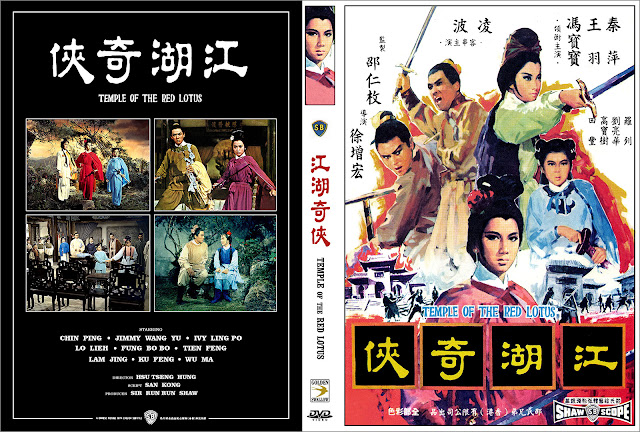 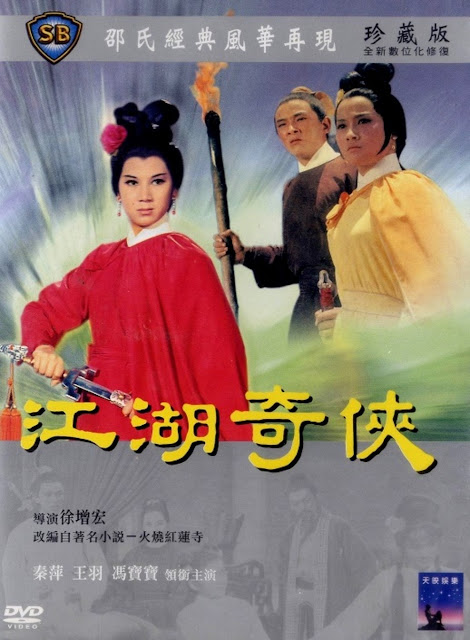 Released on October 1st, 1965, TEMPLE OF THE RED LOTUS (1965) was produced by Sir Run Run Shaw and was the first movie that showcased wuxia themes and action without being encased in Chinese Opera. The script was written by San Kong based on a series of wuxia stories written by Ping Jiang Bu Xiao Sheng called Jiang Hu Qi Xia Chuan (Shang Xia). Unfortunately not much else is available on the author or his series in English. The movie adaptation was directed by Hsu Tseng-Hung, a long time cinematographer, TEMPLE OF THE RED LOTUS (1965) was the first time Mr. Hsu directed a movie! There is no action director or choreographer credited for this movie. Let’s get busy!

Central to the story of TEMPLE OF THE RED LOTUS (1965) is the Jin (Gan) family Castle located in Dragon Valley and the “knights” of Jin Family that are known for bringing justice to others in the Jiang Hu even if it means challenging other martial artists. A young warrior (Gui Xiao Wu) with a military background has been betrothed to the Jin family and on his way to reunite with his bride-to-be stumbles upon an escort caravan being attacked by masked armed warriors.

Gui Xiao Wu decides to get involved and defend the escort caravan. He is injured and knocked unconscious for his trouble by the masked attackers. When he wakes up, he discovers the great swordswoman; the Scarlet Maiden has treated his wound and they become acquainted.

The Scarlet Maid seems very concerned with Gui Xiao Wu and advises him to stay focused on training to revenge his parents and go to Jin Castle to improve his kung fu. She tells him how to get to Dragon Valley and Jin Castle and sends him on his way. After Gui Xiao Wu gets to Jin Castle, in the middle of the night, the monks of the Temple of the Red Lotus attack Jin Castle.  After the battle, Gui Xiao Wu believes he knows the identity of the masked robbers, --the very family he is to be wed into! What is he going to do, now?!

CAST REPORT: Sir Run Run Shaw assembled an all-star cast of some of the greatest actors Shaw Brother Studios had to offer!

FIGHT TIME: TEMPLE OF THE RED LOTUS (1965) has no action director credited. I counted five (5) fight scenes including the big finale at The White Dove Convent. There is almost no empty-handed combat. All combatants excel in throwing projectiles but it is particularly a specialty of the Jin Family. The fights at Jin Castle are the main battles of the movie. The Yuan-Yang Sword technique is a featured sword style that is very powerful but the young couple has yet to master it.

Now, let's talk about the kung fu, because, let's face it, it is why I started watching these movies and got hooked on Shaw Brothers in the first place. I remember in the 1980's when wushu in America first became a big thing and there was a lot of discussion on what was the difference was between "kung fu" and "wushu" techniques. Well, as I am currently watching "The Journey of Flower" a Chinese drama from Chinese television on Youtube, the answer would be to watch any pair of fights one from " The Journey of Flower" and one from "Temple of The Red Lotus" and it would be obvious as to what the difference was, although to express it in words still might prove challenging. The words that came to mind as I watch the fights in Temple of The Red Lotus were "raw" and "realistic". The techniques displayed in Temple of The Red Lotus were also "to the point" and very practical. I really appreciated that even though I also like the fancy stuff as well. There is very little flailing and waving arms and weapons about pointlessly. The martial arts here are definitely worth looking at and every so once in a while someone throws in a nice stance. As far as the amount of action, I am going to say that five fight scenes is a fair amount of action and will use five battles as the standard by which to judge the amount of action in future movies.

HONORABLE MENTION: Jimmy Wang Yu shows off his athleticism and seems skilled in martial arts. (Lo Lieh, not so much.) Chin Ping also does a good job when performing her stunts although she is still occasionally stunt doubled. The casting here is very balanced between male and female.


RECOMMENDATION: TEMPLE OF THE RED LOTUS (1965) is a great adaptation than makes me want to read the novel and learn more about The Scarlet Maiden and her previous adventures. But, as I said earlier, the novels are not available in English. These are all interesting characters and in addition to being a historical collector’s item, I recommend this movie because the story and action are worth-while, for any viewers of martial arts movies. I honestly did not think I would enjoy this movie because of its age. If the rest of the movies are this good then I can be very excited about all the work ahead of me. See you next time!