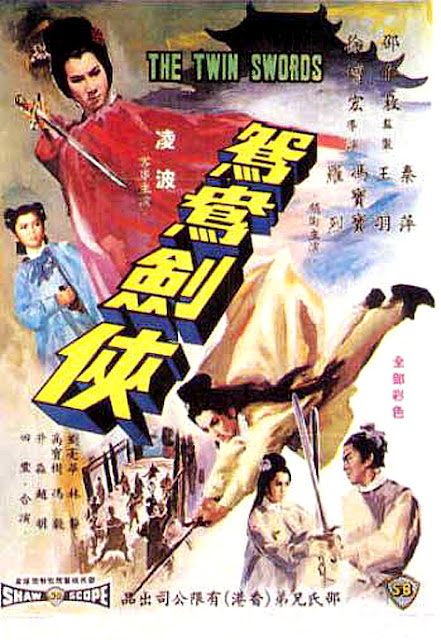 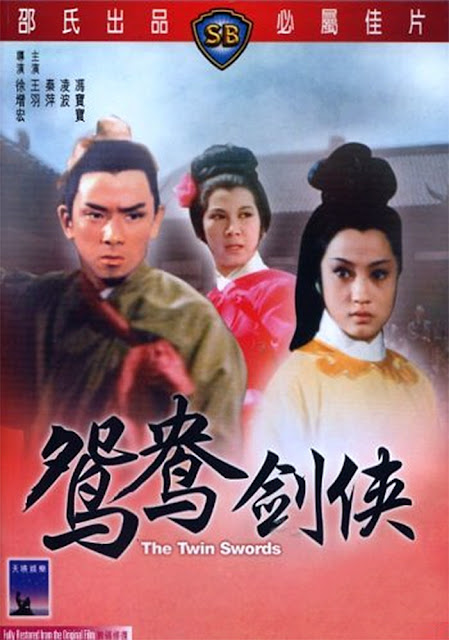 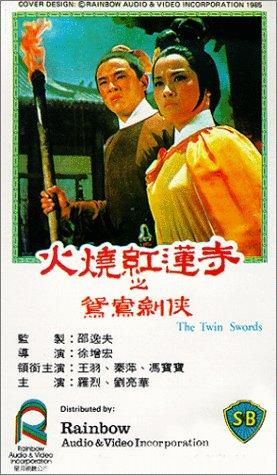 Released December 22nd, 1965,  THE TWIN SWORDS (1965) was the sequel and continuation of the story started in TEMPLE OF THE RED LOTUS (1965) an adaptation of the novel, Jiang Hu Qi Xia Chuan (Shang Xia) written by Ping Jiang Bu Xiao Sheng. San Kong repeated his duties as the scriptwriter and Hsu Tseng-Hung returns as director but the elder Shaw brother, Runme Shaw is the producer this time out. Also once again there is no action director or choreographer credited. So, let’s get busy!

We last left our newly wed couple after they were aided in their escape by The Scarlet Maiden from The White Dove Convent (where the evil Red Lotus Clan had their kidnapping and forced prostitution base of operations). The Scarlet Maiden instructed them to “mind their own business” and return to the Gan Family Fortress, practice their kung fu and for Gui Xiao Wu to focus on avenging his parents. Lian Zhu and Xiao Wu headed back to the fortress and had only traveled a short way when they witnessed an apparent kidnapping of four women. It looked very much like the work of The Red Lotus Clan.

Lian Zhu immediately lunges forward to save the women but Xiao Wu pulls her back. Not only does he want to heed the words of the Scarlet Maiden but he still feels remorse because all that has befallen them has been because of his poor judgment, if only he had minded his own business then they would have never left the Gan Fortress. [See TEMPLE OF THE RED LOTUS(1965) for details] But what husband can resists his wife’s pleadings? Lian Zhu convinces him that rescuing people is not minding someone else’s business and she knows they must be heading to the Red Lotus Temple. So “just this once” they go off to rescue the women.

But, wouldn’t you know it? It’s a trap and Lian Zhu is captured! Xiao Wu has no choice but to return to the Gan Fortress and face the family that now views him as a traitor and beg them to help him rescue the daughter he caused to be endangered. And as if that weren’t enough, The Red Lotus Temple monks will be prepared for their attack, the danger and risk is obvious yet, how can they not go? Prepared to be rocked by a 1965 state of the art blockbuster!

FIGHT TIME: Just as in Temple of The Red Lotus, THE TWIN SWORDS has no fight choreographer credited. I counted eight fight scenes once you allow for the first four and a half minutes of THE TWIN SWORDS, which is actually the last four and a half minutes of Temple of The Red Lotus. This is nearly twice the amount of action as the previous movie! The quality of the fight scenes are upheld in the sequel with the techniques displayed being realistic and to the point with no flailing about of the arms and weapons to simulate action. (The sole departing from realistic martial arts comes when the two grand masters go at it head to head in the finale. My instinct tells me to not make too much of this because the creators are in totally uncharted territory here and still managed to express their ideas.  So I decided to give it a pass. )


HONORABLE MENTION: Chin Ping has a solo performance against the entire Red Lotus gang and puts her heart and soul into it! Unlike the first movie, I could not spot a single substitution of a stunt double during this entire fight and I even caught a moment when her sword bent from her putting all her strength into her techniques! Bravo!


RECOMMENDATION: THE TWIN SWORDS (1965) is only the second movie in our journey of the early Shaw Brothers wuxia classics and the standard is already very high. This two-part adaptation of Jiang Hu Qi Xia Chuan (Shang Xia) [TEMPLE OF THE RED LOTUS being the first part] is fantastic and I can easily recommend this classic for collectors and casual viewers of martial art movies alike. The story and the action both hold up even fifty years later, see you next time!