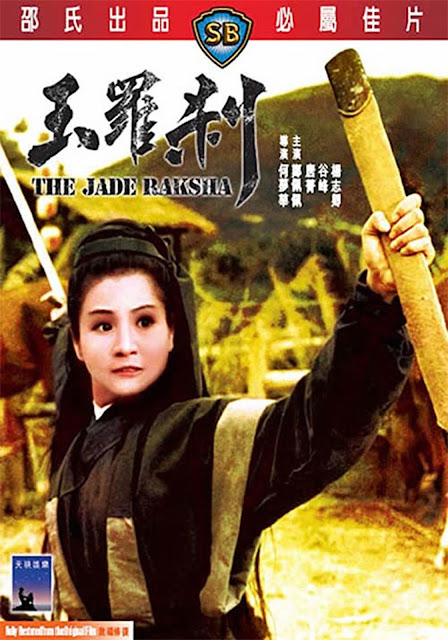 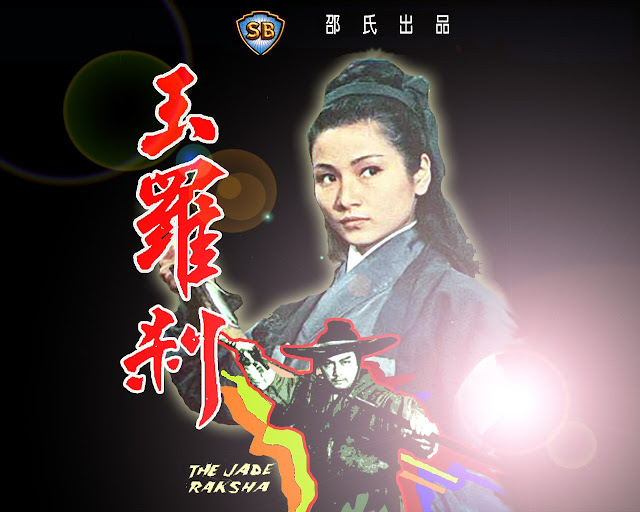 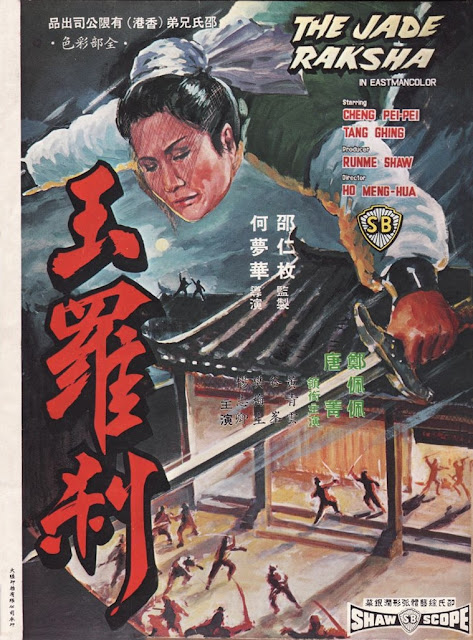 HO MENG-HUA co-writes (with YIP YAT-FONG) and directs THE JADE RAKSHA (1968),  a unique wuxia tale that asks the question: "When is revenge, justice and when is it not?" Produced by RUNME SHAW this film has plenty of action but no action director is credited. Let's look at the plot.

The wail of The Jade Raksha is a song of the hell spawn demon-woman  promising the wicked that they will not go unpunished for their crimes against heaven. If you are evil, you know this song spells your doom.

Leng Qiu Han is The Jade Raksha. When she was a child, one of the 20 Yan Clan masters killed her whole family -- but her problem is, she does not know which one. Her solution is simple: kill them all.

For 6 months Xu Ying Hao has been traveling the Jiang Hu searching for one Shi Yong San, the man his mother told him murdered his father twenty years ago. Along his travels he hears about The Jade Raksha who has been killing the heads of the Yan Clan and hanging their heads up in the various village squares where the individual Yans lived. Xu Ying Hao feels this is too cruel and extreme for it to be justice. The Jade Raksha should restrict her killing to the individual responsible for a specific wrong doing. And so, even though the matter has nothing to do with him, Xu Ying Hao feels he must get involved and confront The Jade Raksha. This is their story.

FIGHT TIME: THE JADE RAKSHA (1968) has no credited action director but its fights are easy to follow, although a little wild. They are very much par for 1968 and so are pretty cool to watch. I counted four (4) full fight scenes plus some small skirmishes so there is no shortage of action.


HONORABLE MENTION: Sammo Hung Kam-Bo and James Tien have roles as stuntmen in this movie. I actually found James Tien by accident (!) while looking for Sammo as James Tien is not credited but I think you will agree after seeing the screen shot it is definitely him.

THE JADE RAKSHA (1968) is a unique wuxia tale because it is not a story about a revenge but is a story about revenge told through the eyes of two people, both seeking revenge and showing how it affects their lives, their loved ones and the lives of the people they seek to take revenge on . I have deliberately told very little of the story (except for the details of Leng Qiu Han which I looked for it but it just wasn't there) because it is a well crafted story that builds on its parts and it is worth your time to see it for yourself.
I absolutely recommend THE JADE RAKSHA (1968) for all viewers and collectors of all ages! See you next time!