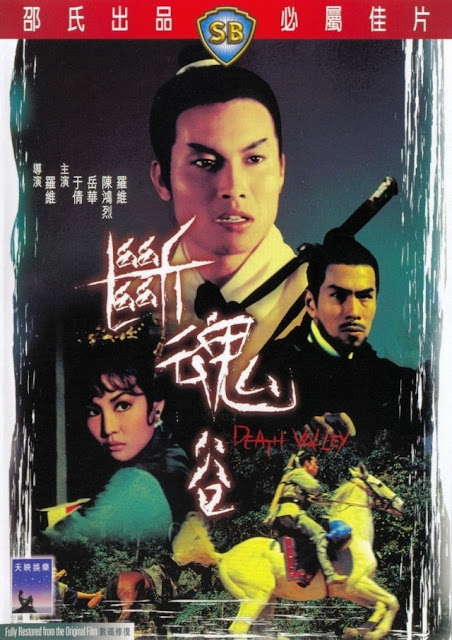 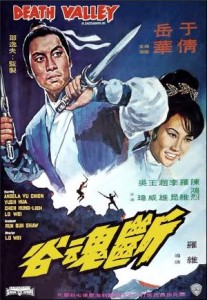 Sir Run Run Shaw brings back writer/director Lo Wei fresh off his hit film BLACK BUTTERFLY (1968) and Lo Wei delivers DEATH VALLEY (1968) a twisted tale of ambition filled with interesting characters. Han Ying-Chieh spices up the drama as the action choreographer his previous work for Shaw Brothers being COME DRINK WITH ME (1966) also as action choreographer. Let's check out the plot.

Chiu Jien Ying has lived in Chiu Mansion located in Death Valley with her uncle Master Chiu and his students. Even though she is not the best martial artist there (that honor goes to Master Chiu's body guard, Lau Yuen Hawk) she is still the most senior and so, even though she is female, she had reasoned that her uncle, as he was getting on in his years, would eventually leave all his assets to her, being the only blood relative living in the mansion.

Unfortunately Master Chiu has sent for his nephew, Chiu Yu Lung, to "take over his affairs" and has no intention of turning over anything to Chiu Jien Ying, as she is "after all a girl". Shortly after having this conversation with her uncle Jien Ying persuades her lover and classmate Lam Hung to go along with her assassination plot involving Lau Yuen Hawk, her uncle's body guard. When Lam Hung voices misgivings about trusting such a skilled martial artist with this plan she tells Lam "Let me handle him" What Jien Ying has in mind is to handle yet another man in her life, her childhood friend Jin Fu, a famous swordsman known as "The Cold-faced Master", and the owner of an equally famous sword. Handling all of these men is how Chiu Jien Ying plans to get what she wants.

Chiu Yu Lung is headed to Chiu Mansion in Death Valley to help his Uncle settle his affairs as his uncle, Master Liu is getting on in years. On his way there Yu Lung has several chance meetings with thugs, cheats, an impressionable young man and a master swordsman named Jin Fu. In cementing his friendship with Jin Fu, Yu Lung exchanges weapons with him because, in part, of Jin Fu's gratitude for Yu Lung saving Jin Fu's life from an ambush. This sword Yu Lung receives from Jin Fu returns Yu Lung's favor by causing a case of mistaken identity that allows Yu Lung to discover Jien Ying's plot to take his life. From here it gets verrry interesting.

Angela Yu Chien is cast as the star of our show, Chiu Jien Ying a "girl" wronged or no? You decide. Yueh Hua is Chiu Yu Lung a very, very, very lucky man. Chen Hung-Lieh is Jin Fu a "heroic" swordsman to whom killing is not a problem. Chen Hung-Lieh is perfectly cast as "The Cold-faced Master, we rarely see Chen Hung-Lieh cast as a good guy.

FIGHT TIME: Han Ying-Chieh is the action director for DEATH VALLEY (1968) I think we all remember him as the "why did you kill my teacher" guy in CHINESE CONNECTION (1972) and I sort of forgot he was also an action director. His choreography is not bad if you can understand what I mean by, wild but still detailed. There is also some under-cranking in spots but over-all he is "par for the course" in terms of 60's action scenes. I counted seven (7) fight scenes in a very interesting movie that is thoroughly enjoyable. Nothing to be disappointed about.


HONORABLE MENTION: You can spot SAMMO HUNG KAM-BO as a stuntman in the early part of the film. Yes, I included a screenshot.

DEATH VALLEY (1968) is a very entertaining production and I don't who is responsible for the cheese cake or as it is called in anime circles fan-service but I can't say it didn't add to the main plot of the film. I mean, I don't know about murder, but I certainly would be "motivated" to cooperate with her on a "special project". So, yes I am wholly recommending DEATH VALLEY (1968) for viewing by fans and collectors alike! See you next time!