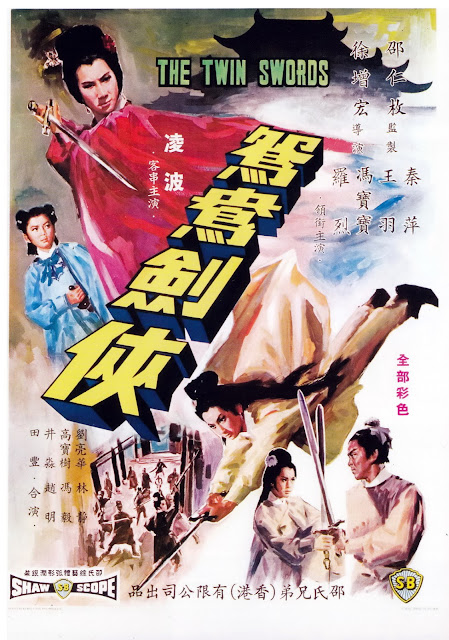 THE TWIN SWORDS (1965) is the seamless sequel to TEMPLE OF THE RED LOTUS (1965) and starts off with the last 4 1/2 minutes of the action-packed finale of its predecessor where the Red Lady saves the day with a handful of well placed red darts.

After the young couple are rescued by the Red Lady (Ivy Ling Po) only in this sequel she is now called "The Scarlet Maid", she gives the young couple Gui Wu(Wang Yu) and Gan Lianzhu (Ching Ping) two important instructions to send them off. One: "mind your own business" and Two: "practice hard and revenge for your family." Needless to say they fail miserably at both instructions and end up right back in the hands of the evil Red Lotus Clan. Well, at least Gan Lianzhu does and she convinces Gui Wu to go back to her home and beg her family to come rescue her. The problem? They still have that big unresolved issue of them leaving home while her father was away in the first place. Oh yeah, he is not at all looking forward to the type of reception he will get when he arrives back at the castle and has to tell the family he lost their daughter to the  Red Lotus Clan. Speaking of the Red Lotus Clan, they are not at all happy to have lost one base of operations to the young couple and plan a very special hosts of welcomes for their anticipated return. Oh, it's on baby!

The cast of TWIN SWORDS, as in all perfect sequels is excellent. Everybody is back: in addition to Ivy Ling Po, Wang Yu and Ching Ping mentioned above, Lo Lieh is back as Du Zhuang and still so very much in love with Lianzhu. Bo Bo Fung is back as the high spirited Xiao Ling along with all of the very stern Gan clan elders and all the Red Lotus clan villains and so seamlessly they return I suspect the two movies came about in one big production and because of length became two movies -- but this is just my thinking and I have no inside source for my speculation. It is just that these two regular length movies could have easily had been on great big long all-star blockbuster instead of the two movies as they are presented. To tell the truth more that one reviewer has felt that as stand alone movies neither of them really do just that. You really need to see first TEMPLE OF THE RED LOTUS and them immediately THE TWIN SWORDS for one complete story. As I look back on it I don't completely disagree with them.

As for the kung fu, first of all there is more of it. I count nine fight scenes although the first is a re-play of the previous movie's finale but that still leaves eight fight scenes which alone is still enough to call this sequel "action-packed". The standard of quality of the fight choreography of the first film is also upheld in the second, namely the techniques displayed are realistic and to the point with very little flailing about to fake action BUT there is a major departure from realism in the final fight scene of the movie between the two grandmasters (the master teacher of the Red Lotus Clan and the Scarlet Maid). Fortunately it does not ruin the movie but I cannot say the movie benefits from it either. What I honestly believe however is that when the movie was released and the audiences first saw these effects they were probably blow n away by them. Sadly, it is just too late for me to feel that way.

THE TWIN SWORDS definitively concludes the story started in TEMPLE OF THE RED LOTUS. There are some very strong dramatic moments in the conclusion that marks this a wuxia tale worth watching again for the purposes of discussion. Finding a story of this caliber so early in the history of the modern kung fu era makes me wonder how the chop-socky  films of the 70's ever came about -but I digress. I strongly recommend THE TWIN SWORDS to anyone wanting to see a quality kung fu movie from any era.